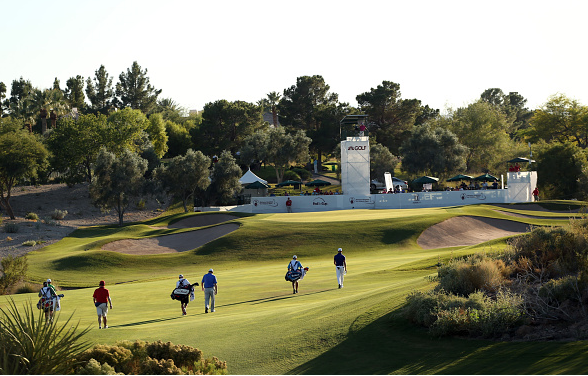 PGA Tour players have had three weeks to get their 2016-17 seasons off to a positive start, and many have taken advantage of it, most notably Hideki Matsuyama (WGC-HSBC Champion), Justin Thomas (CIMB Classic Winner), Brendan Steele (Safeway Open Victor), and Cody Gribble (Sanderson Farms Champion).

Their next opportunity comes in the land of chance, as the Shriners Hospitals for Children Open tees off in Las Vegas, Nevada this week.

The tournament has a history of paying off big jackpots to those who have put in the work. In 1991, Chip Beck shot the second 59 in PGA Tour history in this event. Among other low scores, J.J. Henry once shot a 60, and Smylie Kaufman turned up aces with a final round 61 to win last year’s edition.

The tournament was even known for awarding the biggest purse on tour for a time, apropos for an event that takes place in Vegas. The $6.6 million purse is now dwarfed by majors, playoffs, and WGC events, but the Shriners Hospitals for Children Open still draws a strong field.

All 140+ players will be crossing two of everything they have and hoping Lady Luck rewards them with favorable conditions and auspicious bounces.

Shriners Hospitals for Children Open began in 1983 as a five-round event. It was won by Fuzzy Zoeller. The following year, the tournament became the first in PGA Tour history to award a purse of over $1 million.

The Shriners has changed locations many times, but has always been held in the Las Vegas area. TPC Summerlin, designed by Bobby Weed/Fuzzy Zoeller, has been a host course since 1992, and in 2008 it became the sole, primary venue.

The event is also known for being the tournament where Tiger Woods scored his first PGA Tour victory, in 1996. The 20-year-old Woods defeated Davis Love III in a playoff. The event is also where the second-ever 59 in Tour history occurred. It was carded by Chip Beck in 1991.

For five years, the tournament was known as the Justin Timberlake Shriners Hospitals for Children Open, as the performer was a sponsor from 2008-2012.

The defending champion is Smylie Kaufman. In an unforgettable final round Kaufman, a rookie at the time, offset a seven(!) stroke deficit with a 10-under-par 61.

With the incredible Sunday, Kaufman came out atop a crowded leaderboard, winning by one shot over Patton Kizzire, Cameron Tringale, Jason Bohn, Alex Cejka, Kevin Na, and Brett Stegmaier. Na missed a 15-foot putt on 18 that would have forced a playoff.

Smylie Kaufman is one of the more well-known golfers on tour basically for two reasons, and both are largely related to Jordan Spieth. First, he played in the final group with Spieth at The Masters last year, his first Masters appearance, and just second appearance in any major. Secondly, he was 25% of the foursome that made up #SB2K16, the dream vacation to the Bahamas that induced envy all over the world.

What many people have forgotten (or never knew) about Smylie, however, is that the Shriners Hospitals for Children Open is the tournament that first put him on the map. His final round 61 made up a seven-stroke deficit and led to a victory in just the second tournament of his rookie season. The win kept him in the rookie of the year race all season, which he would closely lose to Emiliano Grillo.

Kaufman’s rookie season was very up-and-down and it is unknown exactly what kind of form he is in now. While he did play in the final group at The Masters, his final round 80 dropped him to a tie for into a tie for 29th.

The final round meltdown was excusable for a young player in his first Masters, but Kaufman largely struggled after that frustrating Sunday. He went on to miss eight cuts in his next 11 events, and didn’t really contend anywhere for the rest of the season. His T10 at the Quicken Loans National was encouraging, but was something of an outlier when looking at the second half of his season.

The week prior to his Shriners breakthrough last year, Kaufman finished T10 at the Frys.com Open, his first event of the 2015-16 season. This year, he is not quite coming in as hot, missing the cut at the season opening Safeway Open, and then finishing T45 at the CIMB Classic in Malaysia. He has shown the ability to compete anywhere, but is his current game good enough to successfully defend in Vegas? We will see on Thursday.

2. Ryan Moore: The Man to Watch

If everything is set up perfectly for one man to win this week, that man is Ryan Moore. Looking at all the internal and external factors, Moore is an easy favorite.

First off, this is something of a home game for Moore. While he grew up in the Seattle, Washington area, he was an amateur superstar in his days playing for the University of Nevada-Las Vegas. He was not just good as an amateur, he was one of the best ever. In 2004, his junior season at UNLV, Moore won the Ben Hogan Award, given annually to the best college golfer in the country. In that award-winning season, Moore won five major Amateur Championships: the U.S. Amateur, the Western Amateur, the U.S. Amateur Public Links, the Sahalee Players Championship, and the NCAA Championship. This is clearly a part of the country he feels very comfortable in.

Second, he has won this tournament before. Moore was the 2012 champion at TPC Summerlin (the same course this year’s event is being played at) when a first round 61 was the catalyst to a close victory over Brandon de Jonge, Jonas Blixt, and Jason Day.

Third, Moore is red-hot right now. Since mid-August, he has won the John Deere Classic, finished T7 at The Barclays, T8 at the Deutsche Bank Championship, and took Fed Ex Cup Champion Rory McIlroy four holes into a playoff at the Tour Championship.

The torrid stretch earned him a Ryder Cup Captain’s pick, which Moore justified by going 2-1-0 and earning the victorious Americans two points. He beat 10-time Ryder Cupper Lee Westwood 1-up in Sunday Singles.

Moore is currently the 32nd ranked player in the world, making him one of the highest ranked players in the Shriners field.

3. Cody Gribble: What to Expect?

Until the second round of last week’s Sanderson Farms Championship. Cody Gribble was a relative unknown on Tour. By the time the tournament ended, and Gribble had come back from a first round 73(+1) to shoot 63-67-65 to win by four strokes, and people were learning who he was.

Gribble is a rookie who was awarded his Tour card when he finished 24th in the Web.com finals. Despite just barely making it in, he has shown early that he belongs, finishing T8 at the season-opening Safeway Open before winning in Mississippi.

Brooks Koepka: Arguably the highest-profile player in the field, Koepka is making his second appearance since his great Ryder Cup performance, where he went 3-1-0, earning three points for the winning American team. In the biggest blowout in Sunday singles, Koepka obliterated Masters Champion Danny Willett 5&4. Koepka was T40 last week at the HSBC Champions. He had seven top-10s in 2015-16.

Jimmy Walker: Walker, the PGA Championship winner, was in third place going into the final round of last year’s Shriners. A disastrous fourth-round 78 (+7) caused him to plummet to T50. He bogeyed the first three holes, and then was unable to right the ship. Walker has been up-and-down since his breakthrough major victory. He missed the cut in his next two events, but was solo-third at the Deutsche Bank Classic. He made the Ryder Cup team, but was one of only two Americans (J.B. Holmes) to tally a losing record, going 1-2-0. He lost 3&2 to Rafa Cabrera-Bello in his singles match.

Billy Horschel: Horschel has not quite taken that next step he looked really for when he blitzed the competition on his way to the 2014 FedEx Cup title, but is still coming off a strong season where he finished in the top 15 in three of his last four events. He has played the Shriners just twice, finishing T16 in 2011 and missed the cut in 2014.

Graeme McDowell: This is the PGA season debut for the 2010 U.S. Open Champion, one of a small handful of former major winners in the field, joining Jimmy Walker, Keegan Bradley, Stewart Cink, Lucas Glover, Geoff Ogilvy, Davis Love III, Ernie Els, and Vijay Singh. In his first three events of the 2015-16 season, McDowell had a win, a solo-third, and a T6. He will be hoping to start off his 2016-17 in a similar way. Two weeks ago, he finished T4 at the British Masters, a European Tour event.