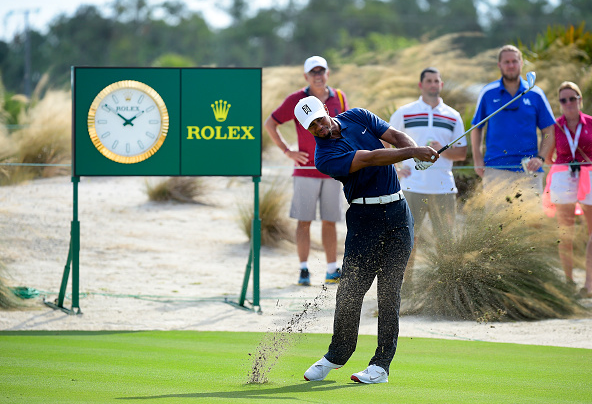 Yesterday, in his return from a nearly 16-month absence, Tiger Woods had an up-and-down round at the Hero World Challenge that started with him going -4 through 8, but ended with him limping to the finish line for a one-over 73.

As usual, Tiger emphasized the positives of his first round, and was determined to do better in round 2. Today, in pristine Bahaman scoring conditions, Tiger got off to another great start, but this time kept his foot on the peddle, posting a bogey-free seven-under 65.

Playing by himself due to the withdraw of playing partner Justin Rose, Tiger dazzled the galleries in a way we have not seen in years. For at least one day, it feels like the old Tiger might be back.

At -6 for the tournament, he is in a tie for ninth place and cut his deficit to six strokes from the lead, currently held by Hideki Matsuyama and reigning PGA Tour Player of the Year Dustin Johnson.

Dustin Johnson, who is as used to being in this position as anyone in pro golf, birdied three of his first four holes on the way to his second straight six-under 66. A birdie on 18 gave him a share of the lead heading into the weekend.

Hideki Matusyama, the recent winner of another elite field event, the WGC-HSBC Champions, got hot on the back nine and was six-under through 15 holes before his only hiccup of the day, a bogey on 17, lead to a five-under 67.

Justin Rose’s withdraw before the round allowed Tiger to play at his own pace, and nobody can say that he did not look comfortable out there. He hit a wall halfway through round 1, which was forgivable given the circumstances, but today we was fantastic from start to finish.

After struggling some with drives in round 1, Tiger missed only three fairways in round 2. He also hit 15 of 18 greens in regulation, and putted well. Also in round 1, Tiger played the two mid-round par fives (#’s 9 and 11) two-over par. Today, he was two-under on the same two holes.

Taking Off in Round 2

Defending champion Bubba Watson had as great of a start as anyone can have, shooting six-under in the first six holes (two pars, two birdies, two eagles). His 29 on the front nine was the lowest nine holes in the history of the Hero World Challenge.

He then played his back nine in two-under to finish with a nine-under 63, the low round of the tournament. Also on fire today was Brandt Snedeker, who birdied six of his first eight holes. He posted an eight-under 64.

J.B. Holmes found Friday much more difficult than Thursday, where he the 18-hole leader. A disastrous triple-bogey on 18 lead to a one-over 73, one of only two over-par rounds in the field. Holmes was fantastic on his front nine, but was five-over on the back.

The other over-par round came from PGA Champion Jimmy Walker. Walker bogeyed two of his first three holes, on the way to a two-over 74, which ties Rose’s round one for the worst round of the tournament.

“It feels good, I mean, as I said yesterday, I had it going through 8 holes and I lost it, finished over par. Today was different. I turned those two par 5s into under par, and that’s four shots right there. Consequently, I was able to play the middle part of the round better, turned it around, and kept the momentum going and I moved myself up the board.”
–Tiger Woods on his round 2 bounce back.