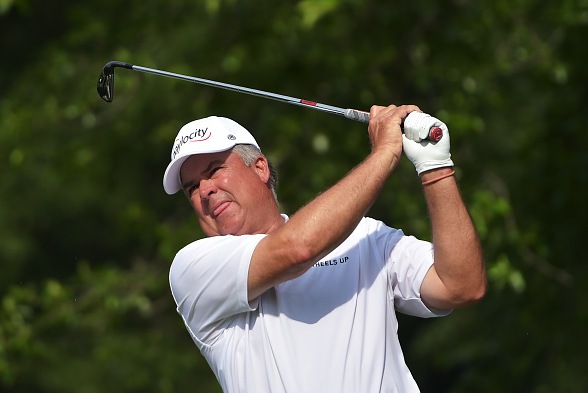 PEABODY, MA. – After two rounds of play at the 2017 U.S. Senior Open, Kirk Triplett and Kenny Perry sit at the top of a surprisingly red leaderboard at Salem Country Club.

Perry followed up an opening-round 65 with a 6-under par 64, despite a bogey-bogey start.

“I guess I was too anxious, too amped up. I was thinking, ‘Oh my goodness, I’m not going to break 80 today,'” Perry said.

After posting a couple of nerve-calming pars on 3 and 4, Perry was flawless the rest of the way, with eight birdies and no bogeys.

Triplett, who shot a U.S. Senior Open record-62 on Thursday, finished with a more pedestrian, yet still impressive, 3-under 67.

“I had a few rough spots and some nice saves, a little bit of good fortune too. Made some key putts,” Triplett said in a post-round press conference.

The 129 by Perry and Triplett is a new 36-hole U.S. Senior Open scoring record, breaking the mark set in 2013 by Michael Allen, a former college teammate of Triplett.

Scott Verplank (66) and nine-time senior major winner, Bernhard Langer (65), are tied for fourth at 8-under.

“As we always say, you can’t win the championship in the first round or in the second, but you can lose it by shooting yourself in the foot,” said Langer, who is seeking his second U.S. Senior Open title. “So I’m in a good place, but there’s a lot of great players around me.”

Fred Couples and Tom Lehman headline a group of four players tied at 7-under.

.@KennyPerryGolf bounced back from a bogey-bogey start to tie the #USSeniorOpen lead, earning him the @Lexus​ Top Performance of the Day. pic.twitter.com/ZT5YcVVlsM

Recapping the top moments from the second round of the #USSeniorOpen at Salem Country Club. pic.twitter.com/34prlYy9rh

“Well, in the position that I’m in, you have to adjust a little bit, right? You just can’t go willy-nilly and fire at every single one and hope your good ones outweigh your bad ones. But there will be guys that are trying to do that that are four, five, and six behind you. So you have to recognize that the number you’re sitting on may still not be good enough to win the championship. So you just kind of have to take the same mindset.”
–Kirk Triplett