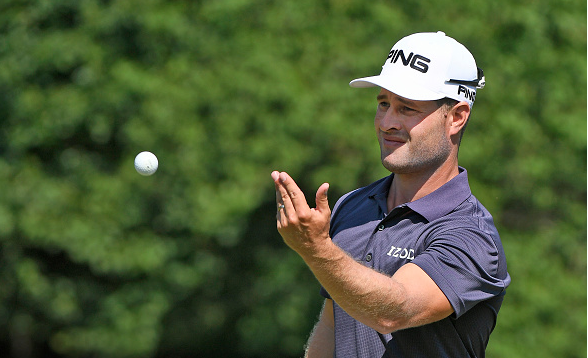 David Lingmerth posted a second consecutive 5-under 65 at TPC Potomac and takes a two stroke lead into the weekend at the Quicken Loans National.

The 29 year-old Swede, who won a Web.com Tour event at Potomac in 2012, posted a bogey-free round, which included five birdies, and sits at 10-under through 36 holes.

Daniel Summerhays followed up his opening-round 66 with a 2-under 68 on Friday and is alone in third at 6-under par. Rounding out the top 5 are India’s Arjun Atwal (67) and South Korea’s Sung-hoon Kang (69) who are tied at 5-under.

The tournament’s three marquee names have been MIA at TPC Potomac. Patrick Reed shot a 2-over 72 and is at 1-under. World No. 9 Rickie Fowler also posted a 72 and is at 2-over for the tournament. And Justin Thomas followed up his 74 with a 1-over 71 and missed the cut. It’s JT’s second straight cut, and fifth straight over-par round, going back to the final round at Erin Hills.

After a brutal start to the season, David Lingmerth has looked much better since May, making the cut in all six of his starts in the last two months, and only finishing outside the top 26 once.

At TPC Potomac, Lingmerth has been near flawless. After a round one 65 vaulted him into the 18 hole lead, the conspicuously short Lingmerth struck 65 again, this time with no bogeys on his card. He is tied for the field lead in birdies, carding one below par on a third (12/36) of the holes he has played.

Geoff Ogilvy made news recently when he passed up qualifying for the U.S. Open in favor of rest before the busiest part of his schedule.

It did not seem to do him much good in his first post-U.S. Open start, as he finished T69 at the Travelers (although he did have a second-round 65), but he has looked much more dialed in at the Quicken Loans.

He followed up a first-round 67 with a second-round 65, in which he birdied three of his first four holes on both the front and back nines. Ogilvy has eight career wins, but none since the 2014 Barracuda Championship.

It Has Been a Long Time

One of the most out-of-nowhere wins was at the 2010 Wyndham Championship, where little-known Arjun Atwal went from Monday qualifier to tournament champion, becoming the first Indian-born player to win on the PGA Tour.

Atwal, and the entire country of India, hoped it would lead to even bigger things, but Atwal was mostly disappointing during the two-year exemption he was awarded, and has played sparingly since.

Now, just playing his third tournament of the year (he missed the cut in the other two), Atwal is suddenly in contention at Potomac. He followed up a tremendous round one 68 with an even better round two 67. Atwal has been accurate, hitting 75% of his greens, and has been phenomenal on the greens, where he gained nearly four strokes on the field in round 2.

For those without intimate knowledge of the Champions Tour, Charlie Post is an amateur who is +31 after two rounds of the Senior U.S. Open. Nobody in the Quicken Loans field is anywhere near the Charlie Post zone, but the course has played tough, and many in the field are discouraged with what they have been able to do through 36 holes.

Perhaps the most disappointed is Justin Thomas, a three-time winner this season. Compared to the field, a second-round one-over 71 isn’t terrible, but combined with his first round 74, a round in which he had a quadruple-bogey 9 on the 10th hole, it left Thomas at +5, where he missed the cut by a stroke.

Since his record-setting 63 at the third round of the U.S. Open, Thomas has been nowhere near his best. He followed up that 63 with a 75, and his missed the cut in both tournaments he has entered since. He has shot all five rounds since the 63 at over par.

Troy Merritt is a former Quicken Loans champion, taking the 2015 edition off the strength of an incredible third-round 61. His knowledge of and confidence in the course showed in round one, where he had a bogey-free four-under 66. His second round, however, was an unbelievable 16 shots worse: a 12-over 82. Merritt double-bogeyed his first two holes, and then continued stumbling from there, carding six more bogeys and a triple-bogey. He was embarrassing inaccurate, hitting just 4 of 14 fairways (averaging 20 yards fewer off the tee than in round one), and 5 of 18 greens.

“Been in pretty good control of my game so far. Still 36 holes to go so looking forward to the weekend. I’m pleased with where I’m at. It’s so important to hit the fairways out here. I’ve been doing a decent job of that the first couple days.”
–David Lingmerth