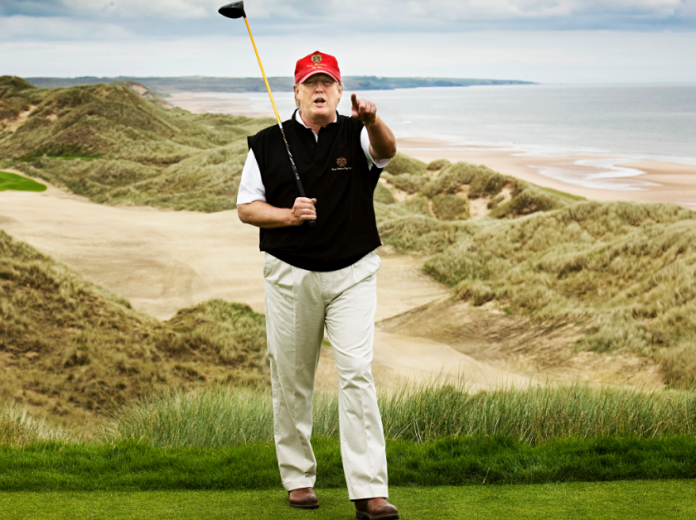 Donald Trump was at rally in Daytona, Florida today, describing his recent trip to Scotland for the grand opening of Trump Turnberry. The GOP nominee was on one of his rants about “crooked Hillary,” and describing how he didn’t want to be photographed with a golf club, to avoid it being used for political gain by Democrats.

But Trump, who speaks at rallies without teleprompter, in an off-the-cuff stream-of-consciousness style, brought President Obama into it as he mentioned “golf club.”

Trump said, “I said I don’t want to touch a golf club… unlike our president who plays more golf than people on the PGA Tour.”

After going on about trying to avoid being photographed with a golf club, Trump still had Obama on his mind, and joked, “I should play Obama for the presidency.”

He continued, “Then I’d be assured of winning.”

So would Trump really beat Obama in a golf match? Let’s go to the tale of the tape (er video).

Trump, the owner of several iconic golf courses including Turnberry and Doral, is reported to be a 3 or 4 handicap.

Obama, who is addicted to golf, and has reportedly played more rounds of golf than any president in history, is said to play to about an 18 handicap.

Ed Note: As the president, and the security needs, there are not many videos of President Obama playing golf. This one is from his early years, so he may have improved.

President Trump Tees It Up in Japan With Hideki Matsuyama