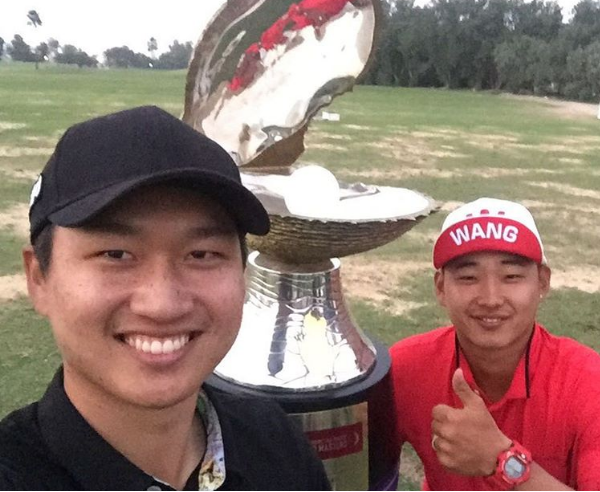 Jeunghun Wang won the Commercial Bank Qatar Masters in a playoff. It was the 3rd Euro Tour win for the 21-year-old star from South Korea.

But it was Wang’s caddie who stole the show on social media, with his funky looking cap.

Some of the feedback included: “When you caddy for me you shall wear this hat, lol” and “Couldn’t ever say he wasn’t ‘a company man’!” and “What an iconic hat!”

Up until last season (this past fall, into November) Wang wore a Callaway hat as did his caddie. But for the new season, the young star’s cap is logo-less, while his caddie is walking around with the Wang hat.

According to Wang, his sponsor gave him the “iconic” hat and the golfer passed it off to his caddie. Who has become somewhat of a star.

"My sponsor gave me the hat to wear but I don't use it, so my caddie decided to wear it. It's really cool." pic.twitter.com/NsZa1xxDrG

The obvious running joke is that with the cap, the caddie will never forget which bag to pick up.

No prizes for guessing who this guy is caddying for pic.twitter.com/RNpNUeIIXg

There's no chance of @ddubko forgetting which bag to pick up. @wang_jeunghun was -4 after his 68 today. #golf #dong #wang @callawaygolfeu

6 Koreans To Watch at The CJ Cup