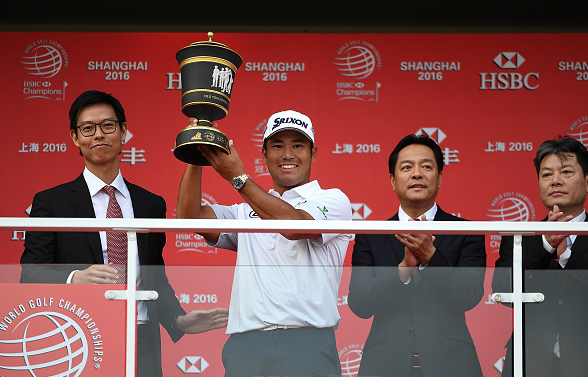 With his 3rd Tour victory, Matsuyami is now a safe bet to move up in the world rankings, where he is currently No. 10. Coupled with his second place finish at the CIMB Classic, it also moves him into the top spot in the FedEx Cup race, leaping over Justin Thomas.

After his round Matsuyami sat down with the press, who seemed less interested in his performance and game, and more fixated on his Asian race/ethnicity (naturally!).

And so he was asked about all the important things such as what it’s like be the first Asian to win a WGC; what it’s like to be the second Japanese player to win 3 times, and if he enjoyed playing with the Chinese (because they’re Asians too, I guess).

PRESS: What does it mean to be the first Asian winner of a World Golf Championships?

No player from Asia had won a WGC …

MATSUYAMA: You know, I knew Y.E. Yang won the PGA Championship, and actually, I was surprised when they announced that I was the first Asian to win a WGC event.

MATSUYAMA: That’s a tough question to answer. But Shigeki Maruyama is a good friend of mine, and he always said that I was going to pass his records. But at least I’ve tied him now. That was a great honor, because I have great respect for him.

PRESS: There are six Chinese golfers participating in this year’s WGC-HSBC Champions. Do you have any special moments with them?

MATSUYAMA: There were six Chinese players that played this week? I’m sorry, I don’t know all of them. However, I do know some of the pros from China who have played in some of the majors, especially in the Masters. They are tremendous players. Chinese golf has a bright future. It won’t be very long until there is going to be a Chinese player that will compete for a major title.