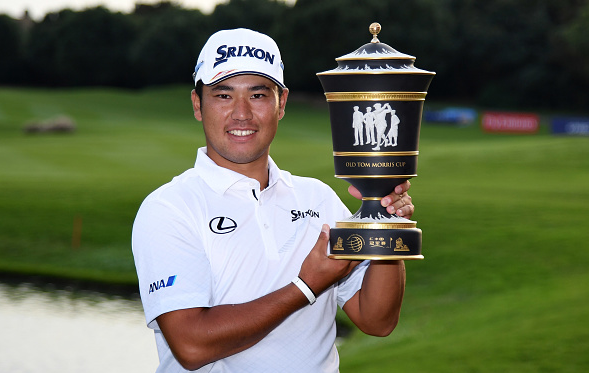 It took 18 years, but the World Golf Championships (WGC) finally have an Asian-born winner. Japan’s 24-year-old phenom Hideki Matsuyama went bogey-free for a second consecutive round to obliterate the field at Shenshan Golf Club in Shanghai, China.

With a final round six-under 66, Matsuyama made golf look easy, cruising to a seven-stroke victory over Open Champion Henrik Stenson and American Daniel Berger. It was the third career win for Matsuyama, the world’s 10th ranked golfer.

How Hideki Did It

Shenshan did not appear to be much of a challenge for Matsuyama, not only did he go bogey-free in his final round, but he went bogey-free over his last 45 holes. Those last 45 contained 15 birdies and 30 pars.

Sunday looked even easier than Saturday for Matsuyama, as he birdied the first hole, which he had been +2 on for the week, went under par two more times in his front nine, and later birdied 13, 14, and 15 to put the exclamation point at the end of his tournament score.

Nobody got close to Hideki in round four, with defending champion Russell Knox, who began the round as Matsuyama’s closest competitor, chopping his way to a two-over 74, and finishing 11 strokes back.

Matsuyama’s victory came in spite of him not being particularly accurate off the tees, as he hit just 55.4% of his fairways for the week, which tied for 43rd in the field. Most of his damage was done on the greens, where he led the field in putts per green in regulation (putts per GIR).

What This Means For Matsuyama

In his second event of the new PGA Tour season, Matsuyama posted his second consecutive high finish, winning easily the week after finishing second to Justin Thomas at the CIMB Classic in Kuala Lumpur.

The hot start to the 2016-17 season came after a strong 2015-16 campaign, which included a playoff win over Rickie Fowler at the Waste Management Phoenix Open, and top 10s at The Masters (T7), The Players (T7), the PGA Championship (T4), and the Tour Championship (solo-5).

With so many great finishes in elite-field events, Matsuyama will be among the favorites to come away with a major victory this season. If he does take a major in 2017, it will be the first of his career. The week before the CIMB, Matsuyama won the Japan Tour’s Japan Open, making this three weeks in a row with a top-2 finish.

Adam Scott dominated the weekend, going a tournament low 64-66 over his final two rounds. Unfortunately for Scott, he had already played himself out of the championship after a second round 80 that included six bogeys and two double-bogeys.

On Sunday, Scott eagled the par-5 second hole, in addition to the five other holes he went under par on.

Defending champion Russell Knox was unable to make it two in a row, falling far behind Matsuyama after a dreadful stretch of six holes mid-round that included five bogeys.

Olympic bronze medalist and American Ryder Cup member Matt Kuchar was unable to get anything going on Sunday, combining just two birdies with six bogeys to finish +4 for his round, and drop to -5 for the tournament, a tie for 21st place.

“You know, I really don’t know why I played well this week. The last three years, I’ve had to withdraw twice, and I didn’t play very well the other year, but I got off to a good start. I really didn’t make any changes to my golf swing or anything, but I have putted really well these last three weeks, and that’s probably the difference. I did play well today. I hit the ball a lot better, but putting was the difference this week.”
–WGC-HSBC Champion Hideki Matsuyama