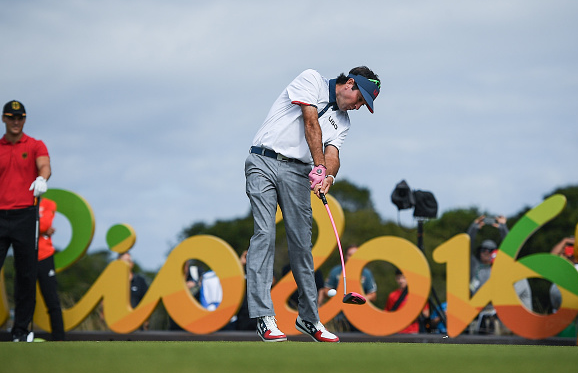 Today was the day everyone has been waiting for since October 9, 2009, the day it was announced that golf would be returning to The Olympics in 2016! Sixty golfers representing 34 countries are in Rio this week, attempting to medal for themselves and their home countries.

Day 1 could have been called, “The Marcus Fraser Show”. The Aussie, who qualified only after Jason Day, Adam Scott, and Marc Leishman all withdrew, put on a driving clinic, only missing one of the Olympic course’s wide fairways. He also hit 14/18 greens on his way to a dazzling round of -8 (63).

Fraser is a great fit for this course, as it resembles the Australia sand belt courses he plays back at home. Fraser holds a three stroke lead over Canada’s Graham DeLaet and Open Champion Henrik Stenson of Sweden.

A Major Week on the Champions Tour

The 50+ male crowd is in central Ohio this week for the U.S. Senior Open. As he did 34 times on tour, Vijay Singh is the current leader after round one. At -4, he leads by two over a group highlighted by Spanish major fixture Miguel Angel Jimenez.

Bernhard Langer, the man who is absolutely obliterating the Charles Schwab Cup Standings shot a surprisingly poor round of 3-over 73. Fan favorite John Daly is in 16th place, parring his final ten holes for a round of even-par 70.

The LPGA is off this week, in preparation for the Olympics. The women tee off next Thursday. World #1 Lydia Ko (NZL), World #2 Ariya Jutanugarn (THA), and World #3 Brooke Henderson (CAN) are all in the field

“It (the Olympic Experience) has been absolutely amazing. You know, the sad thing is, I shouldn’t say this, but golf gets in the way. I want to go to every event and tonight we’re supposed to go fencing then were gonna go to field hockey for the U.S. I met them last night so I told them I would show up; what a thrill of a lifetime!”

“A dream come true! I get to be an athlete, but also get to be a spectator. This is the greatest sporting event around the world. I mean, we have every different sport here, and now golf is in it. So it’s an absolute amazing, amazing time and I wouldn’t change it for the world, and like I’ve said before, golf gets in the way. It doesn’t matter what I shoot, I’m giving it my best effort, I had one bad swing today, but now I get to go be a fan and support USA.”
~ Bubba Watson, talking about how what the Olympic experience has been like.

Capybara Pic of the Day

The Olympics has been the first exposure of most of the athletes to wild capybara, the world’s biggest rodent. Today’s capybara pic of the day goes to Austria’s Bernd Wiesberger.

Product Placement of the Day

Smylie Kaufman is the new spokesperson for Natural Light. Not quite as perfect of a fit as Andrew “Beef” Johnston and Arby’s, but still pretty good.

Golf Commercial of the Day

We need to make this happen! Nick Faldo and Johnny Miller have nothing on this guy!

@OlympicGolf_IND has been following the two Indian players in the field, SSP Chawraisa and Anirban Lahiri. Whoever is tweeting for them has been hilariously ebullient.

After one round, Chawraisa shot even par, good for tie for 27th place, while Lahiri finished with a disappointing 3-over 74, and is currently in a tie for 50th in the 60-man field. This feed is enough reason for me to root for at least one of them to be in contention on Sunday. Lahiri especially needs to get his game going.

@anirbangolf – First Indian to have hit a golf shot in #OlympicGames.
History has been made! #Golf #IND @OlympicGolf @IndiaSports

Super! A birdie? at the end of Rd 1 for @anirbangolf!
Cards +3 for the day and is currently tied 47th. #Golf #IND @OlympicGolf @IndiaSports

A number of golfers have re-tweeted this. It’s the sign outside Jeunghun Wang’s locker (or maybe room, it’s hard to tell). He is one of two Olympic representatives from South Korea. With a first round 70 (-1), Wang is currently in 17th place.

Justin Rose with a hole-in-one! It is the first hole-in-one in Olympic play in 112 years.

Shot of the Day: Honorable Mention

Zac Blair took this picture at the John Deere Classic. Play was suspended for a considerable amount to time, and for good reason.

Exchange of the Day

Billy Horschel (@billyHo_Golf) held a question and answer session today. There were some entertaining exchanges, but this one was the best. Another note of interest: Horschel gets new wedges every six weeks.

Speaking of wedges, these are the news ones from Cleveland Golf. One of the many clubs that will be available beginning 9/16.

With the best golfers either playing in Rio, or taking the week off, The John Deere Classic had enough room to take golfers who do not qualify for tournaments often. One of those who got into the field is 2003 PGA Championship winner Shaun Micheel. Micheel is sitting at -2 after a round one 69, which put him just four strokes out of the lead.

Micheel made more money in that one victory, his only victory on tour, than he has in his last 72 events combined!