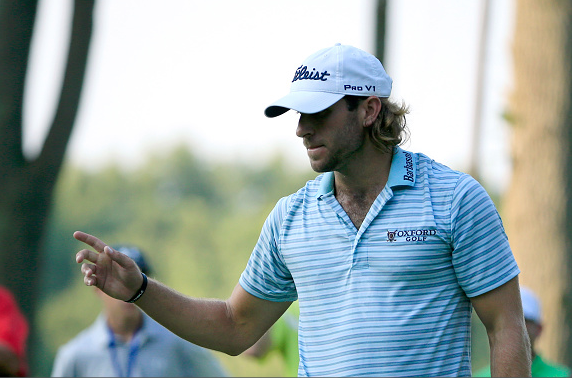 For the second week in a row, and third time this season, Andrew Loupe holds a first round lead in a tournament. With play suspended, Loupe needs to finish his round in the morning, but for now, he is back in that familiar place at the top.

Last week, Loupe followed up a first round 64, with a second round 76, and missed the cut entirely, his seventh consecutive missed cut. At -8 through 14 holes, Loupe leads by two strokes over Zach Johnson, Patrick Rodgers, and Ryan Moore, who have all finished their rounds.

Loupe was in the afternoon wave, and did not tee off until after rain storms had come through. Loupe went out in six-under 30, and kept the heat going on the early back nine with birdies on 11, 14, and 15. His 8 birdies lead the field, and he is also #1 in SG: putting.

A Familiar Face Near the Top

Zach Johnson’s last five starts at The John Deere Classic have been nothing short of spectacular: T3, 2, T2, WIN, T3. He is obviously very comfortable at TPC Deere Run, the tournament that is played closest to his native Iowa. It should not be any surprise that Z. Johnson is again near the top, currently in a tie for second place. He was bogey-free for his round, and at one point, made four birdies in a five birdie span.

Gillis Back in Form

Last year at this tournament, Tom Gillis was nearly the oldest first-time winner in two decades when he lost a playoff to Jordan Spieth. Gillis has been mostly AWOL since then, and this season has missed half his cuts with a high finish of T35. Being back in the Quad Cities seems to have re-ignited his great form. Through 16 holes, Gillis is back in the mix, T2 when play was halted.

Jon Rahm (+1) has been in tremendous form as of late, seemingly in contention every week since he turned pro after the U.S. Open. His card for next year is secure, but at a course that plays this easy, being over par through 8 holes is puzzling. He needs a win to get a FedEx Cup playoff invite. Streb (+4), the most recent member of the “63 in a major club” when he posted the score less than two weeks ago in the second round of the PGA Championship, a tournament he finished T7 in. A double-bogey on 18 put a poor finishing touch on his round, and now he’s 12 strokes out of the lead.

With so many top golfers either at The Olympics or taking the week off entirely, the John Deere Classic had available spots for a considerable number of players who do not usually qualify for tournaments. Here are a few of the more notable ones:

Shaun Micheel (-2, T37) – 2003 PGA Championship win is his only victory on tour. He has made less money over his past 72 events than he did for that one victory.

“This course is impressive as hard as it just rained, the greens were really not that soggy. Obviously there’s some moisture out there, but I was impressed.” ~ Ryan Moore, currently T2, on how the course played after the heavy rain.