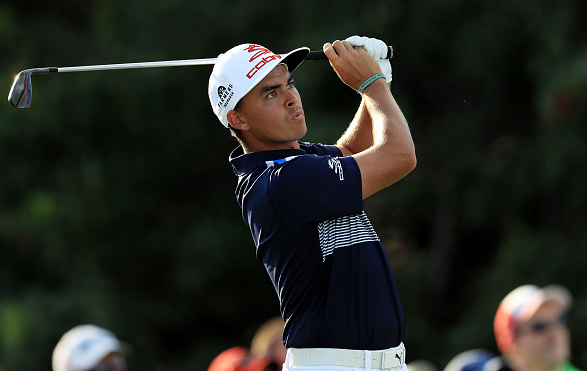 Rickie Fowler won The Honda Classic at PGA National by shooting a final round 1-over 71 – and finishing at 12-under for the tournament. The win was Fowler’s first in over a year, and it moved the former Oklahoma State star back into the top-10 in both the world ranking and PGA Tour Money List (er FedEx Cup standings).

After his round, Fowler sat down with the PGA Tour’s Doug Milne, and members of the press, for the obligatory press conference.

Rickie Fowler, congratulations on your fourth career PGA TOUR victory, and second in the State of Florida.

With the win, you are projected inside the Top-10 in the Official World Golf Rankings, inside Top-10 FedExCup standings and convincing way to get the job done this week and with that, I’ll turn it over to you on comments on doing just that.

Fowler: Well, it’s nice to hear the Top-10. I don’t think I’ve ever been this high, FedExCup, early in the year. It’s definitely nice after — we don’t get to play a lot of stuff through the fall really.

I had China, which almost doesn’t even count, it’s a whole other country, for FedExCup points until I played in San Diego and missed the cut. It’s crazy to see how far back you get. It’s not fun to see that number.

So I’m excited to be up there in the Top-10 and be back in the Top-10 in the world. I could feel this play coming, and I played well in Phoenix and kind of been just trying to dial some things in in the gym, on the golf course and practicing at home with Butch.

To be in the position I was after 54 holes here, give myself that cushion, allowed for a tough day today. With the wind, there weren’t a whole lot of low scores. I think there were some early on. Some guys made some good moves. But other than that, like I said, I gave myself enough cushion where I could kind of get away a bad nine, which I started with, and then lucky enough, the putter saved me at times and gave me that cushion I needed on 12 and 13, and made a great swing into 16.

Really, it was just get it to the house from there. I wish I wouldn’t have made the bad swing I did on 17. It really wasn’t as bad as it looked. I mean, wind is just pumping out of the left and just hung it up there in the wind right a little bit.

But still had enough going to 18. No, this is great. It’s going to be fun celebrating tonight and friends and family.

You said earlier in the week that you needed to start closing out these opportunities. Did you need this win today?

Fowler: Well, I’m a lot happier and tonight’s going to be a lot more fun, being that we have this.

It’s special to be able to pull it off, and it wasn’t the prettiest of ways to do it, but this isn’t an easy golf course and this wasn’t an easy day to go play golf on. Just had to fight through it. Mistakes were going to happen. Bad swings were always going to happen. You can’t play a perfect round of golf.

Just had to kind of keep moving forward, just try and get the most out of the round. You know, missing the putt on 9, I felt like that would have been nice to still have a good lead going to the back. But like I said, the putter did save me with some long birdie putts. Tonight will definitely be fun.

After your last win, you said it would take a major to join Jason, Rory and Jordan, a year later, throwing in Dustin and Hideki, where do you see yourself in that group?

Fowler: I mean, I still need to put myself in position, be consistent and win some more golf tournaments. Obviously seeing what Hideki was doing end of last year, start of this year; even Justin Thomas going on a run; Dustin’s always been an impressive player. I mean, what is it, ten years now, he’s won on TOUR every year at least once. And obviously Rory, Jordan, Jason; I’ll try and sneak in the back end right now.

But I want to continue to play well and I want to be, whether I’m talked about with those guys or not, I just want to play the best that I can and keep pushing myself and ultimately just keep trying to put myself in position to win and start collecting more of these.

During the telecast, Johnny Miller discussed the notion that you still need to learn how to close events like a champion regarding some of the miscues during the round. Wonder what your reaction was to that?

Fowler: Well, I started with a four-shot lead and I still won by four, so I didn’t play great. It wasn’t a pretty round. But we got the job done. A win’s a win.

You’re now part of a group of young players who have started off 2017 with victories so far. Just wanted to get your thoughts on what this kind of means for the game and how does it set the tone going forward?

And to have them texting me last night and wishing me the best, telling me to go get it done, it’s a fun group to be a part of because we all are trying to push each other to be the best players that we can be. We love seeing each other play well, and we love beating each other when search at their best.

I know there’s a handful of guys that aren’t here; some guys either take this week off, Rory being hurt. But still, like I said, it’s motivating when I see them play well. It makes me want to go out and do that.

YOU HAVE A MESSAGE

You said that Tiger texted you last night. Did you get any other support from, say, Jason or Jordan or any other players who weren’t here?

Fowler: I don’t want to go down a list too much. I don’t want to single anyone out. Rory did text me, Jordan obviously, Justin who was out on 18 green. It’s great to have the support of guys that I have either looked up to, enjoy watching, love seeing them play well, and I want to see those guys play well. And we all want to beat each other when everyone is at their best.

So you know, like I was talking about earlier, looking forward to having Rory back. Hopefully that’s this coming week. And then Jordan, I think we’ll see him next week obviously. It’s a lot of fun. We’ve got a great group of guys. I think there was — I had a bunch of texts. I didn’t get back to everything and there’s more. I still feel it going off, which is a good thing. We’ll deal with that later.

Definitely I’m happy and pleased to be in the position I’m in, and with the amount of great, young talent we have right now.

Is it strange not to go to Doral from here, considering for years? Realizing this wasn’t your schedule, but the TOUR from California to here to Mexico City, how hard is that in general terms for golfers?

Fowler: Yeah, I mean, it was always nice to be here at home. I would typically play Seminole, stay at home Monday night and then just drive down Tuesday. Maybe practice a little bit, play nine holes. Play nine or 18 on Wednesday and just play the tournament and drive home after.

It is a little longer travel to get there, and for guys that if they played possibly L.A. to here and then are going back down there to México, yeah, it’s a bit of travel. But I also started the year in Abu Dhabi and flew to San Diego, so that’s kind of hard to beat. Travel is what we do. I mean, the game is definitely worldwide. There’s a lot of guys that play both here on the TOUR, play some events on The European Tour. Some guys are dual members. Traveling is just part of what we do.

The 2022 Honda Classic: Money, Points Earned By Every Player