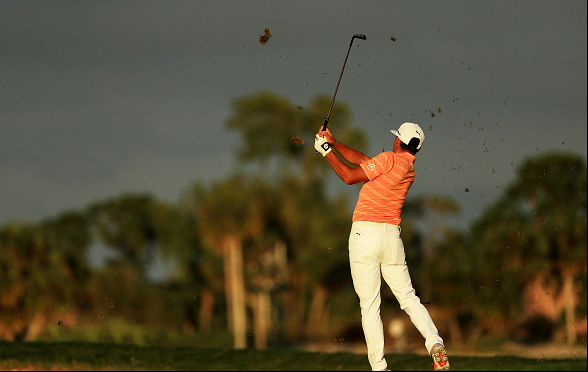 Rickie Fowler hung onto his 54-hole lead for the first time in his career and went on to capture his 4th PGA Tour victory at The Honda Classic. The win moved the 28-year-old former Oklahoma State star back inside the top-10 in both the world and PGA Tour rankings.

Gary Woodland and Morgan Hoffman finished in a share for 2nd at 8-under, 4 back of Fowler’s winning score.

Rounding out the Top-5 were Jhonattan Vegas, Billy Horschel, Chad Collins, Wesley Bryan, Martin Kaymer and Tyrrell Hatton – who all finished at 7-under.

To wrap up the coverage from PGA National and The Honda Classic, here are the 3 best shots.

Many players aren’t too happy when playing the “Bear Trap” but for Vegas, it was very different. Vegas stepped up to the Par-3 15th and struck the perfect tee shot that trickled into the cup for a hole-in-one.

It should also be noted that Vegas will be taking home a new car, courtesy of Honda!

During his opening round, Brehm faced a tricky distance from the left round on the Par-4 13th but that didn’t bother him. Brehm went on to hole-out from 74 yards and extremely close to the out-of-bounds line.

Ryan Brehm, just like he planned it. #QuickHits pic.twitter.com/2hZn9h6foP

After a rough weekend of 12-over-par, Brehm went on to finish 69th.

Fowler, who carried a 4 shot lead into the final round, had a very shaky start to his day and made the turn at 2-over. After birdies at 12 and 13, Fowler was back to even par on the day and 5 shots ahead of the field.

Fowler hit one of the better approach shots of the week into the 16th and went on to convert the birdie for a 6 shot lead with two to play.

It is, Rickie. #QuickHits pic.twitter.com/tMviBLVLbm

Fowler went bogey-bogey to finish 4 shots ahead of Woodland and Hoffman.