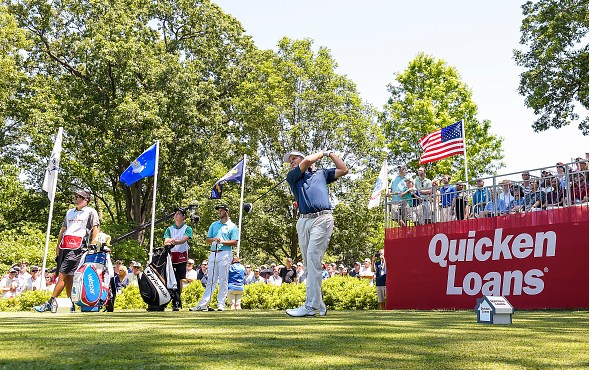 Winning on Tour is hard.

It’s been said (and demonstrated) many times. But with perhaps the most modest full-field event Tiger Woods has seen in years, this could be the week that he breaks through in his comeback and wins again.

At the very least, that’s the lead storyline going into the 2018 Quicken Loans National.

Just four of the current top-30 ranked players in the world will be playing this week, and only one from the top 10 — No. 8 Rickie Fowler. There will be some hungry younger guys who see this as a chance for a breakthrough win, like Beau Hossler and Kiradech Aphibarnrat, and some older guys who have recently gotten hot, like Stewart Cink and J.B. Holmes.

But out of the limited-size invitational field of 120, a lot of guys will go into this week thinking if they can make a few putts, they have realistic prospects for needing to stay around until early Sunday evening.

Making putts will be a big part of the story. The tournament changed venues last year to the TPC Potomac at Avenel Farm, and with a small set of greens that most players had no experience reading, scoring was modest. Reaching 7-under was good enough to get Kyle Stanley and Charles Howell III into a playoff, where Stanley prevailed.

Overall, the National produced the fourth-highest field scoring average of the 2017 season, with the par-4 No. 11 hole — a 470-yard beast with wooded trouble off the tee followed by wetlands guarding a long, angular green — ranking as the toughest hole of the entire season last year, playing to 4.521 strokes.

Even with a lot of familiar names missing, whoever is planning on winning this week will need his “A” game to keep things in order around this track.

Formerly known as the AT&T National (2007 to 2013), the Quicken Loans will tee it up for the 12th time this week – and for the second straight year at TPC Potomac at Avenel Farm.

Hosted by the Tiger Woods Foundation, and scheduled between the U.S. and British Opens, the Quicken Loans usually offers a relatively strong field, although that’s not been the case the past couple of seasons.

The inaugural 2007 tournament, held at Congressional, was launched with a tee shot by Geoiwas a three-stroke victory for K. J. Choi, who at the time was one of the top players in the world. Steve Stricker finished runner-up.

The future of the event after this year is unclear. Initially, this year’s tournament was without a sponsor, but Quicken Loans stepped up in late May to announce they would be the title sponsor for the fifth straight year. But Quicken will also be getting its own PGA event in its hometown of Detroit in 2019, leaving the future of the National, as well as a Washington, D.C.-based tour stop, murky.

And while the gritty championship effort of Tom Coughlin’s New York Giants got top billing, it may not have even been the most inspiring athletic accomplishment of the day.

Approximately twenty-five hours from the Super Bowl host city of Indianapolis, Ind., a young PGA Tour golfer named Kyle Stanley unfathomably overcame an eight-shot final round deficit to win the Waste Management Phoenix Open, just one week after having blown a six-stroke final round lead of his own.

That win, the first of Stanley’s professional career, was one that many thought would lead the then-24 year old to PGA Tour stardom.

Unfortunately for Stanley, his career has been a prodigious struggle. Since that win in 2012, right through early 2017, Stanley went winless with just three top-10s total – all of which were in a five-week spurt in 2013.

However, the man who completed an unbelievable comeback in Phoenix, rose like one in the 2017 season, netting high finishes in several big events (T4 at THE PLAYERS, T6 at The Memorial), and, after a final-round 66 at the Quicken Loans National, Stanley again was a tour champion, having overcome a four-shot deficit at the start of the day.

With a par on the first playoff hole, Stanley defeated Charles Howell III, to capture the 2017 Quicken Loans National.

Rickie Fowler plays a lot of good golf, but as he knows more acutely than anyone, he doesn’t win a lot.

The world’s No. 8-ranked player is enormously popular with fans and statistically among the best players in golf, but it very rarely has translated into a trip to the winner’s circle. Fowler, 29, owns just four career victories after nearly a decade of teeing it up on the PGA Tour.

How much that bothers him is anyone’s guess. He almost always maintains a positive demeanor, another reason for his popularity. He’s frequently close to winning, with a combined 20 career second- and third-place finishes.

He’ll likely surpass the $33 million mark in career earnings this week. To top it off, Quicken Loans is one of his primary sponsors.

Fowler would dearly love to win this week, and should have every opportunity to do so. He was the 2015 runner-up in this event, and the last he saw of the TPC Potomac course was a final round of 65 a year ago, which included his personal career best of nine birdies in a single round. That was good enough to get him into a tie for third place.

Right behind Fowler a year ago was Marc Leishman. In the prime of his career at age 34, the Australian was among eight players who finished T5 at last year’s Quicken Loans National. He has three career victories on Tour, with two of those titles coming last year – a surge that moved him as high as No. 12 in the Official World Golf Rankings.

Leishman enters the week holding down the No. 18 position in the world rankings, but has been either hit or miss this year with his three most recent starts resulting in MC, T45, and T62. These three finishes followed a solo second at the AT&T Byron Nelson.

The other two top 30 players in this week’s field are also international players: Italy’s Francesco Molinari and Thailand’s Kiradech Aphibarnrat.

Molinari, ranked No. 17 in the world, played respectably at the U.S. Open, finishing tied for 25th, and was brilliant in his previous two outings, the first two Rolex Series events on the European Tour schedule.

Molinari won the BMW PGA Championship and then placed second in the Italian Open. Aphibarnrat moved to his career high-water mark in the world rankings at No. 29 following a 15th place finish at the U.S. Open, and comes into this week now at No. 30. He missed the cut the week prior to the Open at the FedEx St. Jude Classic, but that was the exception after a run of excellence which included a tie for 30th at THE PLAYERS Championship, a tie for fifth at the BMW PGA and a tie for 13th at the Memorial.

Tour rookie Beau Hossler is another player who seems to have found his groove this spring. He narrowly lost to Ian Poulter at the Houston Open, and last week, made another run at the top, ultimately finishing in a tie for second at the Travelers Championship.

Kyle Stanley was a surprise winner of this event last year, but that victory seems to have righted the ship for a guy who has long seemed to have enough talent to win. Outside the world top 200 as recently as 16 months ago, he’s now up to his career-best ranking of No. 38 worldwide, with his latest surge built on a playoff loss at the Memorial and a tie for 15th last week at the Travelers Championship.

J.B. Holmes, who was ranked as high as 12th in the world in 2015 and then fell to 118th just a month ago, is suddenly torrid, and has to be considered a solid contender for this week. Apparently finding something at the Memorial, he posted a tie for 13th that week, which he has followed with a third-place showing at the FedEx St. Jude and then a tie for second last week. That has boosted him back to No. 75 in the world. The biggest caution would be that he’s still way down in the putting stats for the year, and he shot four over-par rounds on TPC Potomac last year, leaving him tied for the last spot among those who made the cut.

At age 45, Stewart Cink appears to be bathing in the same medicinal waters that have revived Holmes. After going all year without a single top 10, he’s burst into form in June with a tie for fourth at the FedEx St. Jude event and bettered that by matching Holmes with a tie for second last week. How he’ll like TPC Potomac remains to be seen, as he didn’t play in last year’s event.

Which finally brings us back to Tiger Woods. Hobbled so badly by his back a year ago at this time that he wasn’t sure he would ever play again, he has stunned the entire golf world with the speed and skill shown in his recovery, highlighted by his back-to-back top five finishes back in March. Since then, he’s continued to strike the ball well, but his scoring has fallen off.

The National is “Tiger’s tournament,” as it is presented by the Tiger Woods Foundation, and he has twice won titles in this event, the last coming in 2012 at Congressional Country Club. He last was healthy enough to play in this event in 2015. So can this be his week?

His challenge seems as much about regaining the inner conviction that he can win more than anything to do with his execution. The course is short enough at just over 7,100 yards to allow him to leave his sometimes-problematic driver in the bag much of the time. One of the game’s all-time clutch putters, he’s just 89th in strokes gained: putting on tour this year.

If he takes a liking on the first two days to TPC Potomac’s surfaces, perhaps Washington’s last tour visit for the foreseeable future will also be one of its most memorable.

THE FIELD: ODDS TO WIN

The PGA Tour moves to West Virginia for the newly named ‘A Military Tribute at the Greenbrier’ (formerly the Greenbrier Classic), where Xander Schaufele will defend his maiden Tour title against veteran lefty legends in Bubba Watson and Phil Mickelson. The Greenbrier is the second of three smaller events leading in to the season’s third major: the 147th Open at Carnoustie.