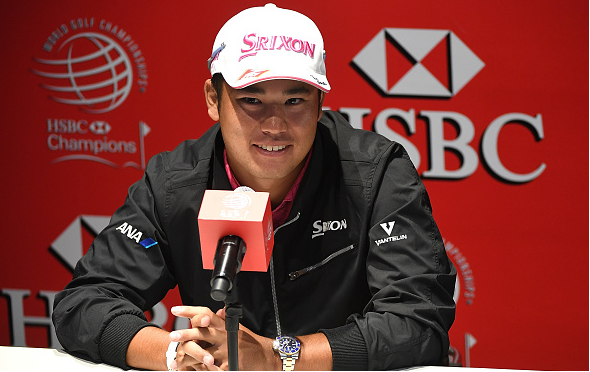 Hideki Matsuyami is the leader through 54 holes in Shanghai at the WGC-HSBC Champions. The 24-year-old Japanese star heads into the final round with a 3-shot lead over defending champion Russell Knox.

After his 3rd round, Matsuyami sat down with the media to discuss, among other things, his final hole, his new equipment, and legendary Japanese golfer Jumbo Osaki.

First, Matsuyami takes us through the final hole, shot by shot, giving credit to his caddie for what he called an “easy birdie.”

PRESS: Can you go through the last hole, please, the shots you played and how important it was to make birdie and get one extra stroke lead.

MATSUYAMA: The tee shot, it’s daunting. That lake is on the right side. So what I’m trying to do with the tee shot there is to put it in the fairway. I was lucky enough to get it on the right side. I had 248 yards to the pin. Hit a 3-wood, faded a 3-wood in there. I had about a 25-footer for eagle.

I wasn’t sure the line, so I asked my caddie, Daisuke Shindo, and he read the line, and almost; so it was an easy birdie.

It was a big birdie. I mean, to take the lead from two strokes to three.

As the first Japanese pro golfer to be ranked inside the Top 10 in the world since the Jumbo Osaki, Matsuyami says it means a lot and that he has “great respect” for “Jumbo-San.”

PRESS: You are the first Japanese player to be Top-10 in the world since Jumbo Osaki. I’m curious what kind of inspiration or relationship you have with Jumbo, and do you call him Jumbo or Mr. Osaki?

MATSUYAMA: Great respect for Jumbo-san. Jumbo-san is what I call him. Historically, his records will probably never be, probably anyone will come close to. I played with him once on the Japan Tour. At the time, I probably didn’t realize how great he has been to the game of golf in Japan. But since turning pro and going over the records and seeing all that he’s done, I have nothing but great, great respect for him.

Finally, Matsuyami gives an answer to a question related to his equipment in classic Hideki form.

PRESS: One month ago, you changed your clubs, your driver. What was the problem and why did that change happen?

MATSUYAMA: You’re correct. I did change drivers about a month ago. But here I can’t really discuss it in detail. I’ll probably switch back to that old driver shortly.