If the month of March has taught us one unassailable truth, it’s this: everything is better with brackets – including politics.

It also extends to golf, as the top players in the world prepare for the rigors of head-to-head competition in the WGC-Dell Technologies Match Play.

Featuring 64 of the world’s best golfers (the entire field is ranked inside the world’s top 69), the Match Play is composed of five jam-packed days of elite-level match play golf.

Held in Austin, Texas, the tournament offers dramatic showdowns, exciting storylines, and maybe best of all – a chance at redemption for those who foolishly had SMU making it to the NCAA Men’s Championship Game. Not that we’re referring to anyone in particular. Nobody is THAT stupid.

This week’s Primer is powered by Taylormade Golf Store at Amazon, the brand Dustin Johnson and Rory McIlroy rely on.

While match play tournaments have a lengthy history on the PGA Tour – even outside of the Ryder and Presidents Cups, the WGC-Match Play is currently the only regular match Play event on Tour.

Debuting in 1999, the same year the World Golf Championships series started, the inaugural event was won by Jeff Maggert, a No. 6 seed in his region, who impressively knocked off the gauntlet of Fred Funk, Nick Price, Bernhard Langer, Tiger Woods, and Steve Pate – before outdueling Andrew Magee in a marathon final that needed 38 holes (the 36-hole final plus two sudden-death holes) to complete.

In its 18 previous editions, the tournament has produced one three-time champion (Tiger Woods), and a pair of two-time winners (Geoff Ogilvy, Jason Day). Tiger had perhaps the most impressive victory in tournament history, when he obliterated Stewart Cink 8&7 in the 2008 Finals.

The defending champion of the WGC-Dell Technologies Match Play is Bubba Watson. The victory was the two-time Masters winner’s second of three wins on the 2018 season, and his 11th career PGA Tour title.

Getting into the final 16 bracket off the strength of a 2-0-1 record in pool play, Watson thwarted Brian Harman on Saturday morning before smashing Kiradech Aphibarnrat in the quarterfinals to set up a final-four match with world No. 2 Justin Thomas, who would have overtaken the No. 1 spot in the world rankings with a victory in Austin this week.

Watson was clearly not intimidated by Thomas’ lofty ranking, winning the first hole and never trailing in a 3&2 victory.

In the other final-four battle, Kisner needed 19 holes to put away Alex Noren, and perhaps the extra fatigue was a factor in his abysmal start against the recently-reborn Watson that dug a hole too deep to emerge.

In the current format, players in the field will be seeded Nos. 1-64, according to their position in the Official World Golf Rankings as of Monday, March 25. The top-ranked player in the field this week is Dustin Johnson with Luke List (No. 69) slotted as the tournament’s highest seed at No. 64.

Once the players are assigned a ranking number, all are placed into one of four (4) pools, according to their ranking.

Once the four pools are set, 16 groups will be formed, made up of one player from each of the four pools with Pool A (Nos. 1-16) players each heading one of the 16 groups. 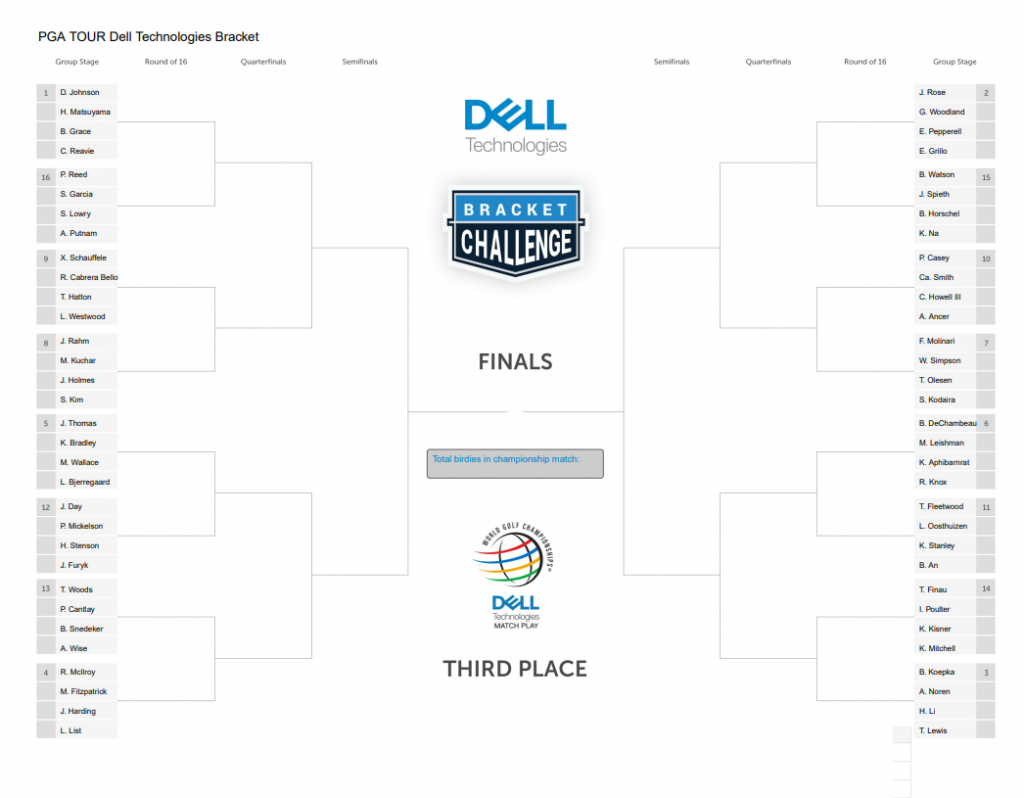 The top 64 players in the Official World Golf Rankings were invited to the WGC-Match Play. A few withdrew, and they were replaced by the next highest ranked available players.

Favorites include former winners Dustin Johnson and Rory McIlroy, who both check in at 9-1, with Justin Thomas (14-1) and Jon Rahm (16-1) the next closest.

Joel Cook and Carey Hoffman contributed to this report.