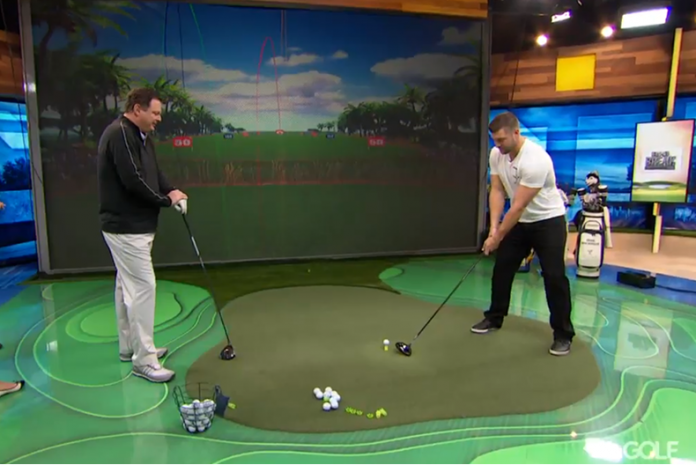 In today’s PGW Daily, we talk the Ryder Cup at Gillette, Tim Tebow, Danny Willett, and Inbee Park. We will also show you why we are jealous of the Euro Tour players this week.

The members U.S. Ryder Cup team were named honorary Patriots for a day. Rumor has it that Roger Goodell has already fined Jim Furyk $25,000 for his uniform violation.

The #Patriots are on the road, but another team – @RyderCupUSA – hit the @GilletteStadium field tonight: pic.twitter.com/S6A94DQAzY

DL3 got some practice in while at Gillette.

Awwww Pic of the Day

Graeme McDowell may not have made the cut for the European Ryder Cup team, but it looks like the father of a new baby boy is having a great week anyway.

Bravest Pic of the Day

Danny Willett’s brother took a walk on the wild side.

Mesmerizing Image of the Day

A pro-tracer and amazing scenery.

Scenic Pic & Video of the Day

Speaking of this week’s European Tour event, some captured an incredible shot of Anthony Wall hitting from the clouds.

Tyrrell Hatton took a video of a similarly incredible view.

Humble Story of the Day

Shane Lowry made a questionable decision playing in Europe last week rather than New York, which knocked him out of the FedEx Cup playoffs. Lowry has accepted his fate, and is extra motivated to make the next European Ryder Cup team.

Shane Lowry: Darren was right. I didn’t perform when it mattered https://t.co/boBb5o6JMG

Olympic Gold Medalist Inbee Park has withdrawn from next week’s Evian Championship, the last major of the year. She cites the thumb injury that has cost her most of this season. Impressively, she was able to hold it together in Rio.

Re-tweet this post from ISM (International Sports Management) for a chance to win a bag, glove, and hat all signed by Masters champion Danny Willett.

Make sure you enter our competition before tomorrow! RT & follow for a chance to win @Danny_Willett bag, glove & hat pic.twitter.com/h1GeduSt1t

Contest of the Day Part II

Your good idea could win you a “The Buck Club” hat courtesy of Zac Blair.

Anyone got any good ideas for @TheBuckClub ? Best idea wins a TBC hat!

Embarrassing GIF of the Day

Started the walk a little early. I hate it when that happens.

When you walk it in, but it doesn't drop.#OEM2016 pic.twitter.com/ms2GstNdtk

This is the SrixonZ765, one of the most attractive drivers we have ever seen. Hit the ball better AND look more stylish while doing so!

Putting in the Work

Ben Crane’s 2016 season might be over, but it is never too early to start practicing for next season. On a side note, the word “putting” looks odd in this context (it is not a pun), although I’m pretty sure it is correct.

2016/17 season prep already underway at @MyTPI. Using @v1sports and @boditraksports to evaluate how I use the ground pic.twitter.com/HOn9Xhvsva

If this whole baseball thing doesn't work out, we could get you a @WorldLongDrive spot. 343?! pic.twitter.com/clVYDCqfFc