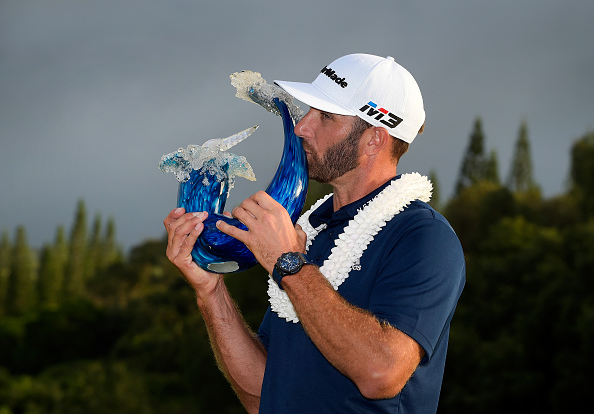 Dustin Johnson carded an 8-under 65 on Sunday to win the 2018 Sentry Tournament of Champions by eight strokes over Jon Rahm. The title is the 17th of Johnson’s PGA Tour career, and second at Kapalua’s Plantation Course, having also won in 2013.

“I didn’t want to let up on the back nine, especially after what had happened in Shanghai,” said Johnson. “Yeah, I didn’t want that to happen again. So but, today was a great day. I really felt like I drove it well. I did a lot of things very well, but the driver was the biggest thing. I put the new M4 driver in last week and I drove it fantastic this week.”

Johnson has now won at least one PGA Tour event in 11 consecutive seasons, dating back to his rookie season in 2008 – the longest active streak on Tour.

Rahm finished with three birdies on his final five holes to reach 4 under on the day, edging Brian Harman by one stroke for solo-second place at 16 under.

“So we all — I think I knew the fact that after what happened then (in China), he also had a big lead here, he was going to play good. I mean when he was 5-under through 11, I think we were all looking forward to finishing in second place. At least that was my battle for the last six holes,” admitted Rahm, who posted his fourth career PGA Tour runner up in just 33 starts.

The performance earned Rahm $735,000, 300 FEC points, and 34 OWGR points, which bumped him ahead of Justin Thomas for the No. 3 spot in the world rankings.

Harman, who started the day just two back of Johnson, finished with a 1-under 72, good for third place at 15 under. It was the former Georgia Bulldog’s fourth top 10 in as many starts on the new season – three of those top 5s.

“Well, this is my fourth week of the year. We started long ago for this year. I’m pleased with the way the year’s going. I’ve been working hard and I look forward to next year,” said Harman, who is also clearly confused by the PGA Tour’s schedule.

It was Perez’s third top 5 in just five starts on the new season. The 41-year old Arizona State product is now ranked No. 16 in the world, after entering last season ranked outside the top 300.

“I know I can go and play with anyone in the world. You see guys win usually when they’re just playing better than other guys. Obviously Dustin’s very talented, he’s No. 1 player in the world, but I wouldn’t say that I doubt myself against him,” answered Fowler when asked if it’s hard to “keep pace” with DJ.

“Yeah, obviously winning every year out here on Tour so far is big for me. I’m very proud of being able to do that. It’s not easy to win out here.

The guys out here, especially, even — it doesn’t really matter. Any given week anybody in the tournament can win it. It’s not like a lot of these other sports where the No. 125 guy is not ever going to beat the No. 1 guy. In golf, it doesn’t matter, anybody can win in any week. It’s very hard.

For the first few years, I guess, I only had maybe one win. A lot of seasons I’ve only had one win, but last year was my most and hopefully I can do even better than that this year.”
– Dustin Johnson, Winner, Sentry Tournament of Champions