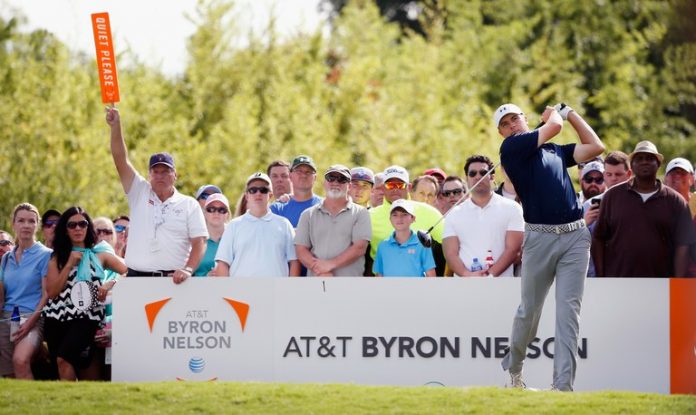 Nothing throws a wild card into a tradition-laden PGA Tour event like a new venue. That’s exactly the scenario the field faces this week when the 2018 AT&T Byron Nelson, the tour’s ninth-oldest event, moves 20 miles southwest in Dallas to the Trinity Forest Golf Club.

Trinity Forest is not exactly a forest. In fact, there’s not a single tree on the grounds. But the name didn’t come about out of irony, but instead for the heavily wooded area that surrounds the course. The new location marks the end of a 35-year run for the Nelson at the TPC Four Seasons Resort and Club in suburban Irving, Texas.

The design team of Ben Crenshaw and Bill Coore crafted the layout on a former landfill, which was the reason no trees could be planted. So obviously, Trinity Forest plays as a links-style course.

Coore and Crenshaw have a long and strong track record, including designing the Plantation Course at Kapalua, which hosts the Tour’s Sentry Tournament of Champions each January. They were also entrusted with restoration duties for Pinehurst No. 2 prior to its hosting in back-to-back weeks the 2014 U.S. Open and U.S. Women’s Open.

So who will become the first Nelson champion at Trinity Forest? There’s too much uncertainty to anoint a clear favorite. The field is decent, with six of the current world’s top 30 players, with Texans Jordan Spieth, Jimmy Walker, Beau Hossler and Ryan Palmer possibilities for claiming home-field advantage.

But this week also has to appear as an opportunity for less-known players looking to make a name for themselves. Almost no one comes in with a significant course knowledge advantage, or disadvantage.

Here are more details about what’s coming up this week.

Located up until this year in Irving, Texas, a suburb of Dallas long-known as the home of the Dallas Cowboys (until Jerry’s World opened in 2009), the Byron Nelson has been played in the Dallas-Fort Worth area since 1944.

Called the “Texas Victory Open,” the $2,000 grand prize in that first 1944 tournament was awarded to Dallas native Byron Nelson, when he won the inaugural event by an unbelievable 10 strokes over 17-time PGA Tour winner Jug McSpaden.

At 8-under par, Nelson was the only player in the field who broke par. The tournament produced an impressive list of winners in its infancy, with Sam Snead, Ben Hogan, Peter Thomson (his only victory in the U.S.), and Julius Boros all taking at least one title in the tournament’s first eight editions.

Watson holds the tournament record for most victories with four, followed by three from Snead, and two apiece by Nicklaus, Bruce Lietzke and Sergio Garcia.

In 1968, the tournament officially incorporated Nelson into its name, the first time a tournament was named after a player.

Since 1986 until this year, the Byron Nelson had been held at what is now the TPC Four Seasons Resort and Club.

Billy Horschel won the 2017 AT&T Byron Nelson, edging former World No. 1 Jason Day in a playoff. It was the former Florida Gator’s first PGA Tour title since the 2014 Tour Championship, and the second straight year the Nelson had been decided by a playoff.

Both players finished at 12-under par, but Horschel was able to tap-in for par on the first playoff hole, while Day missed what looked like about a 3 1/2 footer which would have forced a 2nd sudden-death hole.

The catalyst for Horschel’s victory was holing a 59-foot putt for birdie on No. 14, the longest made putt of his PGA career. It was timely, too, as he was two behind at that point.

James Hahn, the 54-hole leader, finished solo third at 11-under, while 36-hole leader Jason Kokrak ended with a 10-under for his four rounds (T4) of golf at TPC Four Seasons.

When in doubt, go local.

That may be the easiest rule of thumb for sorting out the field at the 2018 AT&T Byron Nelson at its new venue, Trinity Forest.

As both the highest-rated player in the field — No. 3 in the world — and a native of Dallas, Jordan Spieth tops the list of contenders. And, surprisingly, perhaps he won’t be that disappointed with a new venue for the Nelson.

He’s played in the event eight previous times, and never has done better than the tie for 16th he posted in his first appearance, as a 16-year-old amateur.

Spieth’s putting has uncharacteristically given him trouble at key moments this year, but he’s battled through it with a tie for third in late March at the Houston Open and a solo third at The Masters, followed by his most recent appearance — a tie for 41st at THE PLAYERS Championship, where a Saturday 65 had him in the top 10 before he finished with a final round 74.

Jimmy Walker is another Texan and known as a good wind player, and wind should certainly be a factor on wide-open Trinity Forest.

Walker is bouncing back solidly this year after a battle with Lyme disease last year, with three top 10s since February moving him up 25 spots in the world rankings to his current No. 56 ranking.

Pre-illness, he had been as high as No. 15 after winning the 2016 PGA Championship. Walker is coming in off his best showing yet, a tie for second at THE PLAYERS.

Tour rookie Beau Hossler, a California native who played golf at Texas and now lives in Dallas, is the player most likely to have a course familiarity edge — he is a member at Trinity Forest.

Hossler is riding a streak of six straight made cuts, with his best finish on tour coming during that stretch — a solo second at the Houston Open in April.

Another Dallas resident in the field is another player known for his skill in windy conditions, Ryan Palmer. The tour veteran is coming off a tie for 23rd last week, which saw him play his final three rounds in 11-under par.

Want one more wind specialist? How about Australian Marc Leishman, the fourth-highest ranked player in the field at world No. 16. He’ll be making just his third start since The Masters, where he recorded a ninth-place finish. Just ahead of him at No. 14 in the world is a wild card player to match the wild card course, Sergio Garcia.

Predicting Sergio’s game on a week-by-week basis is practically impossible. He had a stretch of three-straight top 10s in March, then missed three-straight cuts. He was tied for 11th after two rounds of THE PLAYERS at 7-under par, but then posted weekend scores of 75 and 76 to finish in 70th place. But he’s the only player in the field with multiple Nelson victories, having won this event in 2004 and again in 2016.

While Sergio has been mercurial, Matt Kuchar has been a model of quiet consistency. The world No. 22 player has smoothly been gliding along this year, with a pair of top ten finishes two months ago followed by top 30s in four of the last five events, including a tie for 17th last week.

Kuchar also has a very strong record at the Nelson, having never missed a cut in 10 starts and placing in the top 10 four times, including a third place finish two years ago and a tie for ninth last year.

Finally, you have to take into account defending champion Billy Horschel, another guy who tends to run hot and cold. His victory last year came after he had missed four-straight cuts, and then he followed with two more top-five finishes in June of 2017.

This year he comes in pre-heated, having a tie for fifth at the RBC Heritage followed by an 11th-place tie at the Valero Texas Open and then winning (along with partner Scott Piercy) the Zurich Classic of New Orleans. Horschel then posted a tie for 37th last week at THE PLAYERS.

FIELD: BY THE NUMBERS

Place your bets on the AT&T Byron Nelson at Bovada.

1. SPIETH, THE GOLDEN CHILD
There is no debate about who the star of the AT&T Byron Nelson field is: it’s Jordan Spieth. Ranked No. 3 in the world, Spieth is not only the highest ranked player in the field (No. 9 Hideki Matsuyama is second), he gets what is essentially a home game as the Dallas native is member at Trinity Forest Golf Club.

2. HORSCHEL DEFENDS
Billy Horschel did not come into last year’s AT&T Byron Nelson in the best form. The former FedExCup Champion who put together an all-time great playoff run in 2014 had not won again since. He had failed to qualify for last year’s Masters and when he stood on the tee at the Byron Nelson, he had missed his previous four cuts. He needed the win. Badly.

3. KUCHAR’S DROUGHT
The 2018 PGA Tour season has seen the end to some significant winless droughts from great players. Phil Mickelson broke a five-year drought at the WGC-Mexico Championship. Paul Casey won for the first time since 2010 when he took the Valspar Championship.

4. SERGIO’S STREAK
Ranked No. 14 in the world, Sergio Garcia, a man with 33 professional victories, is the third highest ranked player in the AT&T Byron Nelson field. That alone should give Sergio tremendous confidence going into the week, but with his recent form, that is not likely the case.

5. WALKER’S RENAISSANCE
Jimmy Walker, a Texan, should feel at home this week at Trinity Forest. What should be making him feel even better though, is that he has finally rediscovered his form over his past four starts.

Read the storylines in full here.