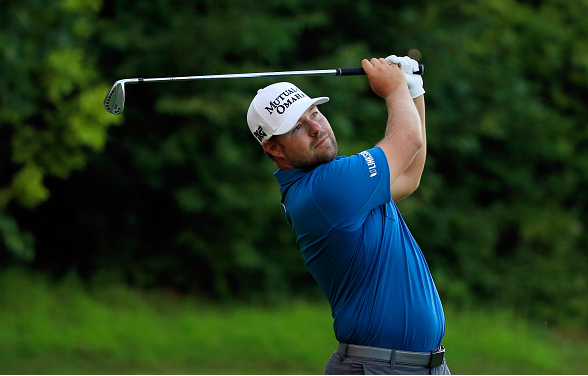 For a long time reRyan Moore has been considered one of the better players on tour, but never in that upper echelon that he was expected to reach during a celebrated amateur career.

From October to March, Moore looked like he was determined to make the 2016 season special: he had five top-10 finishes in nine starts, including a solo-third at the Valspar Championship and a T5 at the Dell Match Play.

Since that WGC event in mid-March, Moore has struggled to keep form. He missed three cuts in a row before putting up a long series of mediocre finishes, with nothing higher than T32.

However, last week at The Travelers, while Moore did not really contend, he posted a pair of 66s on Friday and Saturday, which led to a respectable T17.

Now, after a third consecutive round of 65 at The John Deere Classic, Moore is in great position to come out in front, as he leads by one stroke over Morgan Hoffman and Ben Martin.

If Moore can hold onto the lead, it will mark three consecutive years with a victory.

Moore has been consistently great all week, and today was no different. Moore was bogey-free, and six birdies meant a 65 for the third day in a row. Moore has only two bogeys all week and leads the field in GIR, hitting an astonishing 85% of his greens.

Morgan Hoffman is having a nightmare season, missing 13 cuts in 23 starts, with no finishes better than T11. From tee-to-green, he has been among the worst on tour this season. He ranks 183rd in GIR, and 164th in scoring average.

Ben Martin birdied his first five holes on his way to matching Hoffman’s 62. Currently on the FedEx Cup bubble, a good finish will put Martin securely into the field.

Shaun Micheel, the winner of the 2003 PGA Championship, and nothing else, does not have a top-10 since 2010. Over the past five seasons, Micheel has only qualified for 25 events, and made the cut in only 8 of them.

Able to qualify at TPC Deere Run, Micheel is making the most of his most recent opportunity. A third consecutive round in the 60s has Micheel at -10.

At T16, he is a long way back of Ryan Moore, but this is an impressive turnaround for the man most believed did not have it anymore.

“I think I’m now in really good position to get into Sunday tomorrow, If I can finish in top 3 or top 2, even if I could win, which would be really awesome, I don’t expect that much really” ~ Whee Kim, who started the week 154th in the FedEx Cup standings, on his chances of getting into the playoffs.