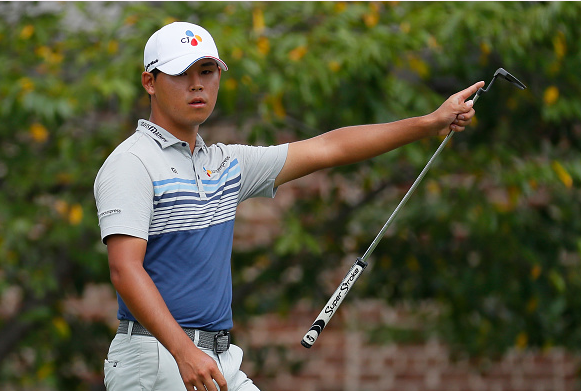 One negative of the 58 that Jim Furyk shot a few weeks ago is that it took some of the mystique out of the number 59. Today, in round 2 of the Wyndham Championship, two unheralded golfers just barely missed attempts at 59, a number that does not seem quite so low anymore.

One of those golfers, Si Woo Kim, settled for a 60, while Lucas Glover, traditionally a poor putter despite being an amazing ball-striker, also botched the comeback putt and walked off the 18th green with a 61.

As for the tournament, as the last regular season event, players have a lot riding on this week. Playoff hopes for some, Ryder Cup hopes for others, but there’s nobody in the field who would not enormously benefit from leaving Greensboro with a high finish.

Si Woo Kim was unstoppable today. He went out in a Jim Furykesque 29 with six birdies, and then came in with an eagle and two birdies. He was agonizingly close to a 59 when his 50 foot attempt on number 9 (his 18th) slipped past the hole.

Through two rounds, Kim leads the field in bridies and putts per GIR. Today, he hit 17 of 18 greens in regulation. With a win, Kim would catapult into the top 15 of the FedEx Cup standings, giving him a tremendous chance of getting to East Lake.

Bouncing Back
Patrick Reed looked like he was going to miss the cut and severely hurt his Ryder Cup chances, but birdied his last three holes to make the cut on the number. Kyle Stanley started the tournament at 127th in the FedEx Cup standings, with the top 125 after this week making the playoffs.

Jimmy Walker followed up a disastrous first round 74 with a two-under 68. He still missed the cut, but not by as much as it looked like he might. Derek Fathauer was in third place to start the day, after an opening round of five-under. Today, he shot 73 and missed the cut by one.

J.B. Holmes is in a tailspin lately, and desperately needed to at least make the cut to keep his Ryder Cup hopes alive. He followed up an opening round 68 with a 71 and will miss the weekend. Ernie Els’ 71 was not the round he needed to stay alive in the FedEx Cup chase. He too, will not be playing the weekend.

“At 18, I’m pretty mad at myself for leaving it short for starters, and then I think all the build up on the short one, I just lost my concentration. Furyk kind of made 59 obsolete anyway, didn’t he?”
–Lucas Glover