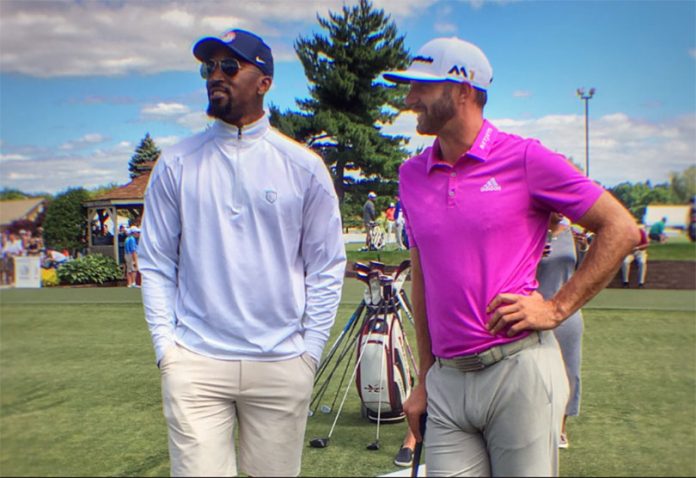 Today was the final practice round at Firestone CC in preparation for the $9.5M WGC-Bridgestone Invitational. It was also the first day that ticket holders were allowed to take in some of the pre-tournament festivities at Firestone.

The big news on social media was the appearance of NBA Champ JR Smith at the Akron golf course today. The Cleveland Cavs star baller was spotted on the range hanging out with DJ, among others.

The perks that go with bringing Cleveland its first championship since the Johnson administration.

When you're an @NBA champ like @cavs @TheRealJRSmith you get your own parking spot @WGC_Bridgestone. pic.twitter.com/fxFS8Sa1kj

The big man even took some swings, with DJ’s TaylorMades.

A ring comes with range privileges for JR Smith. pic.twitter.com/mix0wzg2Jt

Talking golf and basketball with the world champ @TheRealJRSmith! pic.twitter.com/5BkfM6450u

And this was not some publicity stunt. JR is a serious golf addict.

Here he is with Bubba last year.

JR wasn’t the only one to make golf news today. Here are a few other things that made news today on social media.

From the NBA to the NFL. Super Bowl champion Jerome Bettis hung out with Justin Thomas.

Even as a Bengals fan, pretty sweet meeting and talking with The Bus this morning! He's a little bigger than me ? pic.twitter.com/YBC5eerwNi

Mentioning golf may be insulting to your poor co-workers. Or something. Political correctness is banana land.

UNC faculty: Don't ask your co-workers to play a round of golf with you! https://t.co/VcCPbQim8B pic.twitter.com/jDK7Q6RV34

Another one bites the dust. And the first woman.

The first female golfer has dropped out of the Olympics due to Zika: https://t.co/nIQ9twBBvX pic.twitter.com/TF5Fax9KFW

He's in. @bubbawatson reaffirmed his commitment to play for #TeamUSA in the Rio Olympics: https://t.co/eefoFUFnqY pic.twitter.com/5hgxqKsiVY

USGA comes clean. Sort of.
“We know we have a problem with the rule. It is absolutely being looked at—we’ve been talking about this for months. It’s better than it was, but it’s not fixed.”
Here’s an audio of the USGA’s Mike Davis. Who basically says he had nothing to do with anything.

The Solheim Cup supposedly team visited Washington. I ask why?

Rory with some passive aggressive threats to Shane Lowry?

What’s a roundup without some good stuff from Nat?

#workoutwednesday #swimming this has been a new workout for me on the road this year. 45min pic.twitter.com/MBWluj1soI

Some neat behind the scenes photos of Phil today in the Callaway truck.

More buzz from the Odyssey X-Act Tank Chipper, coolest club on the market. At least this week.

A #chipper you can't ignore if you want to get up & down around the green. Check out our in-hand review!https://t.co/yFKEDQGUfQ

A tour of the MASSive Titleist headquarters.

MASS Production: Behind the scenes at the Fairhaven headquarters of @Titleist https://t.co/lRiXDneXIL pic.twitter.com/B6m6EE25A5

That’s a wrap. ‘Til tomorrow.

Omg, @LobsterLouiesTk … could eat about 10 of these. So good. pic.twitter.com/PZJRZWNa7F