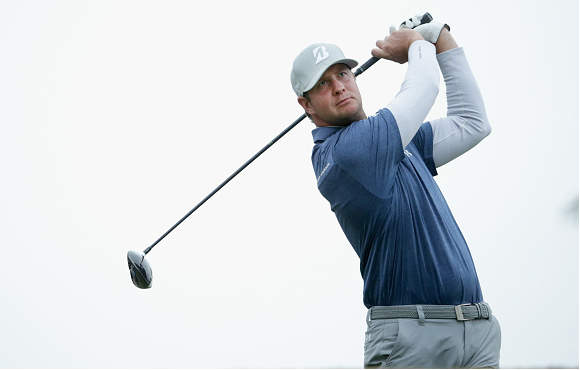 Among a field with 156 PGA Tour professionals, Hudson Swafford had the second-best score in round one, and the third best-score in round two. Considering those two things, most would think he was running away with the CareerBuilder Challenge in La Quinta, California, but his lead is actually a slim one.

After a second-consecutive 65, this one at the Nicklaus Course one day after playing La Quinta Country Club, Swafford is at -14 and leads by one over fellow American and first round leader Dominic Bozzelli, and New Zealand’s Danny Lee.

On America’s inauguration day, it is fitting that Lee is the only non-American in the top-5, with Californian Brendan Steele and Georgian Brian Harman two back of Swafford at -12.

Phil Mickelson, the man who most eyes are on this week, backed up his solid first round 68 in his first tournament back after two offseason hernia surgeries with an even better six-under 66, and sits at T6 – just four-strokes behind Swafford.

A great benefit to playing the CareerBuilder Challenge is that with the field alternating among three courses over the first three days, the cut that usually comes after Friday will not take place until after the third round.

Hudson Swafford has found a good formula for early-tournment (or any part of any tournament) success: he leads the field in both birdies and greens in regulation (GIR).

Swafford had one fewer birdie (7) than he did in round one (8), but was bogey-free in round 2 to post the same score.

The one bogey through 36 holes is the second fewest in the field (Bozzelli is the only bogey-free player). He hit an impressive 16 of 18 greens in regulation at the Nicklaus Course, putting him at 86% through two rounds.

Phil Mickelson, playing in his first tournament since October and just his second since the Ryder Cup, is playing exceptionally well for someone who did not know for sure that he would be able to play until Thursday morning.

Mickelson eagled his second hole of the day, the par-5 11th, lost some momentum with two bogeys late in his front nine, but was spectacular on the back, shooting bogey-free four-under 32 to post the 66.

Mickelson has been short off the tees, and not exceptionally accurate, but as often happens, his short game carried him.

Derek Fathauer has developed a strange habit of playing great in round 2 after nightmare round ones.

Last week at the Sony Open, he was in last place after a first round six-over 76, but shot a bogey free five-under 65 in round 2 (he still missed the cut).

So far, this week is looking like a replay of last week for Fathauer. In the first round at La Quinta, he was dreadful once again, as two double bogeys and a triple led to a five-over 77.

However, in round two he once again avoided bad holes, carding six birdies and posting a 4-under 68.

At +1, he is well out of contention and needs a good effort on Saturday just to make the cut, but his resiliency as of late has been impressive.

Defending Champion Jason Dufner underwhelmed in round one with a 1-under 71. However, he was one of the best on the course in the second round, with birdies on four of his final five holes to shoot a 6-under 66 and vault all the way up to a tie for 21st.

Spanish wunderkind Jon Rahm matched Dufner’s first two rounds, with a 1-under 72 in round one and a six-under 66 in round two.

Patton Kizzire was just one back of the lead after a 7-under 65 in round 1, but was thoroughly unimpressive on Friday, with an ordinary 1-under 71 which included just two birdies.

Jhonattan Vegas, who was tied for second place with Kizzire after day one, fell hard in round two.

Vegas, whose career has been largely marred by inconsistency was 10 strokes worse in his second round as four bogeys and an inexcusable 8 on a par 5 led to a 3-over 75. He is now ten strokes out of Swafford’s lead, in a tie for 49th.

“Very solid. Very patient, a lot of quality iron shots, a lot of good putts went in, some lipped out, but it’s just the nature of the game. I gave myself a lot of chances.”
–Hudson Swafford, Round 2 leader