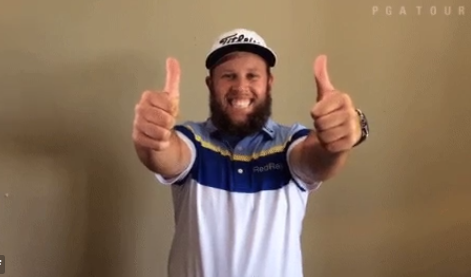 Action Video of the Day

The LPGA’s Natalie Gulbis went whale-watching yesterday, and captured a great video of the dolphins coming to life.

The European Tour posted this amazing video of The Dutch, the site of this week’s KLM Open.

What More Can You Do?

Bernhard Langer, the 59-year-old who has been tearing up the Champions Tour this year with four victories, 13 top 10s in 16 events, and an enormous lead in the Schwab Cup Standings. At last weekend’s Shaw Charity Classic, Langer’s three rounds were as follows: 65, 65, 64. That final round 64 included five birdies and an eagle.

Typically, those scores would have led to another Langer rout, but in this tournament, it was only good for T2. That is because Paraguayan Carlos Franco, who was 60th in the Schwab Cup Standings going into the week somehow went lower: 66, 63, 63 to nip Langer by two strokes.

Ageless Wonder: Stat of the Day

Speaking of the Shaw Charity Classic, 67-year-old Tom Watson was in the field. His T26 finish included a first round 65 and a final round 67, shooting his age (or better) twice.

Despite being of a more advanced age than the rest of the Champions Tour, Watson has made the cut in all seven events he has played this year, earning $146,808.

Caroline Masson, who won the LPGA’s Manulife Classic this past weekend, received a special celebration cake in addition to her earnings for the event.

It was the German’s first LPGA Tour victory. She finished two strokes ahead of LPGA notables Lydia Ko and Ariya Jutanugarn.

Florida State exploded in the second half, and finished with a 45-34 comeback victory.

Daniel Berger saw it coming though:

Strong second half coming, I'm feeling it even if no one else is #NoleNation

European Ryder Cup member Chris Wood had some custom wedges made up, with the Cup in mind.

Notables in the DAP Championship Field:

Stuart Appleby: The 9-time PGA Tour champion had a great comeback season in 2014, finishing 31st in the FedEx Cup Standings after several poor seasons. Appleby was not able to keep it going into 2015, making just three cuts in an injury shortened season (7 events total), and finished 143rd in this year’s FedEx Cup standings. Those past two seasons have necessitated a Web.com Finals appearance.

Andrew “Beef” Johnston: The European Tour Sensation has fans delighted that he is playing more in the States. Johnston finished eight at the Open Championship, and has a win and four top-10s in Europe this year.

He's fresh off a 3rd-place finish in Switzerland, and he's ready to take on the #WebTour Finals.

Bring on the Beef. pic.twitter.com/mGjQ9KJiKu

K.T. Kim: Major leaderboard watchers probably recognize his name, as he played in all four this year. He won three times this year in Japan, finishing second on their money list.

Camilo Villegas: The Venezuelan is among the more popular players on the PGA Tour, but has not played well recently. 2016 was easily his worst year on Tour earning just $450,056 in 27 events, with only two finishes in the top 25.

Trick Shot Video of the Day

The Bryan Bros are back! George slams one in from the top of Williams-Brice Stadium

It's good! George Bryan holes out from the top of Williams-Brice Stadium. #SCtop10

Question of the Day

Pat Perez is unhappy that a man is trying to qualify for an LPGA Tour event:

He then expanded further:

Also had a funny response to a fan question asking about it: