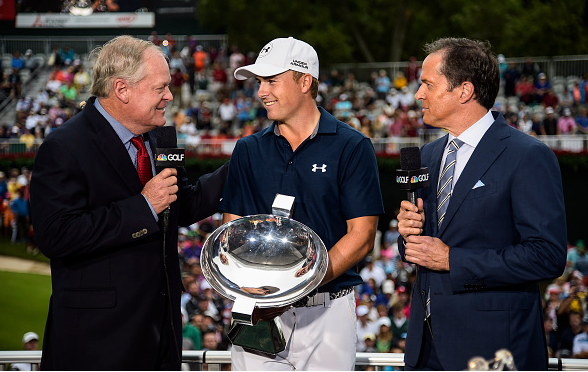 Eleven months of golf have culminated to this: The Tour Championship. Hosted by East Lake Golf Club in Atlanta, Georgia, the final round of the FedEx Cup playoffs features the 30 golfers who performed best during those 11 months, with the richest prize in professional sports in their sights.

That prize? The FedEx Cup, which comes with a check for a cool $10 million. Five of those 30 golfers: Dustin Johnson, Patrick Reed, Adam Scott, Jason Day, and Paul Casey automatically win the FedEx Cup with a win at East Lake. The other 25 need a win and some help, with some needing more help than others.

Simply getting here is an enormous accomplishment and opens up many exemptions, but nobody wants to settle for just being here. All 30 golfers are in it to win it.

The origins of the East Lake Golf Club can be traced back to 1904, when it was bought and established by the Atlanta Athletic Club. The club is most famous for being the home of Bobby Jones, who is believed to have played his first and last round there.

East Lake has never hosted a major, but once held the Ryder Cup (in 1963). It first hosted the Tour Championship in 1998 and has been its permanent home since 2004.

For this season, the Club will reverse the nines, so that the final hole will be a par-5. Its regular 18th hole is a par 3.

The defending Champion is Jordan Spieth. Going into the tournament, he was ranked second in the FedEx Cup Standings, behind only Jason Day, who was in the midst of a playoff tear. After three rounds, Spieth was one stroke ahead of 2013 FedEx Cup Champion Henrik Stenson.

Spieth shot a one-under 69 on Sunday to post at -9 for the tournament, while Stenson struggled to a two-over par 72 to finish T2 with Danny Lee and Justin Rose. With the win, Spieth not only won the $1.45 million purse for the Tour Championship, but also the $10 million prize for winning the FedEx Cup.

All 30 golfers in the field can mathematically win the FedEx Cup, but only the top five are guaranteed the $10 million prize if they win the Tour Championship. Those players are as follows:

The nine-year Tour vet is having his best PGA season in 2016. He broke through for his first major victory at the U.S. Open after many years of agonizingly close calls. With three victories (the U.S. Open, the WGC-Bridgestone, and the BMW Championship) on the season, all at big-ticket events, Johnson will likely be the landslide choice for Player of the Year.

The only other player who can really even get in the conversation is Jason Day, if he wins convincingly at East Lake (Day would have four victories to DJ’s three, but no majors). With over $9 million in earnings this season, DJ stands a chance to break $20 million on the year. He has 14 top 10s in 21 events, and only one missed cut. He leads the Tour in driving distance, scoring average, and birdie average.

Reed has been consistently great all season. Going into the playoffs, he was among the Tour leaders in top-10 finishes with nine, including two runner-ups. He has stepped up his game further in the playoffs, winning The Barclays, finishing T5 at The Deutsche Bank, and T13 at the BMW Championship.

That playoff tear moved him to #2 in the standings, a good sign for his chances when you consider that the past three FedEx Cup Champions (Spieth, Horschel, Stenson) were all at #2 going into the Tour Championship.

Scott got his PGA season off to an absolutely torrid start with two wins and two runner-ups in his first six events. He had been relatively quiet since April, with only one top 10 finish from April to July.

Since the playoffs have started, however, Scott’s game has come back around. He has finished in fourth place in all three playoff events.

Day, the world’s #1 ranked golfer, was #1 in the standings after the regular season. He has three victories on the year: the Arnold Palmer Classic, the WGC-Match Play, and The Players Championship, all tournaments with elite fields.

Since that Players triumph in early June, Day has not won, but he did add four top-8 finishes and finished runner-up to Jimmy Walker at the PGA Championship. Day tied for 4th at The Barclays and finished T15 at the Deutsche Bank before withdrawing after three rounds at The BMW, citing a back injury. He is expected to be good to go in Atlanta.

Most of Casey’s 2016 PGA season has not been special, but he has Billy Horscheled the playoffs, finishing solo second at the last two playoff events. At the Deutsche Bank Classic, a disappointing final round 73 allowed Rory McIlroy to take the win from six strokes back.

At the BMW, he applied considerable pressure on Dustin Johnson, the only one in the field to do so, but DJ was just too much down the stretch. Casey has easily the least impressive resume of the top five, but just like DJ, Reed, Scott, and Day, he wins the FedEx Cup automatically with a win at East Lake.

That makes 11 of the 12 spots on the team spoken for. The fourth and last captain’s pick will be made after the Tour Championship, which puts pressure on a number of players in the field.

Here are the players Love will most likely be looking closely at:

Bubba Watson: Bubba had been in the top 8 (which qualify automatically) of the Ryder Cup standings for nearly the entire 2016 season, but dropped to 9th late in the season, after several months of unimpressive performances.

He has not finished in the top 10 in a PGA tournament since early March (he was T8 at The Olympics), but he has been showing better form as of late. At #7 in the world, he is the highest ranked player in the world not currently on the team.

Daniel Berger: The reigning Tour Rookie of the Year would bring some youth to a team that already has plenty. Berger won the FedEx St. Jude Classic in early June, one of his six top 10 finishes this season.

Ryan Moore: If recent form is important to Love III, Moore will have a good chance of being the pick. Since mid-August, he has won the John Deere Classic, finished T7 at The Barclays, and T8 at the Deutsche Bank Championship.

Jim Furyk: Furyk missed three months of the season after wrist surgery, hurting his Ryder Cup standing. He tied for second at the U.S. Open and made international headlines when he shot a final round 58 at The Travelers Championship, the lowest round in PGA Tour history.

One thing working against Furyk is that he did not qualify for the Tour Championship, so he will need to hope that his current resume is enough. Furyk is an experienced Ryder Cupper, but his record has been poor.

Justin Thomas: Currently 12th in the FedEx Cup standings, Thomas has one win on the season, along with four T3’s including one at The Players. He took 10th at The Barclays, but missed the cut at the Deutsche Bank, and was T32 at the BMW.

Jordan Spieth, the defending champion of both the Tour Championship and the FedEx Cup, has a very up-and-down season. He has two victories on his season, but unfortunately, the biggest memory most have of Spieth’s season is the back nine collapse at the Masters, highlighted by a seven on the par-3 12th hole.

He has played well as of late, with top-15s in four of his last six tournaments. He is coming in off a 9th place finish at The BMW Championship. His past success makes him a huge threat at East Lake, but he has not quite reached the very high standard he set in 2015.

Rory McIlroy: The world #3 McIlroy won the Deutsche Bank Championship, bringing his first victory to his relatively disappointing 2016 season. He comes into the Tour Championship at #6 in the FedEx Cup standings, so a win wouldn’t necessarily clinch the FedEx Cup, but all he would need with a win is Dustin Johnson not finishing solo-second. He was T42 at the BMW.

Emiliano Grillo: At #9 in the FedEx Cup standings, the Tour rookie stands a decent chance of taking the FedEx Cup with a win at East Lake. His T2 at the Barclays rocketed him up the standings.

Jimmy Walker: Currently 10th in the FedEx Cup standings, Walker would need a win and the top five to stay out of the top 5. Regardless of how Walker performs in this tournament, after his breakthrough major victory at The PGA Championship, his season will be considered a success.

Phil Mickelson: Mickelson still has not won since his surprise triumph at the 2013 Open Championship, but his 2016 season has been one of the best ever for a player in his mid 40s (Mickelson is 46). His season will be remembered most for his unbelievable performance in losing a Sunday duel to Henrik Stenson at Royal Troon. At #13 in the FedEx Cup standings, Mickelson needs a win and a lot of help.