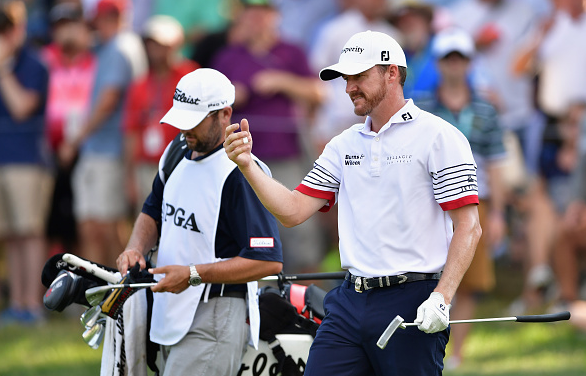 A nasty storm front swept through New Jersey last night, soaking Baltusrol Golf Club, the site of the 2016 PGA Championship. Coming in behind that storm was a sea of red numbers, as players took advantage of softer conditions.

An astounding 46 golfers out of the field of 156 finished at -1 or better, led by a duo of Americans: first-round leader Jimmy Walker and largely unknown Robert Streb, who became the latest member of the increasingly-less exclusive “63 in a major” club, at -9. They hold a two stroke lead over rookie Emiliano Grillo and world #1 Jason Day. Lurking three strokes back is the most dangerous competitor on tour: Open Champion Henrik Stenson.

Jimmy Walker, a five-time champion on tour, has never won a major, but holds at least a share of the lead for the second consecutive round. At 269.8 yards per drive, Walker’s tee shots have been considerably behind the field, but his short game has been nearly unstoppable. Walker remarked yesterday that he loves the big, rolling greens at Baltusrol, and that they remind him of the greens at the Texas course he grew up playing. He has looked extremely comfortable, with no blemishes on his scorecard until erroneously driving into the water on 18.

Robert Streb has struggled all season, with no finish higher than a T18, but that major championship-tying 63 leaves him in great shape going into the weekend. He birdied eight holes in round 2, to just one bogey, his only bogey of the entire tournament so far. Hitting 11 fairways, compared to the 5 he hit yesterday, was the big difference for him.

For the second day in a row, Phil Mickelson had to dig himself out of a big hole. His drive on the first hole landed in a residential neighborhood, and led to a triple-bogey 7. He recovered and finished at E for the day, +1 for the tournament. Patrick Reed, another player who would be a first-time major winner, shot a 5-under 65, five strokes better than he did in round 1. Billy Hurley III, whose win at Congressional last month might have been the feel-good story of the year, matched Reed with a 65 of his own. After a round 1 72, Hurley was in danger of missing the cut. Now, he’s at -2 (T13) and in contention.

In one of the most puzzling developments of the season, previously red-hot Dustin Johnson, who had finished in the top 10 in eight of his last ten, and won both the U.S. Open and WGC Bridgestone, fell even further back today, shooting a 2-over 72 and dropping all the way to +9, good for a tie for 142nd place. Two birdies over two days will be among the things keeping him from playing the weekend. Ross Fisher, who contended at the 2009 U.S. Open, and James Hahn, who won earlier this year at Quail Hollow, struggled to matching rounds of +3, after great round 1s. Both made the cut, but are much further back than they were after yesterday.

Jason Day put together one of the best stretches of golf from anyone all season, when he birdied seven of eight holes, mid-round. The tear came right after a double-bogey on 7. Day shot a 65 and is two strokes out of the lead.

Rory McIlroy officially will not be a 2016 major winner, as a one-under round of 69 was not enough to offset his birdie-free round of 74 yesterday. At +3, he missed the cut for the second time in a major this year. Strangely, he led the field in shots gained: off-the-tee, and hit 11 of 14 fairways in round 2. His putting, however, was an embarrassment. He ranked a dreadful 151 out of 156 players in strokes gained: putting. He spent significant time after his round yesterday on putting practice, but it did not lead to better results.

“Just kind of tweaked my swing a little bit, and I don’t know a better way to put this, but it kind of feels like my golf swing again. May not hit it perfect or anything, but it kind of feels normal again. I don’t feel like I’m trying to do everything I can to hit it straight. I can just kind of take a swing at it and catch it solid for the most part.” ~ co-leader Robert Streb on what has been the difference for him through two rounds.