During the second round of the Memorial Tournament, Jon Rahm made the turn on 1 under and then proceeded to shank his second shot on the par-4 second hole (his 11th).

The Spaniard saved a bogey on his way to a 2-under 70.

“Absolutely. Absolutely. Ball below my feet, uncomfortable shot, wind. And tried to drive it in low and didn’t clear at all. Full of indecision. It was a recipe for disaster. Could have been either green-side bunker or short, and ended up being worse,” said Rahm.

“I did get lucky with what happened. I was able to save a bogey, which was minimizing the mistake. I thought it was going out of bounds, and I was staring at a 7.”

Justin Thomas, who famously hit a shank during Sunday’s final round of the PGA Championship, en route to a second career major, welcomed Rahm to the shank club.

JT even replied to the PGA Tour’s IG post, saying: “Ya dang right is does.” 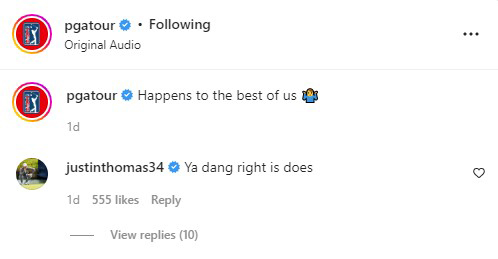