In this post we’ll keep track of the 2018 Kia Classic for the first three rounds of play in a quick-hit format (who leads, who’s in hunt, quotes, and stats). Following Sunday’s final round at Aviara Golf Course, we’ll produce a full recap with story, quotes, final stats and how the tournament played out, round by round.

TRIO ON TOP AFTER 54 HOLES

American Lizette Salas sits in a tie with Korean players Eun-Hee Ji and In-Kyung Kim at 11-under par through 54 holes at the Kia Classic.

Kim has seven career LPGA victories and is fresh off of a Tour-leading three wins in 2017.

Cristie Kerr’s five-shot advantage over the field through two rounds began to dwindle early on Saturday and was ultimately overcome – Kerr, who shot a 3-over 75 in the third round, sits in a tie for fourth at 10-under par alongside compatriot Cindy Lacrosse, Sweden’s Caroline Hedwall and Hsu.

Eun-Hee Ji, Republic of Korea (70-68-67, -11)
“I was working on my putting because I haven’t felt good last week and before. The rough is really hard out there, so I tried to keep it in the fairway and try to keep it on the green. So I really focused on that.”

Lizette Salas, United States (69-67-69, -11)
“I’ve had some good history here, but at the same time this is a whole new year, whole new scenario. I’ve been working extremely hard during the off-season. I have the best team I could ask for. I just have to play as confident as I can. I’m striking it well. Just got to minimize my mistakes.”

Cristie Kerr, United States (67-64-75, -10)
“Mentally just wasn’t quite as sharp; swing wasn’t quite as sharp. I mean, every putt I hit like bounced horribly. Like a lot of putts didn’t have a chance to go in the hole. I don’t know why it was different today on the greens.”

Cristie Kerr posted a second-day 8-under 64 to set the 36-hole tournament scoring record (131, -13) at the Kia Classic. Kerr’s 131 topped the previous mark by three shots.

Kerr’s 64 was her lowest round this season and her lowest ever in this event, one stroke better than the 65 she closed with to win in 2015.

Sitting T2 at 8-under par is the foursome of In-Kyung Kim and Hee Young Park of the Republic of Korea, Sweden’s Caroline Hedwall and American Lizette Salas.

In-Kyung Kim, Republic of Korea (67-69, -8)
“I made couple birdie on par-5 so I was very happy. Well, I think maybe I wasn’t best today on the fairways and things like that, but I think I managed well with what I had today.”

Lizette Salas, United States (69-67, -8)
“Very pleased. Made some changes early in the week with my swing coach, and just really — I really like this golf course. I really like the environment. My family gets to come out. So much confidence at the beginning of the week, and definitely showed the first two days. Just got to keep doing the same thing.”

Hee Young Park, Republic of Korea (66-70, -8)
“I’m going to do the same, repeat it, and like do some pre-practice a little bit with the putting and distance stuff. And then I’m going to (put my) feet up and drink some like IPAs. Here in San Diego, so drink some cool local beer and like preparing (for the( weekend.”

KIA CLASSIC ROUND ONE

TRIO TIED AFTER DAY ONE

Caroline Hedwall, Hee Young Park, and Jackie Stoelting opened with matching 6-under 66s at Aviara Golf Course and share the lead after day one of the 2018 Kia Classic. Hedwall and Stoelting are looking for their first LPGA wins, while Park is a two-time winner. 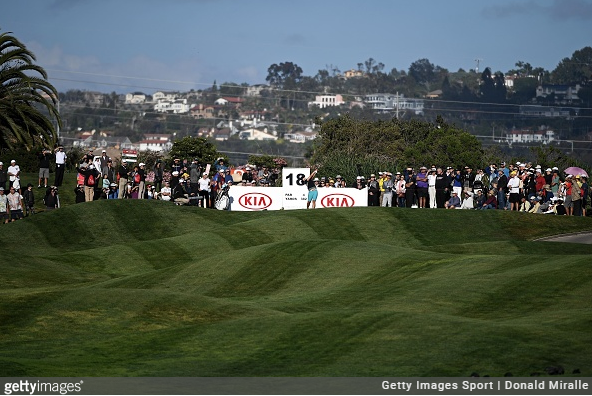 Caroline Hedwall, Sweden (66, -6)
“Now I feel like my game is really solid. It’s just my putting that I’ve actually been struggling with the past couple years. It’s just all about trust and having self-confidence. I feel like I’ve gained that now. I had good practice sessions the last couple days, and it’s starting to pay off. That’s really nice.”

Jackie Stoelting, United States (66, -6)
“Must just suit my game. I hit a lot of fairways. I don’t necessarily hit if far, but keeping is in the fairway is super key this week.”

Hee Young Park, Republic of Korea (66, -6)
“I been practice a lot of like short putting. Like last week and even this week I got a lot of confidence inside like six foot putts, so I made a lot of also inside six foot putt. I don’t think I missed a short putt today. That makes me like a lot more comfortable, so easier to play the round today.”

Cristie Kerr, United States (67, -5)
“I like this golf course. I think it’s a tough golf course and you can’t fall asleep on any shot. I mean, it’s just a really great course. The layout. The rough is high. You got to pay attention. I think that’s maybe why I play a little better here than some other places.”

Ariya Jutanugarn, Thailand (67, -5)
“Well, I mean, it’s raining today and a little bit windy, but my irons helped me out a lot. I’ve been hitting it pretty good today.”

Nicole Broch Larsen, Denmark (67, -5)
“You definitely got to be patient. Like it’s four rounds and everything can happen. Even though you only make the cut, still two rounds to go. Everybody out here is so good, so it’s not far from just making the cut to the leaders in a normal week. Just got to be patient.”