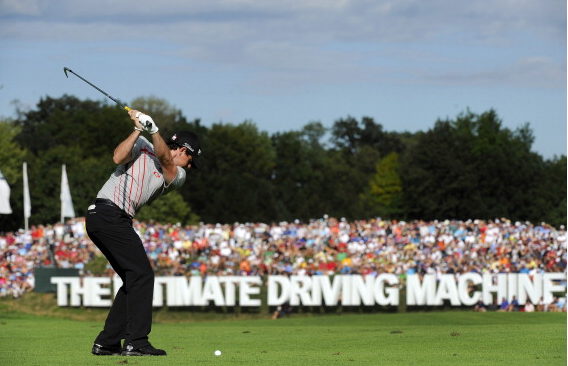 The BMW Championship makes its second visit to the Crooked Stick Golf Club, just outside of Carmel Indiana. One of Pete Dye’s early designs, this championship venue is where John Daly was introduced to the world, with his three-stroke victory at the 1991 PGA Championship.

Second, no consecutive holes are alike: One hole may be long Par-3 and the next a short Par-4. One hole may require a right-to-left tee shot and the next a left-to-right. It’s a course where the player will have to think, and strategize accordingly.

Crooked Stick hosted the BMW Championship in 2012, where Rory McIlroy took advantage of soft conditions and drove himself to the podium. McIlroy might just be feeling a sense of déjà vu, considering that the last time he came here, he was coming off of a win at the Deutsche Bank Championship.

In 2012, Hurricane Isaac wrecked the course and left players shooting darts. McIlroy ranked 45th in Strokes Gained: Putting, but still shot 20-under for the week, with two eagles and 23 birdies.

The weather this year will most certainly bring back memories from 2012. The Indianapolis area has already received a lot of rain the last few weeks, with the forecast for the first three rounds predict rain and thunderstorms. If might just turn out to be a birdie fest once again.

1. Strokes Gained: Off the Tee

Crooked Stick will play over 7500 yards for the BMW Championship. With the weather forecast in mind, it will be extremely crucial for the players to hit it long off the tee. The long hitters are at an advantage here.
Top Players this Week: Rory McIlroy, Dustin Johnson and Bubba Watson.

Another key to doing well this week will be hitting a bunch of greens, and rolling in those birdie and eagle putts. This is not a course where conservative play helps. The winning score is likely to be close to what it was last time (-20), and with that in mind, the winner will need to be making plenty of birdies, and not settling for pars.
Top Players this Week: Rory McIlroy, Dustin Johnson and Jason Day.

Like McIlroy in 2012, the winner in probability will rank in the Top-5 in Proximity to the Hole. It’s all about getting close and giving yourself plenty of birdie opportunities.
Top Players this Week: Dustin Johnson, David Hearn and Vaugh Taylor.

Overall Pick: Dustin Johnson is the clear player who excels in all three of these stats.