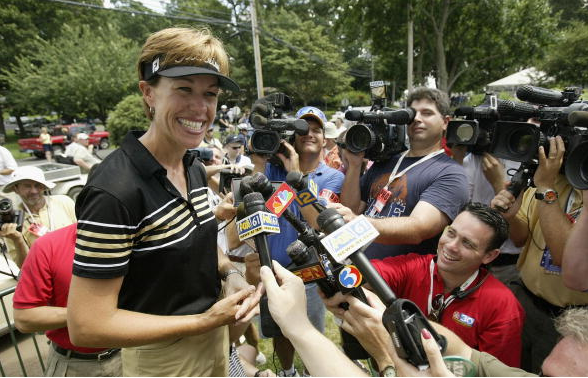 With the final major of the season behind us, the PGA Tour moves to the Travelers Championship. The annual Connecticut event is one of the longest running events on tour.

Here are 7 interesting facts you should know about the Travelers Championship.

There have seven multiple-time winners of the Travelers Championship, but Phil Mickelson remains the only back-to-back winner of the event. In 2001, Mickelson shot a third round 61(-9) which gave him a one stroke lead over David Berganio. He shot a 68 (-2) in the final round to win by a single stroke. In 2002, Mickelson started the final round five shots behind leader Jonathan Kaye, but shot a 6-under 64 to win by one stroke.

2. Lowest Round by an Amateur

Charlie Sifford’s first win on the PGA Tour came in this event in 1967, back when it was called the Greater Hartford Open. Sifford shot a final round 64 (-7) to win by a stroke over Steve Oppermann. He earned $20,000 for his victory.

Suzy Whaley won the Connecticut PGA sectional in 2002 which got her an entry into this event which was called the Greater Hartford Open back then. The controversy lay with the fact that when she won the PGA sectionals she played from the front ladies tees, which were 600 yards shorter than the men’s tee. Call it the “Whaley Rule,” the PGA announced in January 2003 that women will have to play from the same tees as men to qualify for PGA Tour events. Whaley did play the 2003 Greater Hartford Open and shot rounds of 75 – 78 to miss the cut. But this allowed her to become the first woman in 58 years to qualify for the PGA Tour since Baba Zaharias did in 1945.

Back in 2014, Kevin Streelman set a new PGA Tour record for most birdies in a row at the end of a tournament to win. He made seven consecutive birdies over the final seven holes to win by one stroke. He broke Mike Souchak’s record of six straight birdies set in the 1965 St. Paul Open.

The practice round on Tuesday has a unique tradition at the Travelers when the players and caddies are given a chance to hit a floating umbrella. This hole is known as “The Umbrella at 15 1/2,” which is located between Holes 15 and 16. The players and caddies get one shot to get it in the hole or hit it close to the pin on the umbrella, with the winner receiving $10,000 to a charity of their choice.

Like most PGA Tour events, the Travelers Championship has gone through its fair share of sponsor and name changes. Legendary entertainer, Sammy Davis Jr., was a yearly feature at the Pro-Ams. In 1973, the name of the event was changed to Sammy Davis Jr. Greater Hartford Open. In 1985, Canon came on board and the name was once again changed to Canon Sammy Davis Jr. Greater Hartford Open. The association with Sammy Davis Jr. ended in 1988. Davis’ status brought a lot of attention to the event and helped bring a lot of celebrities to the Pro-Am, which included, Bob Hope, Mickey Rooney, Jerry Lewis and Jackie Gleason.