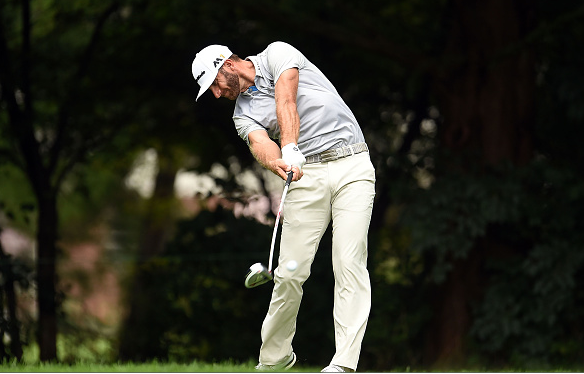 Dustin Johnson fired a 9-under par 63 during round two of the BMW Championship and heads into Saturday’s third round tied for the lead at 14-under with Roberto Castro, who carded his second consecutive 7-under 65. The two will be paired together in the final group on Saturday.

Paul Casey, who finished second to Rory McIlroy in Boston at the Deutsche Bank Championship, continued his hot play at Crooked Stick, and is all alone in 3rd place at 11-under par. J.B. Holmes and Chris Kirk, tied for 4th place, round out the top five at 10-under par.

Off the tee, DJ was a little shaky, but made up for it with lights-out putting, landing 3rd in SG: Putting, and first in Putts Per GIR. Johnson took big time advantage of the par 5s, carding two eagles and a birdie.

Castro had eight birdies in round one, and followed it up with seven in round two, while avoiding any big numbers (11 pars). Like yesterday, Castro finished near the top of almost every strokes gained statistic, and even his driving distance has been impressive through two rounds (300.0 yards), good for 39th in the field.

DJ’s FedEx Cup position (#3) gives him a guaranteed spot in the TOUR Championship, even if he were to close with a couple of rounds in the 90s. But Castro entered the BMW in 53rd place and needs to finish no lower than 3rd place to move onto East Lake.

Being down to what is arguably the best 69 players on the PGA Tour, it’s hard to find a sleeper in the field. But J.B. Holmes, who came into the BMW not exactly red hot over his last five starts (T33 Deustche, T41 Barclays, CUT Wyndham, CUT Travelers, CUT PGA), seems to have shaken his slump.

Holmes is hitting them long off the tee and playing solid from the fairway in (T14 GIR, 12 PUTTS PER GIR). If Holmes were to win at Crooked Stick, he’d almost be guaranteed a ticket to Hazeltine. So the incentive is clearly there for Holmes over the next two rounds.

Ryan Moore was the hottest player of about ten being considered for a Ryder Cup spot coming into this event. Over his past four tournaments, Moore has a T8 at the Deutsche, T7 at The Barclays, a win at the Deere, and a T17 at Wyndhham.

Currently rated at number 8 in the Ryder Cup standings of those who hadn’t qualified, a strong showing here would have made it extremely hard for Captain Love to keep him off the team. But two rounds of 73 and 74 won’t help his cause.

Rickie Fowler is making it really hard for Love to justify him as a captain’s pick, despite being ranked #9 in the world. Starting with the PLAYERS, back in mid May, over 10 PGA Tour events, Fowler has more Missed Cuts (3) than Top 10s (2). He followed up his 3-over in round one, with a 1-under today, leaving him at 2-over par and T63. This is not going to get it done.

“Good start to the tournament. But they don’t give any trophies out after 36 holes.. Lot of golf left. But very pleased.”
–Roberto Castro on his two rounds of 65.