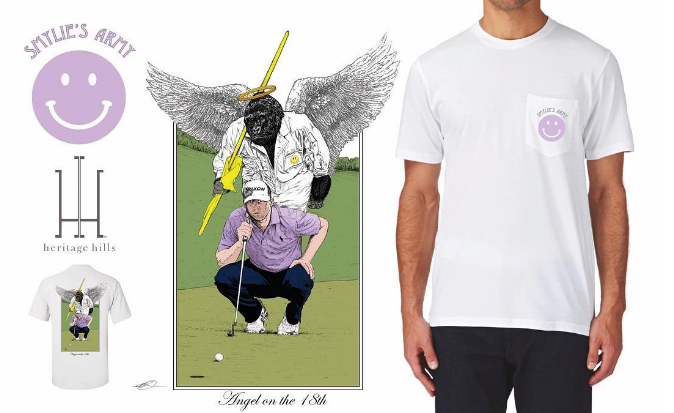 The new “Smylie’s Army” t-shirt depicts the slain gorilla and Kaufman’s caddy as the two both look over a putt.

*ATTENTION: New Smylie's army t-shirts featuring the one and only Harambe* Go hit the link in my bio to purchase or check out @Smyliesarmy on Twitter for more info on how to purchase the t-shirt. Thanks to @heritagehillsco and @savagedorn for the help on the design. #smyliesarmy #ripharambe

This isn’t the first time Kaufman has paid homage to the famous gorilla from the Cincinnati Zoo. After the 17-year-old primate was killed by zoo workers in an attempt to save a 3-year old that climbed in his cage, Kaufman had a ‘RIP Harambe’ stamped on his 58-degree wedge.

The masterful artwork, by Heritage Hills and designer Stewart Dorn, has the caption “Angel on the 18th” under a picture of Kaufman and Harambe lining up a putt. Judging by the recognizable caddy outfit (white jumpsuit), it’s safe to say the drawing is of the two at the Masters.

Only limited quantities of the shirt are available for purchase so get yours today if you want to honor Harambe.

Who Wore It Better: Jimmy or Smylie?