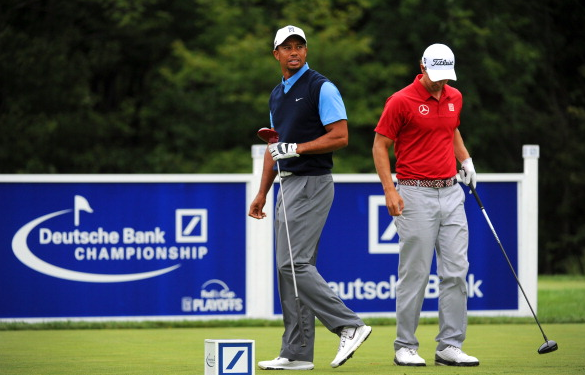 The Deutsche Bank Championship, the second event of the FedEx Cup Playoffs, made its debut on the PGA Tour in 2003 and has been played every year at the Tournament Players Club of Boston in Norton, Massachusetts.

TPC Boston is by far the easiest course of the 2016 playoffs and will provide all kinds of of birdie opportunities for some of the best golfers in the world.

Before we begin our coverage for this week’s playoff event, here are 8 DB Championship records to know.

Three players hold the record for the lowest winning score at the Deutsche Bank Championship. Vijay Singh in 2008, Charley Hoffman in 2010 and Henrik Stenson in 2013, all shot 262, 22-under par.

In 2010, Charley Hoffman shot a memorable final-round 62(-9) to win by five strokes over Jason Day, Luke Donald and Geoff Ogilvy. Hoffman holds the record for the lowest final round score shot by the winner.

Charley Hoffman actually set another record in 2010. Having started the final round four stroke behind leader Jason Day, Hoffman staged the best come from behind victory at this event.

The largest margin of victory at Deutsche Bank Championship is five strokes, and the record is held by two players. Vijay Singh in 2008 and Charley Hoffman in 2010, both won with five stroke margins.

Vijay Singh is the only two-time winner at the Deutsche Bank Championship. His wins came in 2004 and in 2008.

Tiger Woods has the lowest scoring average at the Deutsche Bank Championship. He’s played this event a total of nine times and has made the cut on each occasion. He is a combined 101-under par through his 36 rounds at TPC Boston and has a stroke average of 68.19.

With two wins, Vijay Singh is the career money leader at the Deutsche Bank Championship. Steve Stricker and Tiger Woods are the only other players to earn over $3M in Boston. Henrik Stenson and Adam Scott round out the Top 5.