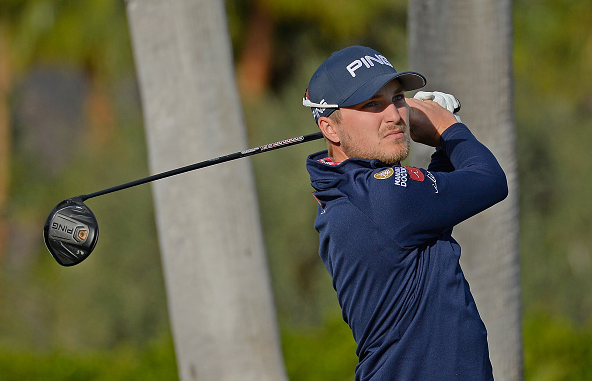 Austin Cook fired an 8-under 64 on Saturday at La Quinta Country Club and will take a one-stroke lead into the final round of the CareerBuilder Challenge. 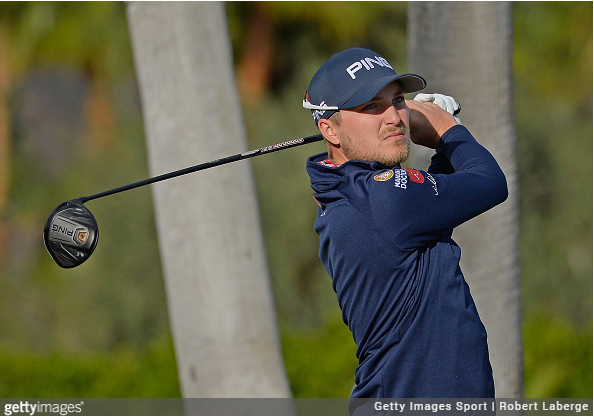 Cook, who secured his maiden title just two months ago at the RSM Classic, started the day with three-straight pars, but a birdie on No. 4 opened the floodgates for the 26-year old rookie, resulting in a six-hole stretch of four birdies and an eagle to turn at 30.

After a bogey on the 10th, the Arkansas native cruised home with three more birdies to reach 19 under, and the low 54-hole score.

“Missed a few putts early, but starting on my fourth hole I was able to make a birdie and kind of get the ball rolling and it never really stopped rolling,” said Cook, who needed just 22 putts on Saturday, a career best.

“Kip and I were doing really good at seeing the line on the greens today. I think that was one thing we had issues with yesterday is we weren’t gelling very good on the reads and today we were and we were able to hit the ball right where we were looking and just had a great round.”

Andrew Landry, the 36-hole leader, posted his third-straight bogey-free round – this one a 2-under 70 at the Stadium Course – to sit T2, alongside Martin Piller at 18 under.

“I’ve been putting well all week and my speed’s been incredible, except for that last putt there, I was really wanting to get in that final group with Cookie, so we’ll see how it goes and we’ll play good tomorrow,” said Landry, the only player in the field without a bogey.

After opening with a 64, Piller has posted two-consecutive rounds of 67 and will join fellow Web.com Tour grads, Cook and Landry, in Sunday’s final group.

World No. 3 Jon Rahm, and Scott Piercy, both of whom played the Stadium Course, are tied for fourth at 17 under.

Rahm, the first-round leader, carded six birdies and four bogeys en route to a 2-under 70, while Piercy went four shots lower, signing for a 6-under 66.

Three birdies over his last four holes moved Adam Hadwin into a tie for sixth, alongside Grayson Murray (67) and Brandon Harkins (68).

Zach Johnson entered the day T4, but after a third-round 73 at the Stadium Course, he will enter the final round seven back at T21.

Palm Desert High School senior Charlie Reiter, 18, started the day at 6 under and seemed to be a safe bet to make the cut, but a final-round 5-over 77 ended his tournament.

“My grip on my putter. I just kind of went back to what I used to have, which is a lot more my hands are more connected instead of apart on the putter. It started clicking, I started making putts and it hasn’t stopped, I’ve been able to continue good putting and good ball striking and just all around my game has improved a lot in the last year and a half.”
– Austin Cook