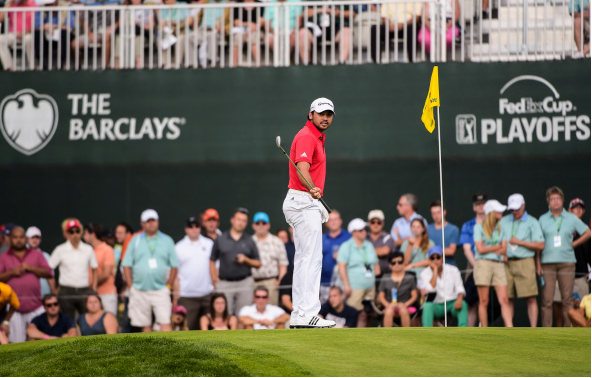 The regular season has come and gone, with playoff positions set and the Olympics in the rear-view mirror. Now comes the finishing stretch: the thrilling and prolific FedEx Cup Playoffs. The 125 best golfers on the PGA this season will battle sadistic course setups and high-pressure elements over a four-week gauntlet for the richest prize in professional sports: 10 million dollars.

The first round of the playoffs congregates this week on Long Island, at the famously difficult Bethpage Black Golf Course. This will be Bethpage’s fourth time hosting a PGA event, having hosted the U.S. Open in 2002 and 2009, and the 2012 Barclays.

The FedEx Cup playoffs are not like the NCAA basketball tournament or tennis majors where the lower seeds have no chance of winning. FedEx Cup points are quadrupled for the playoffs, so literally anyone in the field can win. In 2009, Heath Slocum went into the Barclays ranked 124th, and left ranked third. That gives hope to players like Shawn Stefani and Seung Yul-Noh, who snuck into the playoffs by the skin of their teeth.

Long-known as “The Westchester”, the tournament that is now The Barclays began in 1967. From 1967 to 2007, the event was held at Westchester Country Club in Rye, New York. It was assimilated into the FedEx Cup playoffs in 2007, with Steve Stricker capturing the title. Over the past decade, the tournament has rotated locations, always among elite courses in the New York City area.

Many greats have played The Barclays, with Vijay Singh’s four victories making him the most decorated winner. Jack Nicklaus, Seve Ballesteros, Ernie Els, and Sergio Garcia are the only others to win more than once, with two victories apiece. This tournament is also notable for being one of the few regular events that Tiger Woods has never won.

An A.W. Tillinghast design, 2016 edition tournament host Bethpage Black is known as one of the most difficult courses in the U.S. The course features an iconic sign positing, “The Black Course is an Extremely Difficult Course Which We Recommend Only For Highly Skilled Golfers”.

In the three tournaments it has hosted, only one player has posted a score of better than -7, that being Nick Watney’s -10 winning score at the 2012 Barclays.

The defending champion is Jason Day. Day caught fire over the weekend at Plainfield Country Club, posting incredible scores of 63 in round 3 and 62 in round 4, the second-lowest score for the final two rounds in PGA History (Stuart Appleby went 65-59 at the 2010 Greenbrier).

It was Day’s third win in a span of just four events, propelling him to the top of the FedEx Cup points list. Day won by six strokes over Henrik Stenson, and eight over Bubba Watson.

The Barclays is a big enough tournament on its own, but it is also just the first of a four-week playoff slate. It will not be four weeks for everyone, however. After each of the four tournaments, a set number of golfers will be eliminated.

For The Barclays, only the top 100 of the 125 will pass on to the next round (The Deutsche Bank Championship). FedEx Cup points are not reset, meaning everyone goes into The Barclays with the points they had going in. That gives those higher up a clear advantage, but with the points quadrupled for the playoffs, golfers can move up the standings in a hurry, although since the inception of the playoffs in 2007, only one golfer has won the $10 million prize starting outside the top 20 (Billy Horschel was 69th going into the 2014 playoffs).

Four players are sitting out The Barclays. Among those players, Sergio Garcia (20th) ranks the highest, and is guaranteed to make round 2. Danny Willett (75th) is a near lock to still make the second round, although he is not planning to play next week either. Shane Lowry (87th) could be close, but is more likely than not to advance. Anirban Lahiri (117th) will not move on to the Deutsche Bank Championship.

The Barclays is critical for those on the American Ryder Cup bubble, as it is the last opportunity to qualify automatically by finishing in the top 8 of the points list.

This is how that bubble currently looks:

Those who do not finish in that top 8, will need to hope that they will be one of Davis Love III’s four “Captain’s picks”. Piercy and Haas are highly unlikely to qualify if they do not get there automatically. Players like J.B. Holmes and Rickie Fowler, who have not had great form as of late, are also vulnerable if they do not finish in the top 8.

Jim Furyk has been red hot recently, fueling speculation that he could be a prime candidate to be chosen by Love.

Jason Day, the world’s #1 ranked golfer, was unstoppable in this tournament last year, blazing his way to a six-stroke victory. At one time, that win was one of seven victories in an unthinkable 17 tournament span.

Day, who is also #1 in the FedEx Cup standings, has cooled off that unsustainable pace; he has not won since his Players victory in mid-May, but with a solo-second place finish at the PGA Championship, he is showing signs of rounding back into form, which should be scary for the rest of the field. He has been far and away the best putter on tour this year, and statistically, has been between well above-average and elite in everything.

Day’s biggest competition for The Barclays, and the FedEx Cup crown is likely #2 Dustin Johnson, who has two recent wins (U.S. Open and WGC-Bridgestone) in tournaments with elite fields, and has finished in the top 10 in 12 of 18 events.

Despite the tear Jason Day was on come playoff time, Jordan Spieth was the one who ended up winning the playoffs and receiving that prodigious $10 million check. Spieth won five times in 2015, including two majors.

Spieth, the world #3, is still considered an elite player, but he has found the bar he set in 2015 to be extremely difficult to pass. He does have two wins in 2016, but his form has been greatly questioned since he blew a five-stroke lead on Sunday at The Masters. He did not factor into any of the other majors, and as unfair as it might be, he may need a great playoff run for his season to not be considered lost.

Spieth is guaranteed to make it through the first few playoff rounds, and his Ryder Cup spot is secure, so he does not have an urgent need for a great week, but he would still benefit greatly from it. He is currently fifth in the FedEx Cup standings.

Phil Mickelson – Between Mickelson being the highest-profile athlete Barclays sponsors and his very large and devout following in the New York area, expect to see a lot of him this week. Mickelson has been reborn this season, and while he has not won, he does have six top-five finishes this year, and recently put together one of the best major performances ever at The Open Championship, finishing runner-up to the Henrik Stenson buzzsaw. Mickelson currently ranks 8th in the FedEx standings.

Jim Furyk – Furyk appeared to be having something of a lost season up until early August, due to missing three months after wrist surgery and struggling to find his form when he came back. All of that changed when he shot an unfathomable 58 in the final round of the Travelers Championship, the lowest round in tour history. It might be a small sample size, but his last five rounds have been an all-time great ball-striking stretch. As a former FedEx Cup Champion, Furyk knows how to handle himself in these playoff tournaments.

Rory McIlroy – Similar to Spieth, McIlroy has set the bar sky high, and is looking to add a great finish to a moderately disappointing season. Rory won the Irish Open and has five other top-5 finishes between the U.S. and Europe, but he was a non-factor in the majors, missing the cut in two of them. He is currently 36th in the FedEx Cup standings.

Russell Knox – Currently 4th in the FedEx Cup standings, Knox is having a breakthrough season with two victories and two runner-up finishes. He won his most recent tournament, The Travelers Championship.

Adam Scott – Currently 3rd in the FedEx Cup standings, Scott is a former Barclays champion and has two wins on the year, but has barely been heard from since early March. If he has been holding anything back, look for it to be unleashed in the playoffs. He leads the tour in shots gained: tee-to-green.

Justin Rose – Re-invigorated after winning Olympic gold, Rose will be among the most-watched players in the field this week.

Henrik Stenson –In his past three events, Stenson has a major championship, contended at another major, and won a silver medal at the Olympics.  He is likely the most feared golfer in the field.