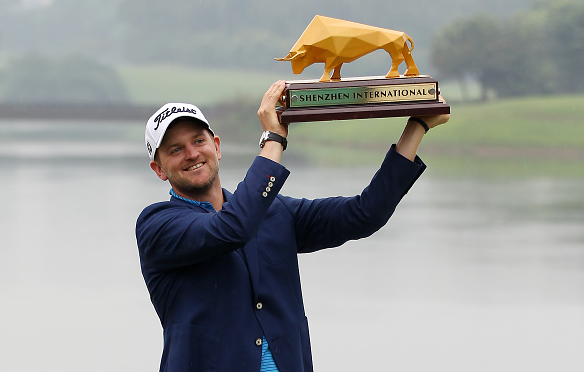 Austria’s Bernd Wiesberger beat Tommy Fleetwood in a playoff to win the Shenzhen International at Genzon Golf Club in China.

Wiesberger entered the final round three-shots clear of the field, and a eight shots up on Fleetwood. But following a 71 by Wiesberger and a 63 by the Englishman Fleetwood, the two were tied at 16-under after 72 holes.

On the first playoff hole, Wiesberger hit his tee shot over the water and ended up on the edge the bank. Fleetwood played it more conservatively, landing further away, but safely in the middle of the fairway. His approach shot found the middle of the green, and so the advantage appeared to be Fleetwood’s.

Wiesberger, however, hit a near-perfect approach, once again over the water, to five feet, and then drained the birdie putt for the win.

Winner of the #ShenzhenIntl, beating Fleetwood on the 1st play-off hole. ? pic.twitter.com/MOya0STa4o

“I’m feeling a bit relieved now I have to say. I’ve had a stretch of really good events the last couple of months and it’s really nice to have a trophy again.”
-Bernd Wiesberger, Shenzhen International Champion

"I wanted to show them I was up for it and I did."