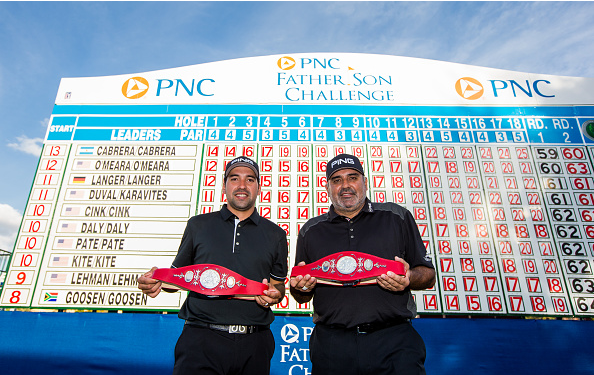 Angel Cabrera, and son Angel Jr., teamed up for a final-round 12-under 60 at The Ritz-Carlton Golf Club to capture the 2017 PNC Father-Son Challenge. 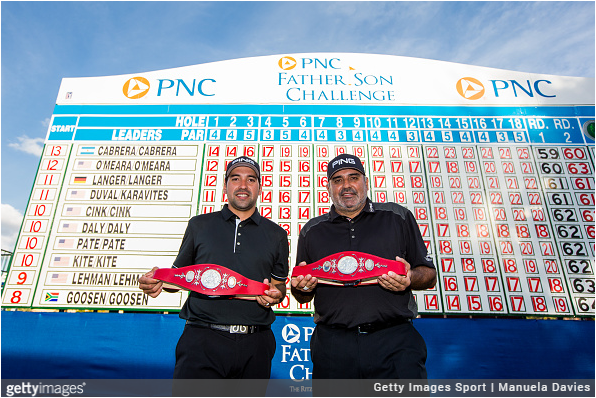 Entering Sunday with a one-shot lead, the Cabreras turned at 30, and matched it on the back to finish with a tournament-record 25-under 199, three clear of Bernhard and Jason Langer, and David Duval and Nick Karavites, who tied for second at 22 under.

“This is certainly my best week of the year. To play alongside all the legends like Nicklaus, Trevino, Faldo, Langer and so many others, as well as playing alongside my son, has been the greatest week of the year,” said Cabrera, a two-time major winner, who won the 2007 U.S. Open and 2009 Masters.

“There is no comparison to any tournament I’ve played in the past, its been so special here,” added Angel Jr., who has played on both the PGA Tour Latinoamerica and the Mackenzie Tour.

Along with the Willie Park belts – named for the first father and son duo to win the Open Championship, Willie Park Sr. and Jr – the Cabreras also took home a first-place check worth $200,000.

Mark and Shaun O’Meara finished one further back at 21 under, alongside Jerry and Wesley Pate.

Jack Nicklaus teamed up with his grandson, G.T. The duo shot a 8-under 64, good for 15th place in the field of 20 teams.

“We didn’t shoot a really low score this week but by gosh, we had a lot of fun,” said Nicklaus.