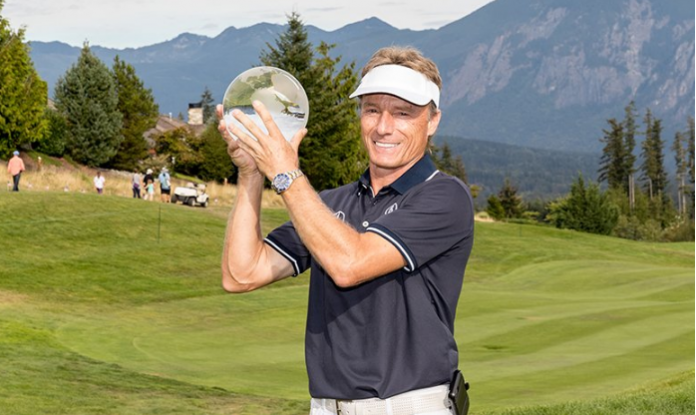 In today’s PGW Daily, we talk Ryder Cup, Champions Tour, and LPGA.  We also show you why Patrick Reed is so excited, and why being Gary Player isn’t so bad.

Putt of the Year

Jason Day’s 71-foot putt at the 15th hole of Sunday’s final round is one of the best putts you will ever see. Day showed why he leads the tour in strokes gained: putting.

Bernhard Langer has been destroying the Champions Tour this year, and added another trophy to his season arsenal. Langer went on a back nine birdie binge at the Boeing Classic, going under par on 10, 11, 12, 13, 15, and 18 to sneak into a playoff with Kevin Sutherland and Woody Austin.

Langer birded the first playoff hole to win. He now leads the Charles Schwab Cup standings by nearly $800,000. The gap between Langer and #2 Miguel Angel Jimenez, is larger than the gap between Jimenez and #27 Mike Goodes.

"There's still a little bit of life left in me." – Langer, who turned 59 on Saturday

Awwww Pic of the Day

Paula Creamer walking with her dad.

Happy birthday dad!!!!!! You stood in front of me to protect me. You stood behind me to catch me when I fell. You stood by my side to support me when I was alone. Thanks for standing by me all the time. I love you 1089 dad. ?❤️

1. Wesley Bryan: Three wins earned him immediate promotion early this month. Known for his trick shots on Youtube, he contended over the first two days of the John Deere Classic.

6. Ollie Schneiderjans: The 23 year old Texan finished T12 as an amateur at the 2015 Open Championship

15. Brian Campbell: Was a surprising first-round co-leader at 2015 U.S. Open at Whistling Straights. Bookended first round 67 with a final round 68.

Ryan Armour posted a pic of his PGA Tour card for next year, which he qualified for via the Top 25 of the Web.com Tour.

Same for Joel Dahman, the last one in.

A roller-coaster weekend for Joel Dahmen.

The Ryder Cup came to the Today Show. American Captain Davis Love III has taken it on several other shows as well.

Dance of the Day

Tony Finau’s son has some moves!

Thomas Pieters leads the European Tour in victories over the past year.

Thomas Pieters: The Belgian is 9th on the Points Cup List, won yesterday at the Made in Denmark, his 3rd win in the past 12 months (leads European Tour)

Russell Knox: The Scot won twice on the PGA Tour this year. He ranks 10th on the World Points List.

Martin Kaymer: The two-time major winner fell just short on both points lists. He finished T7 at the PGA Championship and T15 at The Olympics.

Lee Westwood: Has 23 career victories, but famously no majors. Finished T2 at The Masters. Currently 9th in Race to Dubai Rankings.

Luke Donald: Donald’s name has floated today as a potential surprise pick for Clarke. Has played well in the U.S. as of late, but has not finished higher than T27 in any European Tour event this season.

Player of the Day

Gary Player still has it!

Wonderful start to #GolfandGiving, thanks for a fantastic evening! pic.twitter.com/ZZXqmAUURr

Reed signs autographs for children after his victory at The Barclays.

A true champion always finds time for the fans.https://t.co/mPGhq6r62a

Steven Bowditch stepped up when someone needed a guest for their podcast.

Tweet of the Day Part II
Speaking of Bowditch… Always in good humor, Bowditch is keeping his spirits up despite a nightmare season.

Currently working on stabilizing my my lower half and feet more by adding more mass around the mid section!? ??? https://t.co/j5NjwEpp7D

A Different Kind of Therapy

Russell Knox is trying a different physical therapy method. With two wins on the year, who can question him?

Look who popped in to get their Cryo fix! Local PGA golfer Bud Cauley with his fitness trainer ! pic.twitter.com/E8DMqG487p

Thailand Sensation Ariya Jutanugarn won the CP Women’s Open in Canada. At -23, Jutanugarn won by four strokes over Sei Young Kim. The victory is Jutanugarn’s fifth of the year, with all five coming in her last 10 events.

Ariya Jutanugarn with a special gift from @HockeyCanada for winning the @cpwomensopen pic.twitter.com/gc28ZByZau

The LPGA Tour will stay in Canada another week for the Manulife LPGA Classic. It is the last event before the last major of the year, The Evian Championship on September 15th.

Between Patrick Reed, Thomas Pieters, and others, it was a great weekend for reps of Callaway Golf.

Easier question: Who *didn't* win something with their Callaway clubs today? https://t.co/dRkNq5GsPH