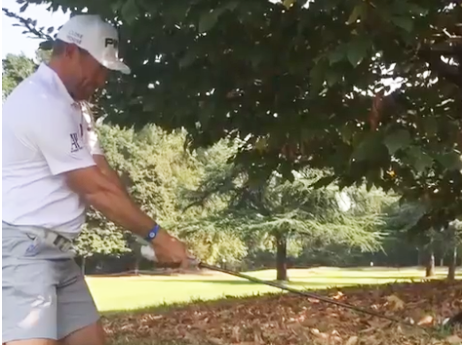 In today’s PGW Daily, rain has invaded the Italian Open, the LPGA is in France, and we flash back to a younger Justin Rose.

With all the talk of Lydia Ko, Ariya Jutanugarn, and Brooke Henderson, Rookie and South Korean star In Gee Chun came into the Evian Championship, the last major of the LPGA season, a little under the radar.

After a sizzling first round 63, which included eight birdies in her first 13 holes, Chun leads the Evian. She hit all 18 greens in regulation. The world’s #7 ranked female golfer, is coming off three straight top-eight finishes. Nicknamed “Dumbo”, she made headlines last season when she won the 2015 U.S. Women’s Open. It was her first time playing the U.S. Open.

Had a great time in #banff What an amazing place ?? pic.twitter.com/Q1cy63AJUV

Lexi Under the Weather

Lexi Thompson, the highest ranked American female golfer, had to play the first round of the Evian Championship after spending the night awake and sick. Through 10 holes, Lexi is at even-par, eight strokes behind leader In Gee Chun.

Even though I had a rough night of throwing up, I did manage to get a little sleep and I feel better now ?? #timeforroundone #evianchamp

Steven Bowditch, who has been struggling on Tour this year, likes to poke fun at himself on twitter. His most recent post is hilarious:

Sunrise Doesn’t Get Nicer Than This

The Champions Tour is at Pebble Beach this week, and recorded the morning sunrise from #18.

Flashback of the Day

Justin Rose way back in 1999 with his TaylorMade clubs. It is amazing how much golf club technology has progressed.

The European Tour is in Italy this week. So is the rain. By the looks of the 18th green, this may get delayed a bit.

Club Cover of the Day

The Web.com Tour is in Boise for the Albertson’s Boise Open, the second round of the Web.com finals. Keith Mitchell has one of the more interesting putters out there.

Andrew ‘Beef’ Johnston, who is in Boise this week attempting to acquire a PGA Tour card is eating the kind of snack you would expect him to be eating:

John Peterson had someone try to poke fun at him. His response was great.

This post from bhughesgolf shows the swings of Sam Snead and a very young Tiger Woods.

The PGA Tour posted a GIF of another Bryan Bros amazing trick shot:

"I'd never be shocked if you said the Bryan brothers wouldn’t take the road most traveled."https://t.co/gsBJrlkonf pic.twitter.com/JhVdPLizxM

For a Good Cause

LPGA World #1 Lydia Ko is helping out a charity:

Thank you #LydiaKo for supporting my cause. Nice to see you again. Amazing player inside and out pic.twitter.com/LmBgp9n91m

Lee Westwood had a drive end up in a rough position during the Italian Open Pro-Am.

While we wait for the weather, here's @WestwoodLee channelling his inner Seve during the Pro-Am. ?#ItalianOpen pic.twitter.com/guZOFVrs9e

The Big Bertha OS irons and hybrids from Callaway are among the most exciting releases coming tomorrow.

Sepp Straka Shoots 63, Leads Tokyo Olympics After Round One