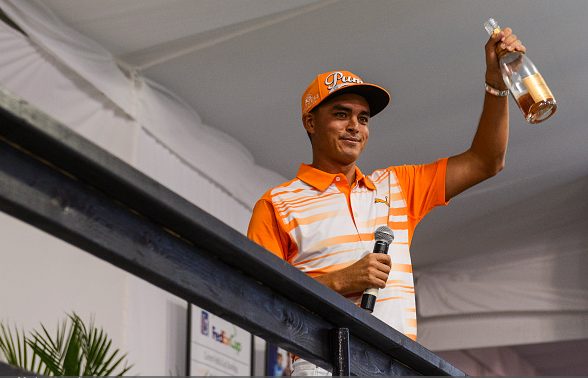 After an exhausting 41 weeks highlighted by an extremely compact summer, there are only four weeks left in the season. The Tour moves from New York, the location of the first round of the playoffs (The Barclays), to Boston for the Deutsche Bank Championship, where the 100 remaining golfers in the FedEx Cup standings will compete in round two.

Thirty more golfers will be eliminated at TPC Boston, with the remaining 70 receiving invitations to next week’s BMW Championship in Carmel, Indiana. FedEx Cup #1 Patrick Reed leads an elite field containing 99 of the world’s 100 best (only Danny Willett is sitting out), with their eyes on the largest prize in golf: $10 million dollars.

The Deutsche Bank Championship has not been around as long as most tournaments, with the first edition conducted in 2003 and won by Adam Scott in a four-stroke rout over Rocco Mediate. The tournament, which has been held at TPC Boston every year, was added to the playoff schedule in 2007. That year’s Deutsche Bank Championship was won by Phil Mickelson. Vijay Singh is the only two-time winner, with victories in both 2004 and 2008.

Interestingly, players have had trouble closing out this tournament in recent years. The past six 54 hole leaders have lost, including Henrik Stenson in 2015. Steve Stricker was the last to convert a third round lead into a fourth round victory, in 2009.

This year’s event is the last year that Deutsche Bank is under contract to sponsor, leaving the tournament’s future in jeopardy.

The defending champion is Rickie Fowler. At a tournament where the scoring was not as low as usual, Henrik Stenson held a one-stroke lead at the 54 hole mark, but Fowler staged a furious Monday comeback making up a three shot deficit over the last eight holes.

A double-bogey on 16 by Stenson put Fowler into the lead for the first time, and at -15, Fowler was the winner by one stroke.

Fowler did tremendous with limiting mistakes, with just four bogeys over days. The only other golfer to hit double-digits under par for the tournament was Charley Hoffman, who took third place at -11.

At The Barclay’s the FedEx Cup playoff positioning was somewhat overshadowed by the Ryder Cup automatic qualification drama. With eight of the 12 Ryder Cup spots now accounted for, FedEx takes back center stage this week. The top 125 at the end of the regular season received invites to the Barclay’s with 25 golfers being eliminated at the conclusion of the tournament.

Thirty more will be eliminated after the tournament’s end on Monday. As of now, Chez Reavie at #70 would be the last one in next week’s field (the BMW Championship), with #71 Marc Leishman being the first out.

Everyone currently ranked between 70 and 100 will need to at least make the cut to have a chance of moving on. Notables in that range include #75 Chris Kirk, #77 Billy Hurley III, #84 Jim Furyk, #86 Danny Willett (who is not playing this week), #95 Vijay Singh, and #97 Steve Stricker. The current bubble boy is #100 Chad Campbell.

With this tournament being worth 2000 FedEx Cup points, anyone can move from being on the outskirts to being right in the mix for the $10 million reward. The best example is 2014’s runner up, Billy Horschel who was #82 going into the Deutsche Bank.

The second place finish vaulted him near the top of the rankings and with subsequent wins at both the BMW and the Tour Championship, Horschel claimed the largest prize in golf.

This week’s winner is guaranteed to jump to at least #6 on the overall rankings, which is significant because anyone in the top six going into the Tour Championship automatically wins the FedEx Cup. Currently, that top six is comprised of Patrick Reed, Jason Day, Dustin Johnson, Adam Scott, Jordan Spieth, and Emiliano Grillo.

Eight of the twelve Ryder Cup positions were secured after The Barclays. Those eight were as follows:

Those positions are locked in. Nothing that happens in Boston will change that.

However, there are still four spots to be filled, which will be determined by American Ryder Cup Captain Davis Love III. The current favorites for those spots are believed to be #9 Bubba Watson, #11 Rickie Fowler, #12 Matt Kuchar, and #15 Jim Furyk, but the Deutsche Bank should go a long way to determining the rest of the team.

Also in the mix are #10 J.B. Holmes, #13 Scott Piercy, #14 Bill Haas, and #16 Daniel Berger, among others. Three of the four Captain’s picks will be announced on September 11 (after the BMW), with the last being named after the Tour Championship. These next two weeks are absolutely critical for those wanting to be named to the team.

Last year’s Deutsche Bank winner was Rickie Fowler, and in this year’s defense of that win, his recent form has not been especially good. His T7 at The Barclays, where he was the 54-hole leader was his best finish since a T4 at the Wells Fargo Championship in early May. He was also the defending champion at The Players this year, but failed to make the cut. He finished under par at only one major this season, a -3 at The PGA Championship which was good for a T33.

A top three finish at The Barclays would have locked up a Ryder Cup spot, but Fowler floundered down the stretch, playing the last four holes at four-over par, leading to the T7.

While Fowler is considered a favorite for one of the Ryder Cup Captain’s picks, it is by no means a sure thing. He will need to play the next few weeks with a sense of urgency. At #16 in the FedEx Cup standings, Fowler is a lock to get past TPC Boston, but his sights will be set much higher.

Jason Day – Day, the world #1 ranked golfer, has not won since his Players Victory in mid-May. Since then, however, Day has made the cut in all seven events he has entered, with no finish worse than a T27 at The Memorial. He was the solo runner-up at the PGA Championship and was T4 at the Barclays, results which indicate that future victories may be imminent. Day leads the Tour in strokes gained: putting and trails only Phil Mickelson in scoring average.

Henrik Stenson – The Open Championship winner and Olympic silver medalist withdrew from The Barclays after a first round three-over 74, citing pain in his surgically repaired left knee. Stenson claimed the withdraw was precautionary, and he is likely to make his Thursday tee time. Stenson was the 2013 FedEx Cup champion, and finished runner up at last year’s Deutsche Bank.

Ryan Moore – the former superstud amateur is hot as of late, winning the John Deere Classic and finishing T7 at The Barclays. At 11th in the FedEx Cup standings, Moore may be peaking at the right time.

Sean O’Hair – O’Hair appears to be the early favorite to be this season’s Billy Horschel. He began last week at 108th in the standings, but rocketed up to 15th with his T2 at The Barclays. He finished T4 at last year’s Deutsche Bank.

Dustin Johnson – By his standards, he has not played well lately, following up a missed cut at the PGA Championship with a T18 at The Barclays. However, prior to the PGA Championship, Johnson had finished in the top nine of his previous six tournaments, including victories at the U.S. Open and the WGC-Bridgestone Invitational. DJ has earned a staggering $7.3 million in 2016, trailing only Jason Day’s $7.9 million.

Jordan Spieth – The defending FedEx Cup Champion has not fared as well this year as he did in 2015, but the 23-year-old still has two victories on the season and finished T10 at The Barclays.

Billy Horschel – Another prime candidate to be this year’s Billy Horschel is Bill Horschel himself. With a T5 at the Wyndham Championship and a T13 at The Barclays, Horschel’s game is trending in the right direction. He is currently 51st in the FedEx Cup standings.