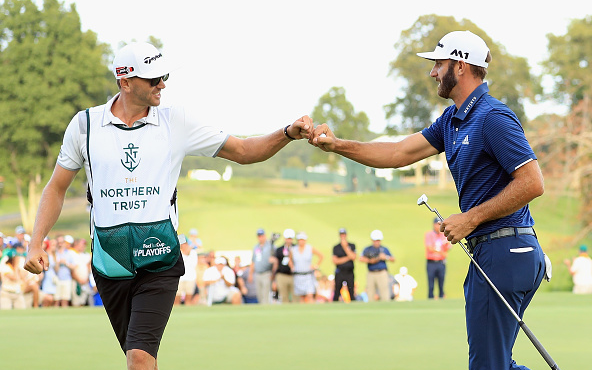 It may have lacked the glamorous backdrop and cavalier smack talk of Floyd Mayweather vs Conor McGregor, but Dustin Johnson vs Jordan Spieth was undoubtedly the duel of the weekend. 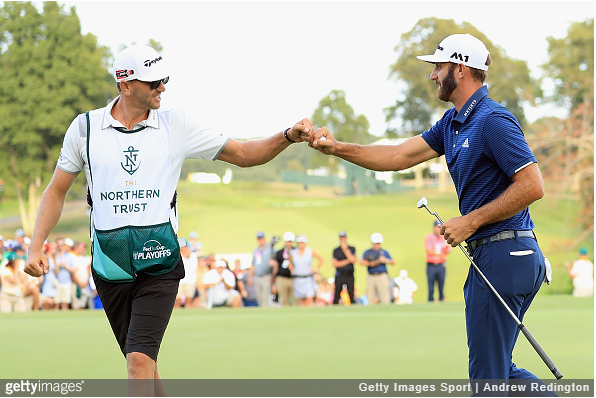 Furiously clawing his way back from five-stroke deficit after five holes, Johnson tied Spieth after a birdie on 10, leading to a de facto match play between two of the PGA Tour’s elite heavyweights.

They exchanged blows down the stretch, and after two unbelievable par putts on the last two holes, the first by Spieth, the second by world No. 1 Johnson, The Northern Trust needed to be settled in extra holes, a playoff in the playoffs.

On the first playoff hole, a high-risk decision off the tee by DJ led to an even higher reward: a birdie and a victory in the first round of the FedExCup Playoffs. Johnson’s bogey-free 4-under 66 was enough for him to claim his fourth victory of the season, and the 16th of his career.

Nobody had ever defeated Jordan Spieth in a PGA tournament when Spieth came into the final round with a lead of two strokes or more (5 for 5). It was a huge challenge for Johnson, but he proved to be up to it. 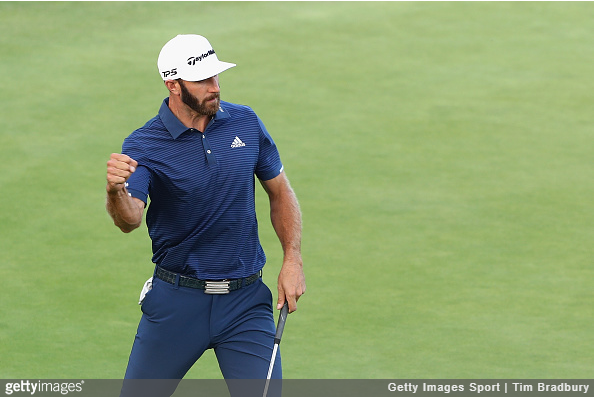 Starting the day three strokes behind Spieth, Johnson opened with eight straight pars. He dropped to five back after Spieth birdies on 3 and 5, but a double-bogey on No. 6 and a bogey on 9, coupled with a DJ birdie on the same hole, truncated that lead to just one at the turn.

After Johnson birdied the 10th, it was all tied up. Still tied going into the 18th, and all other contenders having played their way out, Johnson barely slipped in an 18-ft birdie putt, forcing a playoff.

Going back to 18, Spieth hit first and split the fairway. Johnson responded by taking an extremely aggressive line over the lake, and played it perfectly. His 341-yard drive was the longest of anyone at No. 18 for the week, and left him just 95 yards to the hole, nearly half of what Spieth had. 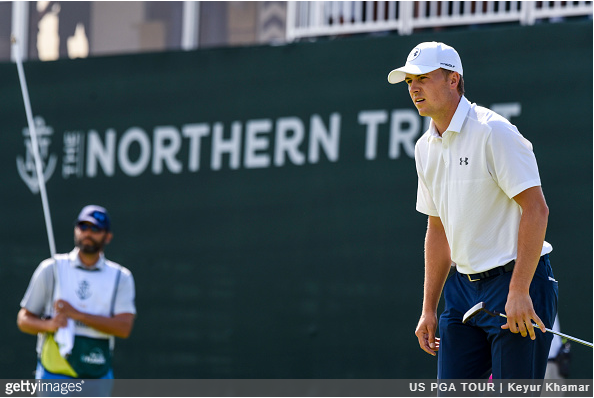 DJ then knocked his approach within three feet of the hole, and after Spieth was unable to convert a long-distance birdie putt, he calmly sunk his short putt for birdie and the win.

Incredibly, Johnson played his 36 back-nine holes over the four-plus rounds bogey-free. It also helped greatly that Johnson led the field in shots gained, both off-the-tee and tee-to-green, finished second in driving distance, and third in greens in regulation.

WHAT IT MEANS FOR D.J.

After his final round, Johnson expressed that he is back to feeling the way he did earlier in 2017, when he won three consecutive tournaments.

That form is largely what got him to World No. 1 in the first place, and if he has that dominance in him again, he suddenly becomes the clear favorite to win the FedExCup and the $10 million prize that barely eluded him in 2016. 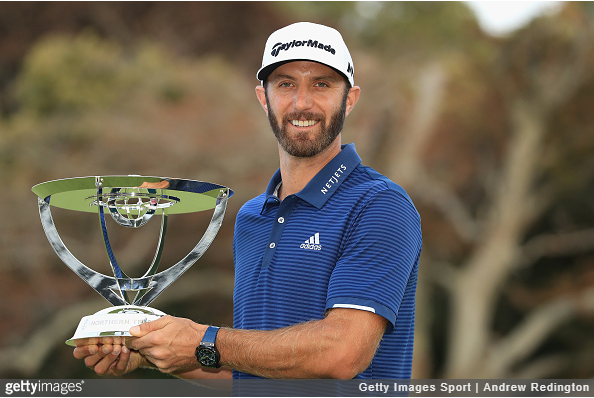 He is now No. 1 in the FedExCup Standings, a three-spot jump from No. 4, where he began the week.

With this win, DJ arguably jumps back into the conversation for PGA Tour Player of the Year, an award for which he is the defending winner. With no major championship victories on the year, he is probably still behind Justin Thomas (4 wins, 1 major) and Spieth (3 wins, 1 major), but with three weeks left to settle it, Johnson has made sure it will not be just a two-person battle.

No, The Northern Trust was not match play, even though it felt like it for the final two hours. Two of the biggest contenders going into Sunday, were Paul Casey and Patrick Reed, who were in a tie for 3rd place, five strokes behind Spieth. 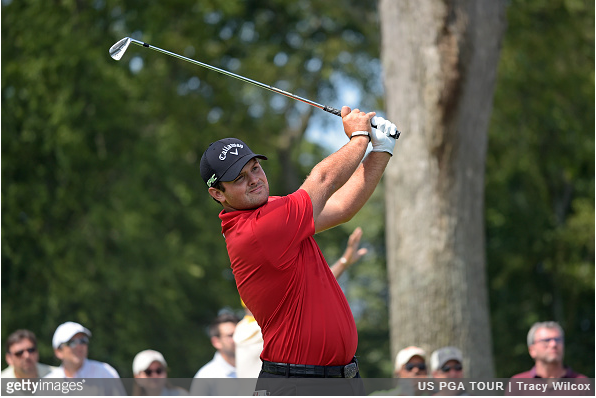 Casey carded bogeys on four of his first six holes, digging an early hole that even a tremendous back nine could not get him out of. He finished with a 1-over 71, dropping him to solo 5th place.

Reed, who finished runner-up at his most recent start, the PGA Championship, was even worse. The 27-year-old bogeyed four his first five holes, and then had nine straight pars before adding three more bogeys over his final four holes. Reed shot 5-over 75 and dropped into 20th place.

The low round in the Sunday field was a 5-under 65, shot by three players. One of those players, Jhonattan Vegas, was a 36-hole co-leader after also shooting 65 in round two. 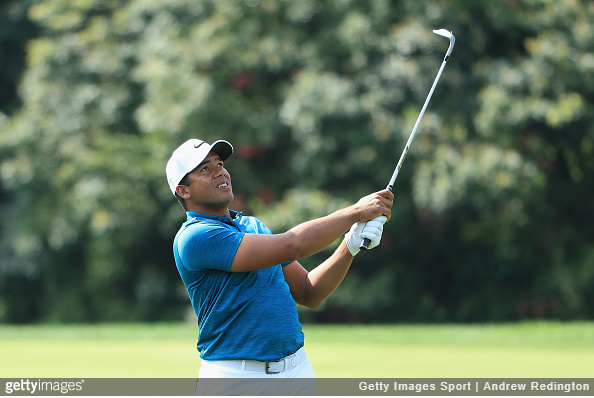 If not for a third-round 72, Vegas might have been a more prominent player in the final round mix, but he still finished T3, his best ever result in a FedExCup Playoff event.

Six birdies catalyzed a 65 from Webb Simpson, who finished T6, his second-straight top 10 finish, and fifth of the season.

A 65 from Charley Hoffman made up for an otherwise disappointing week, as he moved 35 spots up the leaderboard into a tie for 17th place.

DJ and Spieth playing well was no surprise, but what was shocking was that in the tournament within the tournament, the FedExCup Bubble Watch, only three players who came into the week outside the top 100 played their way into it, and thus securing their position at TPC Boston in Round 2.

Among those three, the biggest mover was Bubba Watson, who after an up-and-down final round of even par, finished in a tie for 10th place, moving him from 113th to 72nd in the standings, giving him a great shot at moving on to round three as well. 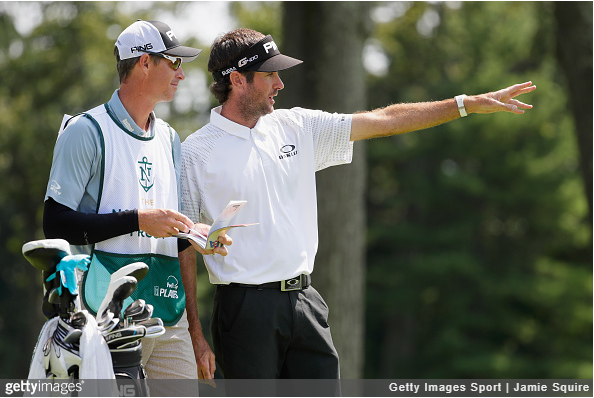 Harold Varner III played his way into the top 125 and the regular-season ending Wyndham Championship, and decided he did not want to stop there. Varner III’s final round of even par included one birdie, one bogey, and 16 pars, leading to a T20 for the week, and moving him from 123rd to 91st in the standings.

The third bubble buster was Sweden’s David Lingmerth. At No. 103 in the standings coming into the week, and in a tie for 17th coming into the final round, Lingmerth looked to be in great shape to advance, but after a front nine stretch where he went double, bogey, bogey, bogey on 5-8, things got a little tense.

However, Lingmerth was able to collect himself, playing the back nine in bogey-free 2 under. His final round 73 dropped him in the tournament standings, but he still stayed above the FedExCup cut line, and now goes into the Dell Technologies Championship at No. 87.

There were nearly two others, but a final-round 73 from Martin Flores and a 74 from D.A. Points knocked them back below the top 100 after they they had appeared to play themselves into next week.

Phil Mickelson is hoping that Steve Stricker was not watching him on Sunday. Trying to impress Stricker, the Presidents Cup Captain, and perhaps capture spot on the roster as a Captain’s pick, Mickelson needed a tremendous week to overshadow his recent poor play. 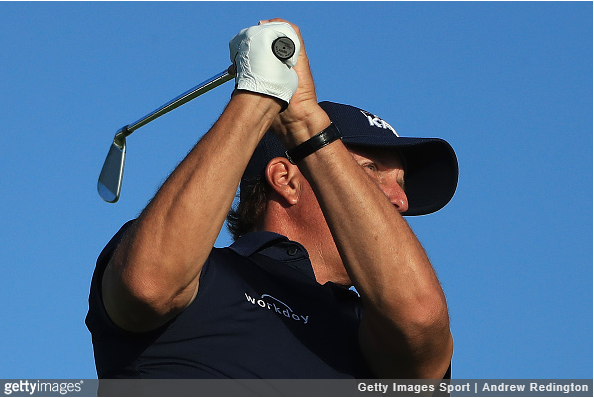 A second round 68 helped, a third round 71 didn’t help, and a final round 75 really, really did not help.

Mickelson, who has been on every Presidents Cup roster was not able to conjure up a single birdie on Sunday, and was an absolute disaster on the greens. Three bogeys and a double led to the 5-over round, and a dismal finish of 6-over, which meant a tie for 54th.

At No. 58 in the FedExCup Standings, Mickelson will still be in Boston next week, but he is running out of chances, if he even has any left.

“I’m expecting to play very well. I feel like the game is finally back in form like it was leading into the Masters. I feel like I’m swinging everything really well. Got a lot of control over the golf ball. I’m feeling really good. Obviously getting the win here today gives me a lot of confidence going into next week and the rest of the Playoffs.”