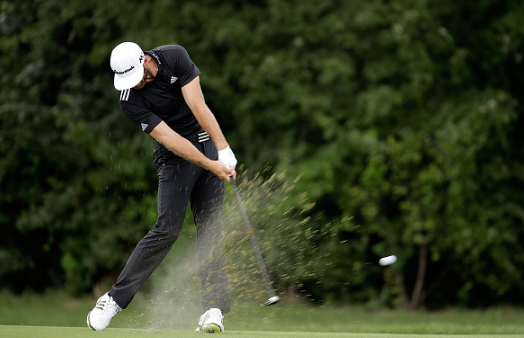 A day after an insane 63 from Dustin Johnson, which included two eagles, it looked like he was sleepwalking early on. He was at even-par after 13 holes, but like DJ does so often, he put his foot on the accelerator and reasserted his dominance, adding birdies on 14, 15, 16, and 18 to shoot a 4-under 68 and take over solo first after three rounds of the BMW Championship at Crooked Stick.

With one round to go, Johnson leads the recently-hot Paul Casey by three strokes and Ryder Cup hopeful J.B. Holmes by four.

Dustin Johnson’s game did not appear as effortless as it did yesterday, but he still played well and ended up extending the lead he co-lead to start the day. His birdie binge on the second half of the back nine awoke him, and if he keeps the momentum going into tomorrow, he will be difficult to pass on the leaderboard.

A win would not only vault DJ to the top of the FedEx Cup standings, but would cement him as the bonafide leader to win PGA Player of the Year. He has the long and short games going, as he leads the field this week in driving distance and strokes gained: putting.

Adam Scott picked a great time to have a bogey-free round. He shot what tied for the low round of the day with a 5-under 67.

Billy Horschel, who is looking to make a Billy Horschel move up the FedEx Cup standings, also had a 67. First place is probably out of reach for Horschel, but with a similar, or better, round tomorrow, he could still get that high finish he desperately needs to extend his playoff.

Roberto Castro was a co-leader after 36 holes after consecutive 65s, but did not play anywhere near as well today. He had an unfathomable zero birdies, and adding his two bogeys to that total, Castro finished with a two-over 74.

Despite all the movement today, only two players who were were outside the top 30 to begin the week are projected to move in: J.B. Holmes (42nd to 13th) and Daniel Berger (31st to 29th). With those two potentially moving in, Ryder Cup member Brooks Koepka (30th to 37th) and Open Champion Henrik Stenson (24th to 34th) are projected to move out.

Stenson took a huge risk sitting out this week to rest a knee injury, and at least in the short term, it does not look like it will pay off. His goal was to be as close to 100% as possible for the Ryder Cup in three weeks, and in that respect, it could still pay off.

“I thought I played pretty solid today. It was tough, the wind was blowing pretty hard and in a little bit different direction. It made the par 5s play a little bit tougher. With all the rain we got last night, I struggled with the speed a little bit early in the round, kept leaving everything short, but got a pretty good handle on it on the back nine, and finished off very nicely.”
–Dustin Johnson, 54 hole leader.