Charley Hoffman fired a 9-under par 63 on Friday at Albany and will take a three-shot lead into the weekend at the Hero World Challenge. 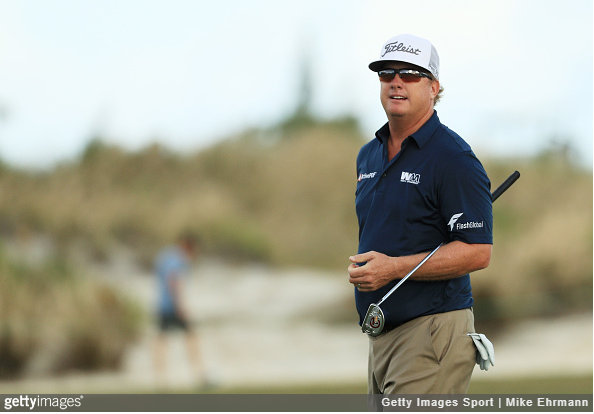 Hoffman, who started his round on the second page of the leaderboard at 3 under, finished with a record 12 birdies, highlighted by five straight to close.

The 40-year old San Diego native was on fire from the start, and went out in 31 to reach 8 under. After back-to-back bogeys on 12 and 13, Hoffman righted the ship, and then some – carding five-consecutive red numbers, including a hole-out bunker shot on 17.

Afterwards, Hoffman cited his work with the flat stick for his record-setting performance on Friday.

“I got the ball to the hole and the balls were going in, which was nice. And then on 17 I was able to make a bunker shot to sort of cap off the day,” said Hoffman.

Jordan Spieth and Tommy Fleetwood were three back at 9 under.

Spieth opened with a birdie on one, but then matched a pair of bogeys with two birdies over the next five holes. After that up-and-down stretch, it was flawless golf the rest of the way for the World No. 2, as Spieth closed bogey-free with two sets of back-to-back birdies (8-9 and 14-15).

“I feel good,” said Spieth. “Everything’s in good shape going into the weekend. Charlie went pretty nuts, so coming from behind a few shots, but it’s a pretty bunched leaderboard and out here we know you’ve got to make birdies.”

Fleetwood, meanwhile, turned in 33 with four birdies and a bogey, but the Englishman ran into trouble early on his inward nine with a double-bogey on 10, followed by a bogey on 11. He quickly recouped those three lost shots with a hat trick of birdies on 13, 14, and 15 to get back to 9 under.

“Yeah, a bit more up and down today. I played really nice, putted well without holing any long ones, some nice mid range ones to get off to a nice start,” said Fleetwood. “Just a couple of wayward drives on 4 and 10 were the only two. So the only mistakes I made, 11, I won’t be the only one that makes a mess around the greens this week.

“You try to be aggressive off those lies, just rolls over the back, make bogey. But yeah, came back well, three birdies in a row in the middle of the back nine and yeah, good day.”

Justin Rose shot a second-consecutive 68 and is alone in fourth at 8 under.

Tournament host Tiger Woods had the galleries in a frenzy when he made eagle on the 9th to turn at 31. A birdie on the par-5 11th got Woods to 9 under and the outright lead, but the 41-year old ran out of gas down the stretch, finishing with a pair of bogeys against five pars to sign for a two-day score of 7 under.

“I think it was successful because I went out there and shot 31 on the front nine and built upon what I did yesterday. I cleaned it up. The only thing I struggled with was the speed of the greens,” said Woods, who finished with 26 putts.

“Henrik (Stenson) and I were talking about it all day is that they seemed to be like a foot faster. I really did struggle getting the speed and I blew most of them well past the hole and made a few coming back. I also missed my share, too.”

“You know, I’d be lying, we’re all cheering for Tiger to play great golf. It’s a good time to be out here for his foundation, and obviously I want to beat him just like everybody else does but in the back of our heart we’re all cheering him on.”
– Charley Hoffman