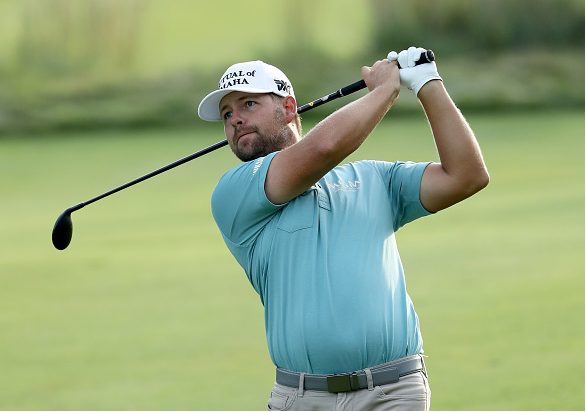 Today was, bar none, the best James Hahn we have seen all year. Hahn was bogey-free today, hitting all 14 fairways, in addition to 15 of 18 greens, good for a six-under par 65. He is currently tied with red-hot Ryan Moore after the first round of the Deutsche Bank Classic, the second round of the FedEx Cup playoffs.

Hahn had the best round of the day, but he was far from being the only one to play well. In a tournament that usually plays the least difficult of the playoff events, 80 of the 97 golfers in the field shot a round of even-par or better. More than one-third of the field is -3 or better.

As mentioned earlier, James Hahn was flawless today. There was not a major statistic that he did not dominate. Ryan Moore was similarly brilliant, also going bogey-free. He was not as phenomenal off the tee as Hahn, but he did lead the field in shots gained: approach the green.

Moore came to Boston in great form, winning the John Deere Classic three weeks ago, and finishing T7 at The Barclays.

Brian Stuard and Billy Hurley III both have a win on the season, Stuard at the rain-shortened Zurich Classic in May and Hurley III at the Quicken Loan National in June, but neither have a top 10 on the season outside that win. Stuard bogeyed two of his last three holes, but still finished at five-under par, and is currently T3.

Hurley III joined the co-leaders in the bogey-free round one club, and shot four-under 67. Henrik Stenson has set the bar high and is now always expected to play well, but after withdrawing from last week’s tournament with a knee injury, and announcing that he will miss next week’s BMW Classic to rest that knee, the three-under 68 he shot is very impressive.

Phil Mickelson had a complete nightmare stretch of holes on middle of the front nine, with a bogey on 5, a quadruple-bogey 8 on 6, and a bogey on 7. He bounced back nicely, going bogey free on his back nine, but the damage had been largely done. Mickelson’s +4 only beat two other players.

One of those two players was Charley Hoffman, a former champion at this event, who tied the all-time tournament scoring record in 2010. Hoffman’s round was also slaughtered by a horrendous three hole stretch, with a bogey on 11, a double bogey on 12, and a triple bogey on 13. Hoffman finished with a five-over 76. Fortunately for Hoffman, he’s a lock to make it to the next round.

Automatic qualifying for the Ryder Cup ended last week, but American Captain Davis Love III has four captain picks left to make. Among those in the mix, Jim Furyk and J.B. Holmes played best, shooting four-under 67s. Holmes has played especially poor as of late, and needs a good tournament as much as anyone in the field.

Rickie Fowler also played well, shooting a two-under 69. Bubba Watson was relatively disappointing today, shooting even par. Watson is widely considered a favorite for a wild card, but he has not finished in the top 10 since March.

“Swing like Nick Faldo. I saw a couple Youtube videos of his, but honestly I did a little bit of Boditrak work earlier in the week. I didn’t hit it necessarily that well last week and my track numbers were exactly the same, but I wasn’t hitting it that consistent. I’m doing a little bit of Boditrak work and fixed it up, hit all 14 fairways”.
–First round co-leader James Hahn, talking about what was going through his head during the round.