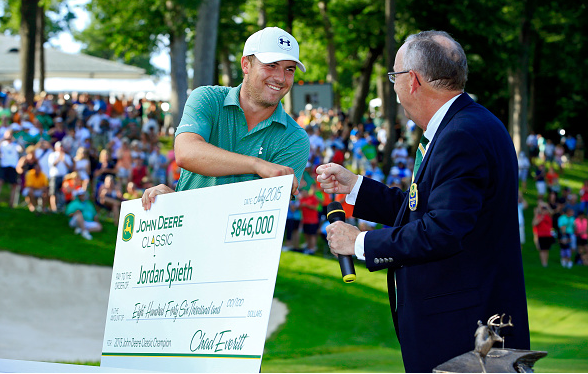 In a sense, it feels like the PGA Tour is on a bye this week. Most of the world’s best golfers are either representing their respective countries at The Olympic Games in Rio, or getting a much needed and deserved respite from the tour’s frantic summer schedule.

While the golfers that fit into one of those two categories are off doing their thing, the rest of the golf world will be at the Quad Cities, just outside of Chicago, for this year’s installment of the John Deere Classic at TPC Deere Run. It may not have the strongest field we will see this year, but what it will have is a plethora of hungry, high-quality players who need this tournament, especially with the FedEx Cup playoffs coming up, and PGA cards soon being dispensed for next season.

To these guys, this is not just another tournament, and that sense of urgency to be able to continue their dream livelihood makes the John Deere Classic one of the hardest-fought and most compelling bouts of the season. It is definitely not a bye week for fans. We were told by many that last week was something of an off week as well, and it ended with social media blowing up over the single lowest round of the million-plus rounds that have been played in the history of the PGA. Pass up viewing this tournament at your own risk.

The origins of the John Deere Classic can be traced back to 1971, when it was a satellite event for the PGA Tour called the Quad City Open. It was originally played in Iowa, moving to Coal Valley, Illinois after just four years, and then in 2000, the John Deere Classic founds its permanent home at TPC Deere Run in Silva, Illinois. It was built over an Arabian horse farm and a number of the elements from that time were incorporated into the design.

TPC Deer Run was designed by former PGA player and three-time John Deere winner D.A. Weibring. Traditionally, the tournament is held the week after the Open Championship, but it was moved on the PGA schedule to accommodate golf’s much-anticipated return to the Olympics.

While the event typically does not draw the biggest names on tour, it has still been the host of a lot of fascinating stories in recent years, most notably the exemptions in 2005 and 2006 for young LPGA phenom Michelle Wie, and Jordan Spieth’s breakthrough victory in the 2013 edition, where a holed bunker shot on the 72nd hole forced a he three-man playoff, which ended with Spieth becoming the PGA’s first teenage victor in over 80 years.

TPC Deere Run typically yields some of the lowest scores on Tour. Each of the past seven editions have finished with a winner at -19 or better. In 2010, it even gave up the fourth 59 in PGA Tour history, as Paul Goydos played a flawless first round.

The defending champion is Jordan Spieth, the world’s #3 ranked golfer. Spieth got off to a slow start with an even-par 71 in the first round. He caught fire after that, going 64-61 over rounds 2 and 3. A final round 68 put him into a tie for first with journeyman Tom Gillis, who was attempting to become the oldest first-time winner in two decades. Spieth won the playoff with a par on the second hole. It was his second career victory at TPC Deere Run.

Unfortunately, Spieth will not be defending his 2015 championship. Spieth said that he didn’t think it would be an “appropriate move” to play the John Deere after withdrawing from the Olympics.

Zach Johnson, the highest ranked golfer in the field at world #22, is as comfortable at TPC Deere Run as any golfer is at any course on tour. The Iowa native’s last five starts at the John Deere Classic have yielded the following results: T3, 2, T2, WIN, T3. His T3 last year was just one stroke out of the Spieth-Gillis playoff. That history shows an intimate knowledge and love of this course, and for that reason, he is one of the favorites this year yet again.

Zach Johnson has not made as big a splash in 2016 as he did last year when he won the Open Championship, but he is still having a good season. He has five top 10s in 20 events, including a T8 at the U.S. Open. His high finish this year is solo-fifth at the Arnold Palmer Invitational. He has missed only one cut since February and ranks 51st in the FedEx Cup standings.

There isn’t a stat that Johnson is conspicuously high in, but as usual, his all-around game is solid and he ranks 18th in scoring average. He is one of the shortest drivers on tour at 280.5 yards, but that has not hindered him at this event in the past.

2. Or is it the Steve Stricker Classic?

Zach Johnson is not the only local who has experienced prodigious success at TPC Deere Run, as Wisconsin resident Steve Stricker has been a star here too. Here are Stricker’s last six results in this event: T35, T11, T10, WIN, WIN, WIN. He was somewhat disappointing in this tournament last year, although he did shoot 65-69 over the first two rounds before posting mediocre scores on the weekend.

In addition to a fantastic history in the John Deere Classic, Stricker’s recent form has been phenomenal. He is ranked #85 in the world, but with his famously abbreviated schedule, the 49-year-old is unanimously considered much, much better than 85th on tour. He did not contend at the PGA Championship (T42), his most recent event, but in his two events prior, he finished solo-fourth at The Open Championship, and T2 at the FedEx St. Jude Classic.

In typical Stricker style, he is #1 on tour in strokes gained: approach the green, #1 in scrambling, and #2 in putting. Similar to Z. Johnson, Stricker is a short hitter (275.5 yards per drive), but distance is not imperative at TPC Deere Run.

With an overall weak field, the John Deere Classic looks very much like it could become a showdown between Stricker and Johnson. Who would have the advantage is up for debate.

3. Positioning for the FedEx Cup Playoffs

Zach Johnson is the only player in the field with legitimate Ryder Cup hopes (he is currently 6th in the standings with the top 8 qualifying automatically), so this tournament is unlikely to factor much into deciding who goes to Hazeltine, but the John Deere field is replete with players who are fighting to get into the FedEx Cup playoffs. They start in two weeks, which leaves the John Deere and the Wyndham Championship as the last chances for players on the bubble.

With the top 125 in the standings qualifying for the playoffs, here are some of the bubble players who are in the field this week, with current ranking:

Other notable players who need a good finish to get into the playoffs include Retief Goosen (134th), Stuart Appleby (142nd), Camilo Villegas (146th), Ken Duke (147th), Brendon de Jonge (150th), and Erik Compton (164th). A lot of the world’s best players will be off partying on the sandy shores of Rio this week, but for many tour players, this week is all business. They will be scratching, clawing, and doing everything else they need to in order to get into that top 125.

Kevin Na – The world #34 is the second-highest ranked player in the field (Zach Johnson). At 12th in the FedEx Cup standings, he is obviously a lock to make the playoffs, but the higher he can get in the standings, the better his chances are of surviving to East Lake. Na has six top-10s this season, and has finished in the top 25 of the last three majors.

Gary Woodland – The long-hitting Woodland has the game to contend on any course. This season has been a minor disappointment, with only two top 10s on the season (T4 at the Memorial, 2 at the Barracuda Championship), but he has been solid overall, only missing three cuts in 21 events and is currently 40th in the FedEx Cup standings.

Keegan Bradley – It feels like forever ago when Bradley was one of the best players on Tour, but he has shown signs of improvement as of late, finishing T8 at The Memorial and T18 at The Open Championship. 11 missed cuts in 23 events is inexcusable for a player of Bradley’s caliber, but he has only missed one of his last seven.

Billy Hurley III – Hurley’s win at the Quicken Loans National was the feel-good story of the year, although he has been pretty quiet since, with his best recent finish being a T22 at the PGA Championship which included a second round 65. At 70th in the FedEx standings, his spot in the playoffs is safe, but he wants to bring as much momentum into them as he can.

Jon Rahm – The 21-year-old Spanish sensation has been incredible since going pro after a T23 finish at The U.S. Open. A T3 at the Quicken Loans National and a T2 at the RBC Canadian Open are his best finishes. He was also competitive at TPC River Highlands this past weekend with two bookend rounds of four-under 67. His card for next season is secure, but as a current non-member, Rahm does not qualify for the playoffs unless he wins this week or next, so if he is close to the lead, he will likely go for broke.