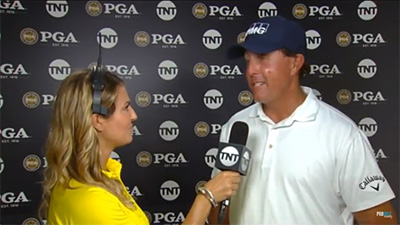 Phil Mickelson fired a 2-under 68 and is at 1-under after three rounds of the 98th PGA Championship.

After his round, Phil stopped and took a few questions from Amanda Balionis of TNT. The video at the PGA is about 4 minutes, but in this clipped excerpt below, Phil predicts that the all time major championship record of 63 will be broken this weekend.