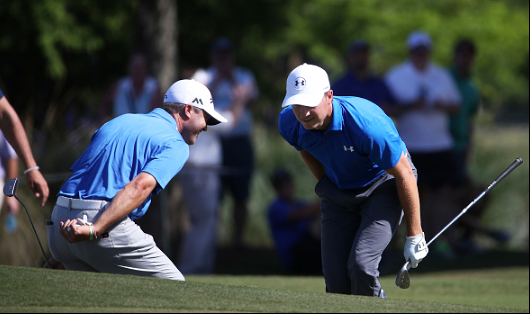 The team of Jordan Spieth and Ryan Palmer posted a 6-under 66 in foursomes play during the first round of the Zurich Classic at TPC Louisiana. The twosome from Texas are tied with the surprise pairing of 18-year-old Ryan Ruffels and Kyle Stanley.

Spieth and Palmer had a clean round of 12 pars and six birdies, while Ruffels and Stanley posted a couple of bogeys against eight birdies and eight pars.

Four teams are one shot back at 5-under, including Ben Crane and Ben Martin, Jonas Blixt and Cameron Smith and Nick Watney and Charley Hoffman K.J. Choi and Charlie Wi.

Jason Day and Rickie Fowler, the pre-tournament favorites, finished at 1-under for the day, and stand at T33. While Justin Rose and Henrik Stenson, another heavy favorite, posted an even-par 72 and are tied for 44th.

Justin Ray, a stat guru at the Golf Channel, says that a win by Ruffels this weekend would be historic.

If Ryan Ruffels wins this weekend with Kyle Stanley, Ruffels will become the youngest winner in PGA Tour history. He turns 19 Saturday.

Spieth with a long bomb bump and run for birdie on the the 14th.

Said Spieth, “I had a pretty straightforward pitch here, had to be aggressive into the grain. Rolled out with nice pace. It was actually a bonus for it to drop, and then pretty fun to be able to celebrate that shot with three guys instead of normally just with your caddie.”

The format for today (and Saturday) was the alternate shot foursomes, but tomorrow teams will play the more popular four-ball format. Despite the uncommon, sometimes frustrating, format of alternate shots, 51 (of 80) teams posted rounds under-par. Expect even more tomorrow when players will play their own ball and choose the best score on each hole.

“We’re going to head over and help the team in the war room in the Saints’ facility.”
-Jordan Spieth