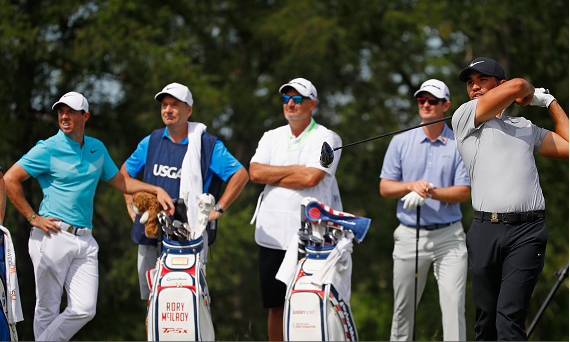 TaylorMade pulled together its marquee stars – World No. 1 Dustin Johnson, Jon Rahm (No. 2), Justin Rose (No. 6), Jason Day (No. 8), and Rory McIlroy (No. 10) – to film a series of marketing videos to promote the launch of its new Twist Face technology.

In the video, Rory starts off by talking up the technology and wonders, “Why hasn’t someone thought of this before. It seems so simple, but it’s a great piece of innovation.”

D.J. then jumps in, and raves about the forgiveness on “mishits,” of which Day concurs.

The video then transitions into some background music as the world-class long bombers tee off, and compliment one another as if they’re a fivesome in some beer league.

Whatever you think of the technology, or even the M series drivers, the fact that TaylorMade has teamed with five of the top-10 ranked players in the world to promote its brand is quite impressive.

Straight distance has arrived. The 2018 M Family is now available at golf shops around the world. #TwistFace #RIBCOR

Shop For a TaylorMade Driver With Twist Face Technology.