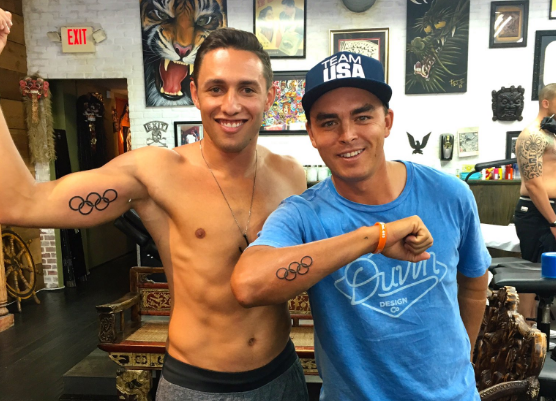 In today’s PGW Daily, today is Equipment Christmas for golf fans, Rickie has some new ink, and Team Europe is looking good in Ryder Cup prep.

Drive of the Day

It has been a tough year for Camilo Villegas. The four-time champion on tour who has reached as high at #7 in the world rankings, has not had a top 10 in nearly three years and has plummeted to #368 in the OWGR. He is now fighting for his PGA card at the Web.com finals.

What happens when lightning hits a flagstick? This is why the horn goes off when severe weather hits.

Things you'd prefer these #thunderstorms to hit than a golf green…

The Ladies European Tour put out a video with interesting facts about world #1 Lydia Ko.

.@LETgolf caught up with Lydia Ko about interesting facts you didn’t know about her. https://t.co/UPOuZt6Yp6 #Golf pic.twitter.com/tBJP1fIzWl

Speaking of Ko, evian posted a video about her pre-round routines.

Vine/Hype Video of the Day

With the Ryder Cup week starting in just 10 days, the European side is trying to get everyone hyped up.

Jason Gore lost his dad on this day, 19 years ago. He posted a pic of them together a long time ago.

Chip of the Day

Lydia Ko birdied from outside the green during the second round of the Evian Championship.

All smiles after an impressive chip for birdie on hole 5! @LydiaKo pic.twitter.com/cYvhxhOoU6

Milestone of the Day

Today is the 147th anniversary of the first hole-in-one in competitive golf history. It was recorded by Young Tom Morris.

On this day in 1869, Young Tom Morris recorded the first ever competitive hole-in-one. #TheOpen pic.twitter.com/3MFAnqXld6

At @GolfChannel @GCMorningDrive with the new @Titleist #Titleist917 coming live in 10 minutes. pic.twitter.com/QUtJVISECg

Word of the Day

Charl Schwartzel posted a one-word tweet earlier. It says “wildswinkel”. Perhaps he can let us know what it means.

Darren Clarke has to be happy with how his players are performing at the Italian Open. They are going to be a tough group to beat.

Lee Westwood had an interesting competitor make their way to the tournament he is hosting.

A big day at Titleist, a video with Webb Simpson shows the benefits of getting a driver fitting.

Why should you get dialed in with a driver fitting? @webbsimpson1 explains.
Get fit for a #Titleist917 on 9/17. pic.twitter.com/yu80USfevx