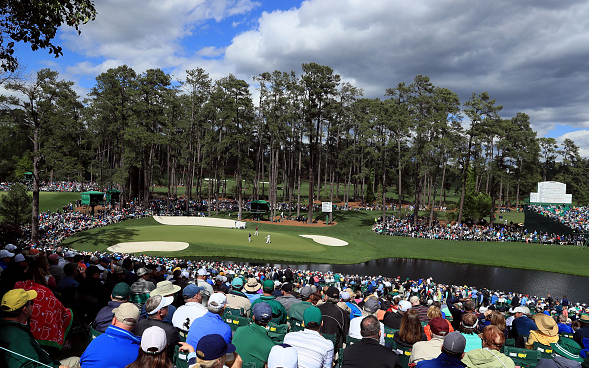 Under brutal conditions, Charley Hoffman fired a 7-under 65 on Thursday at the Masters to take the opening round lead in the 81st edition of the Masters Tournament. In total on 11 players made it to the red numbers.

Recent Memorial winner William McGirt ended at 3-under for sole 2nd, while Lee Westwood rounded out the top-3 with a 2-under 70. A group of eight players, headlined by Phil Mickelson, Sergio Garcia and Justin Rose, were tied for the fourth spot at 1-under-par.

Jordan Spieth made another quadruple bogey on the back-nine at Augusta. This time on the 15th hole.

Jordan Spieth went a full 21 holes between quads at Augusta.

Death, taxes and Jordan Spieth making birdie after a quadruple-bogey on the back 9 at Augusta. #themasters

Jordan Spieth just made a 9 on 15. It means that in his last 22 holes at Augusta he's made two quadruple bogeys. You cannot be serious.

World No. 1 Dustin Johnson had to withdraw due to a back injury he suffered in a freak accident on Thursday afternoon.

Was Dustin Johnson the worst bet in history of gambling?

The only real reason we're all pissed that Dustin Johnson withdrew from the 2017 #TheMasters. Is that we don't get to see Paulina Gretzky.

I feel awful for Dustin Johnson. Most shocking golf twist since the time Happy Gilmore got hit by a Volkswagen in the '96 Tour Championship.

Charley Hoffman is not considered a marquee name for golf fans, but leads by four after the first round.

Charley Hoffman running away with this after round 1, which means he won't be anywhere to be seen come Sunday afternoon. Remarkable.

Is there a better Thursday-Friday PGA player than Charley Hoffman?

Charley Hoffman, don't you dare ruin my favorite weekend of the year!

The Masters, Round One