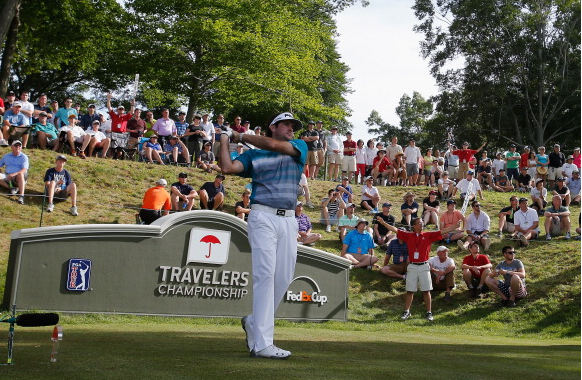 As a life-changing three-foot putt from newly minted PGA Champion Jimmy Walker closed the book on another PGA Tour majors season, we learned something. It wasn’t something new, but it was reinforced so spectacularly that it needs to be said again: the players on this tour are really, really good.

In a season that was hyped to have several generational talents at the top, it is a testament to the tour’s rich depth that all four major winners came from outside the pantheon of Jason Day, Jordan Spieth, and Rory McIlroy.

The major season was a roller coaster of emotions. We commiserated with Spieth after a quadruple-bogey 12th hole on Sunday at The Masters blighted his dream of a second consecutive green jacket. An awkwardness and anguish were palpable as Spieth placed golf’s most iconic symbol of immortality, the green jacket, upon the triumphant shoulders of Danny Willett.

At the U.S. Open, we, along with the entirety of the PGA Tour, stood united behind Dustin Johnson as a rules controversy threatened his long-waited coronation as a major champion.

In Scotland, we watched in awe at Royal Troon as a pair of 40-somethings, Henrik Stenson and Phil Mickelson, entertained us with a duel for the ages.

Then in the last major of the year, we reveled in the joy of one of the truly good guys on tour, Jimmy Walker, as he held off a furious charge from world #1 Jason Day on the 72nd hole. We were spoiled as golf’s return to the Olympic games compounded the season, giving us two thrilling majors over a three week span.

Now we begin an agonizing 8-plus month wait until the next time we will get to see these characters ferociously battle again on the major stage. Today, we are all 5-year-old children on December 26th.

That is not to say that championship caliber golf is, for all intents and purposes, over for the year. Quite the contrary, actually.

National pride will be doubled-down, as the sport’s first Olympic year in a century is followed closely by the always-intense Ryder Cup. The FedEx Cup playoffs are on the docket as well, and a lot still needs to be determined before someone is awarded that $10 million dollar bounty, the largest prizes in professional sports.

From Springfield, New Jersey, the PGA Tour will valiantly attempt the congested, unfriendly, and comically slow trek up Interstate 95 to Cromwell, Connecticut for the nutmeg state’s annual Traveler’s Championship at TPC River Highlands.

It will not showcase a field as strong as the PGA Championship did, but being reasonably close geographically is keeping many great golfers, most notably two-time Travelers champion Bubba Watson, in the region for an extra week. As a result, the tournament that has been decided by a playoff in three of the past six years promises to be great once again.

One of the longer-running, and most attended PGA tournaments, The Travelers Championship started in 1952 as the Insurance City Open, an appropriate name for a tournament that plays near Hartford, known as the Insurance Capital of the World. In 1967, it became the Greater Hartford Open.

From 1973 to 1988, Sammy Davis Jr’s famous name was even included in the tournament title. Davis often played in the pro-am tournament associated with the event.

Hartford was taken out of the title in 2004 when Buick bought the naming rights, although locals still refer to it as the Greater Hartford Open. Travelers has been the sponsor since 2007.

TPC River Highlands has held the championship since 1991, and is a classic Pete Dye design. Overlooking the Connecticut River, the course has long been considered one of the best in New England.

The event drew extra attention in 2003 when Suzy Whaley made the field through local qualifying, the first woman in nearly 60 years to make a PGA tournament field. Whaley’s inclusion lead to the “Suzy Whaley Rule” which requires women to play from the same tees as men for qualifying tournaments. Whaley missed the cut by 12 strokes.

The defending champion is Bubba Watson, the world’s No. 6 ranked golfer. Watson set the pace with a first-round 62, but was later caught by England’s Paul Casey.

A birdie on the second playoff hole gave Watson the win, his second career victory at TPC River Highlands. Watson and Casey finished one stroke ahead of Brian Harman.

In recent years, the Travelers Championship has become the Bubba Watson Open. Watson is the defending champion and career earnings leader, with nearly $1 million more in earnings than Hunter Mahan, despite making five fewer appearances. These are Bubba’s results over the past six years: WIN, T31, 4, T2, T38, WIN. That might not be Tiger Woods at Firestone good, but Watson’s game is clearly a great fit for this course.

His win in 2010 was his first career victory, and is remembered as one of the more emotional victories in PGA Tour history, something Bubba has never shied away from.

It is far from hopeless for the rest of the field, however. Watson won the Northern Trust Open in February, but his recent form has not been great, as he only has one top-25 finish (a T14 at the WGC-Bridgestone) since his runner-up at the WGC-Cadillac in early March. He was a non-factor in the majors, and especially struggled at the PGA Championship, making the cut but finishing in a tie for 60th place, needing 15 more strokes than Jimmy Walker.

Statistically, Watson has matched his reputation as one of the biggest bombers off the tee. He is 4th on Tour in driving distance at 308.7 yards. Only Dustin Johnson, Tony Finau, and J.B. Holmes hit it further. Also, to nobody’s surprise, Watson ranks 4th in par-5 scoring average.

However, he has had issues on the greens this year, currently ranking 134th in putting average, a precipitous fall from 51st last year.

Three of the four golfers who will represent Team U.S.A. at the upcoming Rio Olympics: Bubba Watson, Patrick Reed, and Matt Kuchar are in the field for the Travelers, with only Rickie Fowler taking the week off.

All three will miss the Olympics opening ceremony as a result. Based on how they played at the PGA Championship at least two of them could use the practice: Kuchar missed the cut by a mile, while Watson finished T60. Reed shot a 5-under 65 in round 2 to get into contention, but after a so-so weekend of 70-69 he finished T13, eight strokes behind Jimmy Walker. Despite the missed cut at Baltusrol, Kuchar has been in good form lately, with top 10’s in seven of his past 11 events.

It will not just be the Americans who are using Connecticut as an Olympic tune-up. Other Olympians in the field include Padraig Harrington (Ireland), Soren Kjeldsen (Denmark), and Alex Cejka(Germany).

Another reason Watson, Reed, and Kuchar are in Connecticut instead of going earlier to Rio is because all three would like to be on the U.S. Ryder Cup team. On the current Ryder Cup points list, with the top eight qualifying automatically, Watson is currently 9th, Reed 10th, and Kuchar 11th. Also in the field at TPC River Highlands is #5 Brooks Koepka, #6 Zach Johnson, and #7 J.B. Holmes.

Skipping out on the Travelers would be put any of the bubble players at a serious disadvantage. Brandt Snedeker (8th) and Rickie Fowler (12th) are taking big gambles not playing this week. Team captain Davis Love III is going to have some difficult decisions for captain’s picks (he gets four), if the standings stay the way they are right now.

Dustin Johnson, Jordan Spieth, Phil Mickelson, and Jimmy Walker hold the top four positions, and have basically clinched their spots. None of them are in the field this week.

Louis Oosthuizen– The South African, currently ranked 16th in the world was one of the bigger profile golfers skipping The Olympics. The 2010 Open Championship winner is coming off a T22 at the PGA Championship. His best finish on U.S. soil this season is a runner-up finish to Jason Day at the WGC-Match Play.

Branden Grace – Another high-profile South African, Grace made some noise at the PGA Championship with a scintillating weekend of 66-67. He applied considerable pressure to the leaders by posting early at -9. He finished T4. He also won the RBC Heritage in April, and finished T5 at The U.S. Open.

Jim Furyk – It has been a rough season for the always steady Furyk. He missed three months with a wrist injury, and since coming back, a T2 at The U.S. Open has been his only notable result. At 118th in the FedEx Cup standings, he is very much on the bubble, and could use a good showing in Connecticut.

Jon Rahm – The young Spaniard has played very well since declaring pro after a T23 at The U.S. Open. The Arizona State product finished T3 at the Quicken Loans National, his first professional tournament, and T2 at the RBC Canadian Open two weeks ago. His promising early results assure him of having a PGA Tour card for next season. He doesn’t qualify for the FedEx Cup playoffs unless he wins somewhere, so he will be giving TPC River Highlands all he’s got.

Daniel Summerhays – Similar to Branden Grace, Summerhays made noise at the PGA Championship on Sunday, with a 66. He finished at -10, which was good for solo-third. Summerhays also finished T8 at the U.S. Open. The strength of his game has been his putting, as he ranks 10th on tour in strokes gained: putting.

Robert Allenby – An Aussie star around the turn of the century, Allenby is in the midst of one of the worst seasons ever. Before making the cut on the number at the RBC Canadian Open, he had missed 17 of 18 cuts, with a high finish of T68 at the weak-field OHL Classic at Mayakoba. He ended up T63 in Canada. He is unlikely to make a presence on the leaderboard, but he has been so unbelievably bad, he may be tough to look away from.